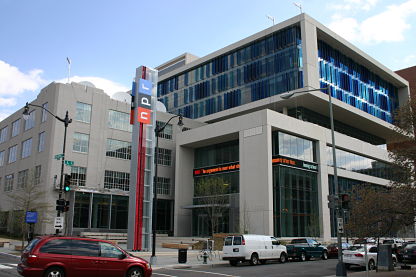 NPR started broadcasting this past weekend from its new $201M headquarters at 1111 N. Capitol St. in D.C. Photo: Ben Mook

After five years of planning and construction, NPR marked the next phase in its evolution as a national news organization with the April 13 broadcast of Weekend Edition Saturday, the first to originate from its $201 million flagship headquarters at 1111 N. Capitol St. NE in Washington, D.C.

While the 151,785-square-foot NPR building at 635 Massachusetts Ave. operated on a mishmash of technology —  from reel-to-reel tape machines to patch cords —  the new all-digital building is wired with fiber-optic cables to zip media around at high speeds and can handle content thrown at it by smartphones, among other media-gathering devices. Key features of the 440,000–square-foot headquarters include a two-story, open-design newsroom and a 250-seat performance studio.

Producers of Tell Me More, All Things Considered and Weekend Edition Saturday had trial-run rehearsals from their new studios last week. As of Monday, April 15, all three series were to originate from the new building. NPR’s newscasters are to make the switch April 19, and the Morning Edition team will produce its first show from its new space April 22.

After months of planning the move and testing the new setup, Marty Garrison, NPR v.p. of technical operations, distribution and broadcast engineering, expressed confidence that the new equipment will perform as expected. He predicted that once the NPR show teams settle into their new digs, their challenges will be in adjusting to new ways of doing things.

“We’re not worried about the technology so much,” Garrison said. “But everything is new, and it’s things like user interfaces that people are going to have to get used to. This is not a walk in the park by any means.”

Among the first NPR units to settle in on North Capitol Street was the Public Radio Satellite System, the interconnection system managed by NPR Distribution on behalf of pubradio stakeholders. It transmits programming from more than 200 producers and distributors via 400 station downlinks. PRSS completed its complicated move April 1.

To avoid disruptions to public radio interconnection during the move, NPR engineers built a duplicate PRSS, disassembled it and then put it back together in the new facility, Garrison said.

Garrison, who joined NPR in 2010 to head up the move, said the 90,000–square-foot newsroom has 18 screens that can be remote-controlled by computers at news staffers’ desktops. A high-definition television camera is also being installed so that correspondents can make television appearances from inside NPR’s newsroom.

The need to upgrade the aging infrastructure was a major impetus behind building a new headquarters.

“We were patching things up at 635 literally using technology that was state of the art in the 1920s,” Garrison said. “A lot of things were Band-Aided together and really needed to be upgraded.”

But not all the communications technology within the building is cutting-edge. When it came to rigging the new broadcast studios to take phone calls, NPR opted for tried and true legacy technology, the landline, according to Garrison. “Voice-over-Internet can have some quality issues, and we felt it was important to keep traditional landlines for the quality of the shows.”

From phone booths to digital news

NPR first unveiled its plans to build a new headquarters in March 2008, when NPR and city officials announced a deal to redevelop a warehouse built by Chesapeake & Potomac Telephone Co. in 1927. Over the years, the site had been adapted for many uses, including manufacturing phone booths and housing C&P’s fleet of repair trucks. The Smithsonian Institution had also leased the building and used it to manufacture museum exhibits.

NPR agreed to incorporate the facade of the old warehouse into its design plans for a seven-story office tower that adjoins the four-story historic structure. The D.C. government sweetened the redevelopment deal by waiving taxes on the new property for 20 years, a provision with an estimated value of $40 million, and agreeing to limit tax increases on NPR’s Massachusetts Ave. site to no more than 3 percent a year.

The deal was well-timed and became a capstone achievement in the short tenure of Ken Stern, who resigned as c.e.o. of NPR the day after the contract was announced.

Since NPR’s 1994 purchase of 635 Massachusetts Ave., the neighborhood around it had been transformed from a gritty corridor of central D.C. into a desirable location for D.C. businesses and conventioneers and a hub for nightlife, professional sports and shopping. Boston Properties purchased the old headquarters for $119.8 million. It plans to quickly demolish the building and launch construction of high-end office space.

To finance the new headquarters, NPR used $35.2 million from the sale of 635 Massachusetts Ave. and $165.8 million in tax-exempt bonds, issued with assistance from the D.C. government. The new building is located in NoMa (shorthand for “north of Massachusetts Avenue”), an area near the Capitol Hill transportation hub Union Station that is now a focus of D.C. redevelopment.

Building the new headquarters cost NPR $201 million, with $78 million of that spent on construction, according to financial details provided by NPR. Additional costs include $44 million to outfit the building for multimedia production and distribution.

According to IRS records, NPR netted $80 million on the redevelopment contract after paying off $30.4 million in debt attached to the property at 635 Massachusetts Avenue, the broker’s commission and other costs.

Current was on hand April 13 when Weekend Edition Saturday launched the first broadcast from NPR’s new $201 million headquarters on North Capitol Street in Washington, D.C. Here’s a slideshow of images.