After 16 months on the air, WQED-TV’s all-pledge multicast Showcase channel is steadily bringing in donations of around $16,000 a month for the Pittsburgh station.

That may not sound that impressive, considering WQED receives an average of $16,675 from airing just one day of pledge programming on its primary broadcast signal.

But WQED officials say the revenues, and the benefits, are adding up. Showcase generated nearly $140,000 in donations in its first year, around $30,000 more than WQED President Deborah Acklin anticipated. The channel has also added 1,270 viewers to WQED’s membership files. 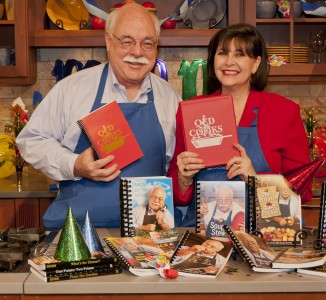 Because WQED has an extensive library of locally produced fundraising programs, it’s in a unique position to devote an entire multicast channel to pledge. QED Cooks 100, hosted by Chris Fennimore and Nancy Polinksy, is among the most popular titles. (Photo: Renee Greenlee)

When WQED, the station that struck pledge gold with nostalgic local documentaries by Rick Sebak and TJ Lubinsky’s doo-wop specials, announced plans for an all-pledge channel in October 2011, “plenty of people in the system thought we were crazy and weren’t afraid to say it,” said Acklin, who came up with the idea, a pubcasting first.

Now, several other stations have asked WQED for details on how to launch and program the channel as they consider possibilities for their own multicast lineups.

The cost of a typical station pledge drive can run much higher — as much as 30 percent to 40 percent of gross revenues, according to pubcasting fundraisers. Showcase has a lower overhead because its pledge breaks aren’t live, Hazimanolis said. In addition, premiums tied to the pledge specials that WQED produces, such as companion cookbooks to the foodie shows hosted by Chris Fennimore, are less expensive to fulfill.

WQED’s long track record of producing original fundraising shows has put the station in a unique position to earn revenues from an all-pledge-all-the-time multicast channel, said TRAC Media Services’ Kristen Kuebler, who counts herself among those who questioned the move. “I have to admit I was skeptical,” she said. “But pledges have remained consistent, and WQED has been able to get a lot of exposure for their huge local library of shows.” The producing station’s stable includes decades of Fennimore’s QED Cooks, and Rick Sebak’s documentaries celebrating local history and culture, such as Kennywood Memories and Pennsylvania Diners and Other Roadside Restaurants.

“I give them credit for trying it,” said Alan Foster of Executive Program Services, a national syndication service providing pledge programs and other fare to stations. “It’s really nice to have $17,000 at the end of the month. This is positive cash flow, so what the heck?”

“Funding for public broadcasting has been reduced and even eliminated in some states in the past several years,” he said. “If we are to continue to provide our services to the public, we must become more entrepreneurial in our thinking, with innovative ways to raise the needed dollars to continue our mission.”

Viewers are demonstrating their support for Showcase by contributing, he said. “And those contributions allow us to fulfill our mission to the community.”

“What was under our control”

Acklin conceived the idea for Showcase from all the questions she fields from fans of the station’s performance shows. “I was in line at the bank,” Acklin recalled, “and one woman recognized me from on-air spots. She asked when ‘those great Irish music shows’ would be on again. I said, ‘You’ll see them in March.’ She said, ‘Oh good, I love those.’”

Viewers’ appetites for pledge specials have shown up in TRAC’s research, Kuebler said. “Pledge programming often has a bad reputation, but there are definitely people who love those shows.”

Acklin was looking for a new source of revenues to replace nearly $1 million state funding that WQED lost in 2007-08 when Pennsylvania lawmakers zeroed out annual appropriations to all of the state’s pubTV stations. The funding, which provided unrestricted operating funds, “just disappeared,” she said.

“We looked at what was under our control,” Acklin said. At the time, the station was programming three multicast channels and considering creating a fourth. Overnight airings of doo-wop music specials during pledge drives have consistently generated $2,000 a week; Acklin multiplied the amount by 52 weeks a year, shaved off a bit for costs and estimated that a multicast pledge channel could potentially bring in around $100,000 annually. “Simple as that,” she said.

“And we’re not taking anything away from viewers to save money,” Acklin said. “We’re actually adding a channel.”

The audience response has been encouraging so far. About 40 percent of viewers pledging to the channel are new members, according to station officials. The remainder is about evenly split between long-lapsed members and renewals.

The channel’s success in reaching new members is especially interesting to Kuebler, who directs station research for TRAC. “That’s where we have been seeing the numbers declining,” she said, referring to trends affecting all public TV stations. “More pledges during drives are renewals.”

About 18 percent of callers are WQED members providing additional gifts, and some 72 percent of revenue is from donors who are either completely new to the station’s file or haven’t contributed for 18 months or longer.

Also, so far, only 1 percent of members who contribute to Showcase have joined WQED’s sustaining membership program.

Lilli Mosco, WQED v.p. of development and membership, said her “biggest fear” as Showcase launched was that it would cannibalize pledge on the main channel. So far, “we’ve found that not to be the case,” she said. The average gift on Showcase is $125 and nearly mirrors the main channel’s $127.

Not surprisingly, the viewership of all-pledge Showcase lags far behind those of the station’s other channels. Its weekly average cume during 2012 was 92,697; weekly viewership of WQED’s main channel is nearly eight times larger, at 735,842. Other channels in WQED’s multicast lineup — Create, featuring how-to shows; and Neighborhood, airing local food, history, events and health/wellness productions — draw an average of 260,492 and 301,284 viewers, respectively, audiences that are roughly three times those drawn to Showcase. (On Comcast’s local TV channel lineup, Showcase is located in a plum spot between those two.)

Acklin continues to be optimistic about the channel’s future. “Sometimes you just have to jump out and do something, and let the business model follow,” she said.