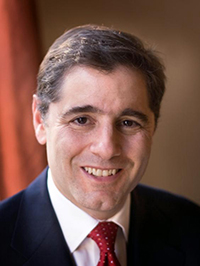 Add the Federal Communications Commission to the list of government agencies preparing for a leadership transition during the second Obama administration.

Julius Genachowski, FCC chairman since 2009, told commission employees this morning that he’ll be departing “in the coming weeks.”

Genachowski, a communications attorney who served as FCC chief counsel during the Clinton administration, was appointed by President Obama to lead the agency. During his tenure, he oversaw implementation of several policies affecting public media, including development of a national broadband plan for reallocation of broadcast spectrum, and adoption of new rules for expanding low-power FM stations approved in November 2012.

Larry Miller, a Washington-based attorney who represents many public media stations, described Genachowski’s resignation as a “non-event for public broadcasters.”

Freeing spectrum for mobile broadband use was a top FCC priority under Genachowski’s leadership, and he departs as the agency is midway through a notice of proposed rule-making on voluntary auctions of television spectrum.  The commission is reviewing the second round of comments on the NPRM and has yet to define how the auctions, which were to be completed by the end of 2014, will proceed.

“We’ve taken big steps to build a future where broadband is ubiquitous and bandwidth is abundant,” Genachowski said when announcing his departure. He called for the commission to press forward to refine its spectrum policies, saying, “Our agency cannot rest on its laurels . . . .  We need to free up even more spectrum for mobile broadband.”

“I don’t think public radio has been top-of-mind for the chairman,” Virtue said, adding that the chairman’s push to free up more spectrum “damages a lot of my clients who want more spectrum, particularly on the TV side.”

As FCC chairman, Genachowski did not treat public broadcasters differently from commercial ones, Virtue noted. “I think everyone’s in that same boat. In the quest for spectrum, nothing is sacred. Everything’s on the table,” she said.

“When Julius Genachowski took office, there were high hopes that he would use his powerful position to promote the public interest. But instead of acting as the people’s champion, he’s catered to corporate interests,” Aaron said. “Genachowski claimed broadband was his agency’s top priority, but he stood by as prices rose and competition dwindled.”

Genachowski didn’t say what he plans to do after departing the FCC.

Genachowski’s announcement comes two days after another high-profile FCC exit: Republican Commissioner Robert McDowell announced his resignation March 20, leaving the five-member panel with three Democrats (including the soon-to-depart Genachowski) and one Republican. Because Genachowski waited until McDowell’s departure to announce his own, the panel will preserve its Democratic majority.

The Obama administration has not yet identified its favored nominees to fill the vacant FCC posts. All appointments to serve on the commission are subject to Senate approval.

The FCC’s top job isn’t the only vacancy in the federal government that affects public media: six of nine directors’ seats on the CPB Board are empty.

Obama recently appointed two candidates to the fill the positions: Bruce Ramer, a Los Angeles attorney who was renominated for a second six-year term, and Jannette Lake Dates, a Howard University professor who was appointed as a new director. Both await Senate confirmation.