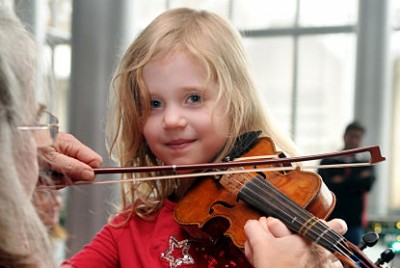 In this 2012 photo from an Instrument Petting Zoo hosted by Seattle's KING-FM, a girl learned how to hold a violin. Photo: Jack Storms

In this 2012 photo from an Instrument Petting Zoo hosted by Seattle’s KING-FM, a girl learned how to hold a violin. (Photo: Jack Storms)

The funeral dirge has been played many times for the classical music radio format, but after decades of decline on both commercial and public broadcasting, the tune has changed to a major key, and the melody has sweetened.

In public radio, the number of stations dedicated to the music has rebounded, with a 40 percent increase from 2011 to 2012. The conversion of commercial classical stations to public radio has been one of the driving forces behind this growth. The latest to make the switch, Cleveland’s WCLV-FM, kicked off its inaugural pledge drive earlier this month.

In its 2012 overview of audience trends in public radio, Arbitron reported that 178 broadcast and streaming classical music stations met the agency’s rating reporting standards, up from 109 stations in the 2011 edition of Public Radio Today. This total, for the first time, included not just radio broadcasters’ primary signals but also their HD Radio multicast streams.

“There are more all-classical stations in public radio than there ever have been at any point in time,” said Tom Thomas, co-c.e.o. of Station Resource Group. “And it has now almost exclusively become a public radio enterprise.”

“I feel pretty optimistic that all of the predictions of doom haven’t turned out,” said Arthur Cohen, president of Public Radio Program Directors Association. “There is definitely not a loss of stations, and I don’t think there are any major markets left without a full-time classical station.”

But while the number of classical music outlets is up, the format still faces  major challenges in bolstering its listenership. With a few exceptions, classical stations in most major markets have lost listeners year after year, according to Joanne Church, president of the Radio Research Consortium. Of the 15 largest metro markets with a single classical station, 13 saw audience declines and one recorded a slight increase. Seattle’s KING-FM, which converted from commercial operations in 2011, saw gains of 6 percent in its first year as a noncommercial station.

“When you see the same kind of declines at station after station, you have to ask yourself, ‘What is going on?’” Church said. “If this was just a single year, you could say, ‘Okay, it’s an anomaly,’ but it’s been going on for a while.”

Although there is some evidence that audiences for classical music are becoming more diverse and younger, the shift hasn’t altered the overriding demographic trend of an aging listenership. Arbitron’s 2012 Public Radio Today showed 70 percent of the listeners to classical stations were at least 54 years old.

Despite the audience challenges, the upswing of classical public stations is a major shift from 2006, when the National Endowment for the Arts chided public broadcasters for abandoning classical in favor of more lucrative news/talk programming. A year before, WETA dropped classical to go all-news. The station quickly resumed classical broadcasting in 2007, when commercial WGMS dropped the format. WETA became the sole classical broadcaster in the nation’s capital. KUSC also benefited when it became L.A.’s last full-time classical station that year. Both stations initially enjoyed big audience gains.

In other cities, as commercial broadcasters backed away from classical programming, public broadcasters stepped up to buy a frequency and keep the music playing over radio airwaves. Signal expansions by New York Public Radio, which purchased WQXR, and Boston’s WGBH, which bought WCRB and rebranded it All Classical 99.5, followed this pattern. In Houston, KUHT bought the frequency of Rice University’s student-operated outlet and converted it into a classical station. These signal expansions allowed pubcasters to serve classical-music lovers while devoting their flagship frequencies to news and talk, the most powerful public radio format.

“There is a lot in motion in the classical world right now,” Thomas said. “The service is in a very different place in its role, especially in major markets, than was the case five years ago when in a number of places it seemed to be in retreat as public stations were switching to news and other formats.”

End of the commercial era

In June 2002, Media Life magazine reported that the number of commercial classical stations in the United States had dropped from 48 to 34 over the previous decade. (The article was titled “The slow death of classical music.”)

In its 2006 report, the NEA reported that changes to the Telecommunications Act in 1996 triggered sales of commercial classical stations in many markets. The value of broadcast licenses soared after limits on media ownership within a market were lifted.

The number of commercial classical stations has only continued to dwindle. By some estimates, in 2013 there are only six left in the country.

As the number of commercial classical stations declined, those that remained faced steeper challenges in sticking with classical music, said Robert Conrad, co-founder and president of WCLV. His station, which has broadcast classical music in Cleveland for 50 years, began operating under a noncommercial model last month and is now run by Cleveland’s ideastream.

It had become increasingly difficult to sell ads to national advertisers as a commercial outlet, Conrad said. “We became dependent on local advertisers because of that, and then there was the general malaise in advertising that hit everyone in 2008 and on, which was pretty bad,” Conrad said. “So, we thought the future of WCLV as a commercial station was probably not very good.”

WCLV turned down many interested buyers over the years, Conrad said, because he was intent on preserving the classical music format.

“We had plenty of offers for the station, including one in the 1990s for millions and millions,” Conrad said. “But they were interested in the frequency, not WCLV as a classical music station, and it’s never been my intention that the station disappear. Preserving WCLV and making sure there is classical music on the air has been the ultimate goal.”

In the end, he concluded that moving WCLV under ideastream’s umbrella was the best option. To ensure that it converted on the strongest financial footing, the transfer was structured as a donation, not a sale, Conrad said. WCLV entered its inaugural fundraising drive debt-free.

In Seattle, KING-FM has more than a year of noncommercial operations under its belt. Since the switch took effect in May 2011, the station has met or exceeded goals laid out in its five-year strategic plan, according to Jennifer Ridewood, g.m. And it has bucked the audience trend affecting other classical stations by gaining audience.

“We attribute that to two things,” Ridewood said. “The first is obviously not having commercials. The second is that we’ve tightened up the programming to what the community was asking for. Not having to spend that time on commercials means we have been able to widen the breadth of the offerings and dig deeper into the playlists for a wider variety.”

KING’s transition was bolstered by $2 million in donations, including a one-time grant of $250,000 from the Bill & Melinda Gates Foundation. Listeners have been more generous in supporting the station than anticipated — the average donation is $120, 20 percent more than had been expected, and underwriting revenues are projected to hit $600,000 this year.

The remaining commercial classical stations include Dallas-based classical stalwart WRR-FM. The 100,000-watt station, which has been broadcasting since 1921, is owned by the City of Dallas and is the oldest same-owner station in the country.

Another is 61-year-old WFMT-FM in Chicago, a commercial classical station with an admitted noncommercial bent. It is owned by Window to the World Communications, licensee of Chicago’s primary public TV station, WTTW.

“As we look ahead to 2013 and beyond, we don’t think things have ever been better for WFMT,” Robinson said.

But he said the station has not ruled out the possibility of someday switching to a full noncommercial operation.

“There are no plans to change. Advertising is up and we’re ahead of pace going into 2013,” Robinson said. “But changing to noncommercial is always going to be in the back of our heads. For now, though, we’re happy with how things are going.”

Those who have followed the classical format through its decline and rebound acknowledge that boosting audience numbers is an important goal if the music is to play on. Broadcasters aren’t vying against each other for listeners within their markets, but the competition is steeper than ever.

“Any fretting going on is going to be about what’s going to happen in the future, as opposed to what’s happening in the present,” PRPD’s Cohen said. “In my opinion, it’s going to come down to how good we are at curating compared to an algorithm.”

RRC’s Church agreed that stations need to find ways to work together to rebuild the audience for classical radio.

“Over the next year, I hope the major-market stations will start looking hard at these numbers,” she said. “Some are not doing as well as they were a few years ago, and they need to ask themselves, ‘What’s wrong, and how can we fix it?’”

Closer collaboration among classical broadcasters is a goal of the Association of Music Personnel in Public Radio, according to President St. John Flynn, program director at KUHA, Houston’s new classical station. AMPPR plans to work to build broadcasters’ expertise and know-how in adopting tools of the digital age — online streaming, podcasts, apps and other technology — and to help them reach audiences on other platforms.

For most stations, the days of programming music just for radio listeners are over, Flynn said. They’re becoming more adept at distributing content on a host of different platforms.

“A lot of the stations are very excited — the format is changing, and it’s lost a lot of its old stuffiness,” Flynn said. “And while it might sound weird to say it, it’s become a lot hipper.”