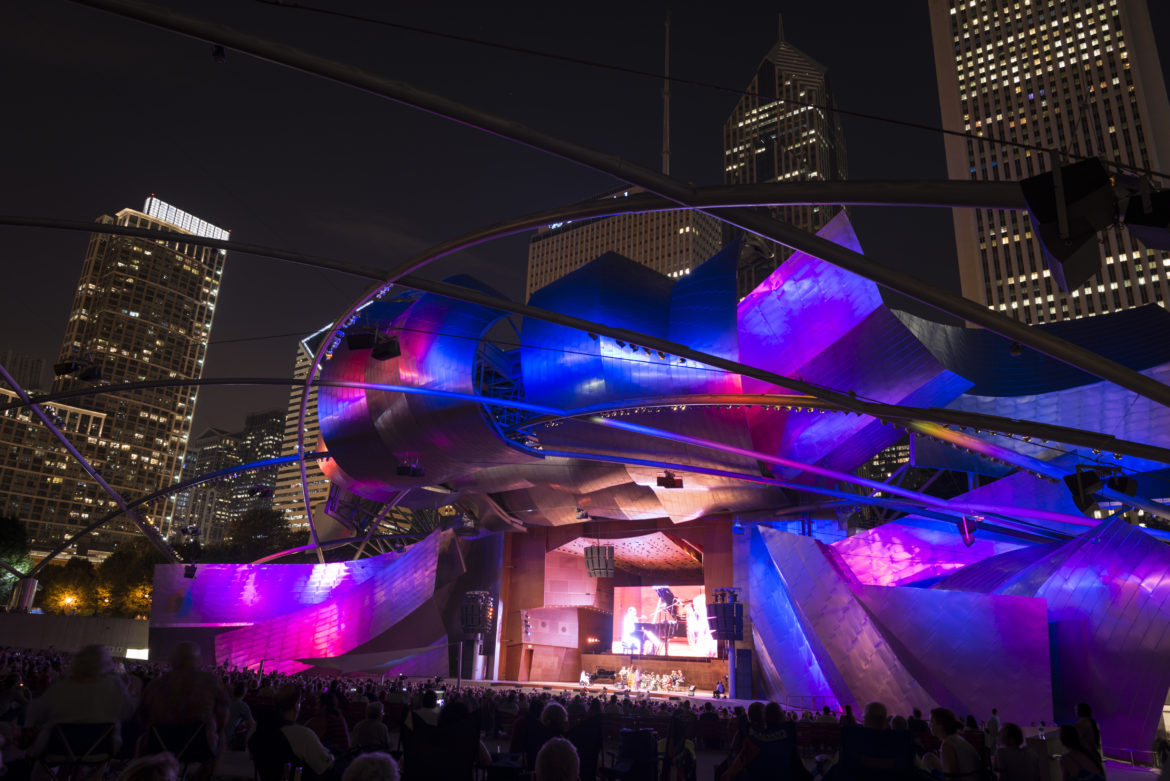 Courtesy of City of Chicago

The Jay Pritzker Pavilion in downtown Chicago will host the 2017 Chicago Jazz Festival.

During the Chicago Jazz Festival Thursday through Saturday, broadcasters from two Chinese stations, the BBC, the Austrian Broadcasting Corporation and WBGO in Newark, N.J., will visit the festival and collect audio and interviews to customize for their air. Any member of the European Broadcasting Union will be able to broadcast audio and special features from the festival.

“We’re not just saying here’s a finished program, but we’re giving them almost their own DIY kit where they can assemble it however they want to back in their local countries,” said Tony Macaluso, director of network syndication at the WFMT Radio Network. “But [we’re] still getting them the audio rights cleared and setting up all the interviews.”

Hosts from Chicago-area noncommercial jazz station WDCB will air the festival live in partnership with WFMT hosts. WFMT will add programming from the festival to the lineup on its syndicated Jazz Network feed, which airs on more than 60 stations.

The WFMT Radio Network was created more than 40 years ago to syndicate the Chicago Symphony and Lyric Opera of Chicago nationally and internationally, according to Macaluso. Its distribution of the jazz festival programming comes as WFMT Radio Network rethinks “some of the ways the radio network functions,” he said.

The network approached the Chicago Department of Cultural Affairs about partnering to expand the reach of the jazz festival. The WFMT Radio Network is looking to be “more decisively and more fully behind the idea of finding special things happening in the Chicago arts and culture world to make available globally through radio and the Radio Network,” Macaluso said. The jazz festival fits with that mission.

As the network discussed partnerships with stations outside the U.S., “one of the messages we’ve heard again and again was, classical programming is great, but you’re coming from the United States and Chicago. What about jazz? It’s an original American art form, and there’s not a lot of great jazz programming going out to stations elsewhere outside the United States,” Macaluso said.

For the network, “this is a more concrete way that we can be using all the different resources and connections that we built up over recent years to try to take some meaningful culture from the city and try to help raise the profile of it,” Macaluso said.

The network and its partners, which include the marketing organization Choose Chicago and the Chicago Department of Cultural Affairs and Special Events, have not determined whether they will cover future jazz festivals, according to Macaluso. But the network hopes to continue the effort if it goes well this year, he said.

“It’s just a great chance to experiment a little bit with how to do this sort of thing and whether we then transfer it to other music festivals or arts projects, not necessarily even in Chicago,” he said.