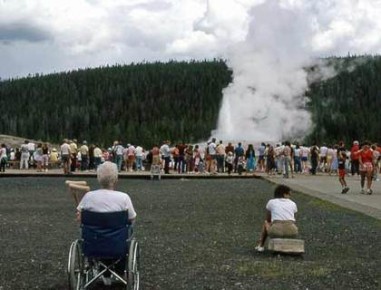 A pitch for a story about handicap accessibility in national parks, proposed last June by the independent news site Yellowstone Gate, is featured prominently on the Spot.us homepage. In seven months, it's earned only five of its requested 750 credits. (Photo: Yellowstone Gate via Spot.us)

Spot.us, the crowdfunding website allowing journalists to raise funds for their reporting projects, has been hit by a sharp decline in usage since its acquisition by American Public Media, which has been making changes intended to revamp its business model and protect the site’s journalistic integrity in the world of online pitch funding.

APM acquired Spot.us in November 2011 from founder David Cohn, a move that was to add a new element to its Public Insight Network, the database providing sources and subject experts to journalists and news organizations (Current, 3/26/12). But synergies between the two platforms have yet to be realized.

A pitch for a story about handicap accessibility in national parks, proposed last June by the independent news site Yellowstone Gate, is featured prominently on the Spot.us homepage. In seven months, it’s earned only five of its requested 750 credits. (Photo: Yellowstone Gate via Spot.us)

APM has implemented a new system for making contributions, added new types of appeals and implemented a set of criteria to ensure journalistic integrity of the pitches that appear on Spot.us. But, according to a recent analysis by the PBS.org blog MediaShift, usage and support of Spot.us has dropped precipitously, as personnel changes at APM and efforts to vet journalism projects that seek funding on Spot.us have dampened activity on the site.

The site doesn’t give web visitors a sense of timeliness or robust activity. Some featured projects on the homepage, like a pitch for a Chicago-area circuit court investigation, are nearly a year old; one pitch about the Northern California wine industry labeled “almost funded” requires more than 2,000 credits and is eight months past its initial funding goal. A prominent link purporting to provide more information about how to “Earn Credits” directs to an inactive page with no information.

Linda Fantin, director of PIN and the APM executive currently overseeing day-to-day operations of Spot.us, said APM bought the site with a different intention than simply expanding its usage. APM wanted to revamp its business model so the site would become financially self-sustaining, Fantin said.

“We weren’t really focused on whether it slumped or not. The goal wasn’t to maintain that level of activity. The goal was to develop a model that could scale and sustain,” Fantin told Current. During its first several months of operating Spot.us, APM focused on revamping its back end, rather than trying to drive user engagement.

Under Cohn’s two-person operation, Spot.us collected 10 percent of all pitch income, and this revenue model was financially unsustainable over the long term, Fantin said. Before APM acquired Spot.us, the site had been supported almost entirely by grant funding, she said.

In addition, APM saw some very high-profile exits in its digital staff shortly after its purchase of Spot.us. In March the network laid off Joaquin Alvarado, senior v.p. for digital innovation, who had played an instrumental role in the acquisition. The next month, Cohn, who had planned to stay on board in a consulting role, left as well, taking with him his site’s other founding employee, chief technology officer Erik Sundelöf. Then in October, PIN’s co-founder and project manager, Andrew Haeg, left to pursue his own startup.

Between the many personnel changes, Spot.us became a sort of testing ground for what public media could and could not do in a crowdfunding space. To reduce the site’s transaction fees and administrative costs, APM converted the pitch currency from dollars to a credit system. It also experimented with pitches for covering entire beats rather than specific stories, as well as partnerships with news organizations instead of individual freelancers.

The beat pitches, which solicit as many as 50,000 credits as opposed to the couple thousand that individual stories request, haven’t fared well. The partnerships have been more successful, securing funds for public media outlets such as the Center for Investigative Reporting.

One of the most significant changes APM made to Spot.us was a six-point screening process for all pitches, which can be made by individuals or news organizations. Cohn had developed a review system, but his working version had been less rigorous.

Journalists seeking to place pitches on Spot.us have to go through a much more extensive vetting process, and it can take anywhere from 24 hours to several weeks of back-and-forth with APM staff to gain approval. Those that don’t meet APM’s standards for journalistic impartiality are rejected. Under the new criteria, Spot.us pitches must:

This additional editorial oversight during the initial stage of story pitching differentiates Spot.us from the rest of the crowdfunding community. Crowdfunding giant Kickstarter, for example, places very few filters on projects it accepts, which include journalistic pitches among many other types of creative endeavors. This open-door approach attracts a huge number of pitches and donations (more than $319 million was successfully raised in 2012), as well as criticism for a lack of thorough vetting. Like Indiegogo and other fellow crowdfunders, Kickstarter places the burden of discretion onto its users rather than its staff, and advises its users to research projects and their creators before backing.

The increasingly crowded crowdfunding market is another challenge for Spot.us, Fantin said. APM adopted the pitch criteria so that Spot.us would more closely mimic the relationship between reporters and editors, and weed out pitches that were actually advocacy or propaganda masquerading as journalism.

“It goes to journalistic integrity,” Fantin said. “Our reputation is on the line along with anyone else’s, so we want to make sure we’re not simply funding projects that have already been done [or] that may have a bias.”

Establishing journalistic integrity was a priority for APM, even if it came at the cost of a strong pitch network. “Making sure that we set clear guidelines and gave people clear guidance on what could be funded” was an important part of strengthening Spot.us as a crowdfunding platform for journalism, Fantin said.

APM’s approach to innovation is “one of iteration,” she said. “It’s one of tackling big challenges, doing a lot of experimentation, constantly evaluating what we’re doing and then building on and trying to find where the success is.”

As for the integration between Spot.us and PIN, there’s no evidence of it on the PIN website; Fantin says the preexisting state of PIN made it challenging to rush the integration.

Though Cohn has been less involved in the post-acquisition Spot.us than he had initially planned, he nevertheless understands what APM is up against.

“On a certain level, any institution of a certain size has difficulty dealing with small [businesses],” Cohn told Current. “I would almost call that a law of nature or a law of business — not something unique to public media. I think in public media we feel it a lot more because it has such a great brand, and we want nothing but the best for it. Whereas when AOL does an acquisition and it doesn’t work out so much, some people have schadenfreude.”

“Here’s the thing that public media has going for it — and I hope and I think will always have going for it — which is an unbeatable brand,” Cohn said. “I believe in it and I think it has every potential to do awesome things. It’s just, you know, it’s tough. It’s tough for anybody.”