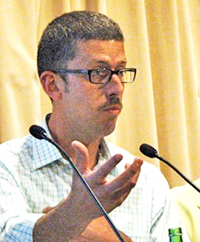 Three years ago I attended an Aspen Institute roundtable on public media. There I met my two future employers — CPB President Pat Harrison and American Public Media founder Bill Kling — along with a slate of public broadcasting leaders, producers and a few outsiders. Two weeks later I would deliver a keynote at the Integrated Media Association conference in Atlanta that put me on the path I now conclude.

I came as an outsider who had been working on broadband innovation in digital media and community development. Public broadcasters and I spoke different languages. The night before the keynote, a small group of us closed this gap — and a bar down the street from the conference.  I won’t name names, but we got back late. The morning of the keynote, my Spidey sense was tingling. Things were possible.

Pat Harrison and Bill Kling share many of the same strengths. They are fiercely intelligent, instinctively protective, yet courageous. They are direct and unencumbered by self-doubt. I respect people with those qualities. They encourage risk-taking and accountability. They create clarity.

“The architecture of public media has to be reimagined immediately or the millennials will build their own parallel universe separate from the public broadcasting universe their Boomer grandparents live in.”

After my IMA keynote, a woman from Florida approached me and shared her story of community engagement and education efforts at her station. Her story moved and uplifted me.

She taught me something I rediscovered at a hundred stations I visited: There are good, smart people working for public broadcasting who get buried inside of institutions. Their power should not be dismissed. They can be ignited. Outsiders can see these things with fresh eyes. People work in public broadcasting because they believe in it. Organizations often struggle to recognize the potential of their own teams and frequently fail to develop environments that empower them.

Unfortunately, these authentic voices go missing when the system meets to solve its challenges and imagine its future. I spent many hours in conferences listening to lingua-conferencia and not enough truth-telling.

It’s the people who don’t make it to the meetings who have the best ideas. If the system viewed itself from the bottom up, it would see with many more lenses and speak with many more voices. It would stand a better chance of stimulating creative destruction and true innovation.

I had the privilege of working with an incredible team at APM. We transformed the Public Insight Network in new and important ways. Our partner newsrooms took ownership and challenged us in ways that made the PIN stronger. The PIN is about collaboration. It is about listening and responding to the communities we serve.

Journalism in our country continues to suffer life-threatening injuries, some self-inflicted. The PIN is a unique part of the solution. It pains me to no longer be a part of it. I know it will continue to do great things and I will remain a rabid fan of the people who make it happen. My time with APM taught me a tremendous amount about public broadcasting and the dynamics of innovation. I am grateful for the opportunity and accept any failures as my own.

Change cannot be a complaint. It cannot be motivated by frustration or disapproval. Change is a creative enterprise. It requires courage and clarity. Change is about realization, not real estate. We cannot occupy our way to it. If we seek change, we must accept responsibility for creating it. We must take risks — personal and institutional.

The ratio of risk-takers among the stakeholders is not high enough in public broadcasting to motivate significant change. The ratio can rise, however, if leaders act with that intention and take responsibility for bringing the outsiders into Public Broadcasting.

System leaders, middle managers and board members are eerily homogenous. Among them are the endangered species of public broadcasting: female CEOs and general managers, nonwhite program directors and talent, and people under the age of 40.

The lack of diversity in public broadcasting should be someone’s responsibility. Whose is it? Who gets fired when we fail on our public commitments to diversity?

People tend to take risks when we have to. We change when we run out of options. But so far public broadcasting has not run out of options. There are many ways for it to continue operating without significant change. Defense is a good position for those who find the status quo acceptable.

This is the question I confront now. Is the status quo acceptable? The recommendations from that first Aspen Roundtable in February 2009 included this point: “We need a new architecture for our service. We must preserve the strongest elements of the current station community — those that have captured a place as significant community institutions through important local programming, meaningful community engagement, evolution toward multiple services, and disciplined management and governance. We must leave behind costly infrastructure in outposts that add almost no value to the content delivery chain or net financial resources to the collective mix. And we must incorporate new public media participants who come without benefit of a noncommercial broadcast license.”

Harrison and Kling both invested in moving the system forward with these principles. This kind of thinking — intelligent and courageous — attracted me to public broadcasting. It continues to motivate me as I leave. It is still worth fighting for. The transformational model for journalism has not been built yet. Mobile and social networks have exploded with possibilities. The Arab Spring and recently the Kony 2012 phenomenon should be enough of a hint that the next generation is not waiting for public broadcasters to figure it out.

The architecture of public media has to be reimagined immediately or the millennials will build their own parallel universe separate from the public broadcasting universe their Boomer grandparents live in.

I was born into a generation sandwiched between the two. My children see the world differently and have expectations different from mine. I have a lot to learn from them.

I’m stepping back after three years as an insider. I missed too much time with my family. I will be listening, learning and reawakening my sense of possibility and purpose. Being on the outside requires the faith and discipline to create the future. Both are coming back to me now.

Joaquin Alvarado lives in Oakland with his wife Becki and children Dylan and Athena. He serves on the boards of the Center for Investigative Reporting, DEI and TechSoup Global. Email: mobinema@mac.com. Photo: Alvarado at Free Press forum, October 2011, by Current.Copyright 2012 American University

Alvarado pushed the expansion of APM’s Public Insight Network sourcing tool for reporters beyond APM-related stations to dozens of others plus some newspapers, 2011.

CPB adds incentives for diversity and innovation to its program grant criteria, 2010.

In a 2010 commentary in Current, Alvarado urges public media to invest heavily in digital delivery of its most important content in selected regions to demonstrate what it can do.

MinnPost in Twin Cities reports the layoffs of Alvarado and four staffers working with him, March 2012.

Before joining CPB, Alvarado was director of the Institute for Next Generation Internet at San Francisco State University.

Kony 2012 is a half-hour documentary viewable on YouTube and elsewhere that raises awareness of the barbarous behavior of Ugandan rebel Joseph Kony, which also is meant to demonstrate the power of social media. Invisible Children, the San Diego-based, group ($13 million revenue, fiscal 2011) behind the film, advocates the arrest of Kony, claiming it abducted 30,000 children in central Africa and enslaved many of them as soldiers. PRI’s The Takeaway reports on the campaign March 11.