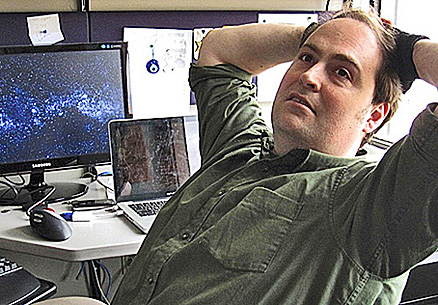 “I see Twitter as the newsroom where I spend my time,” says NPR’s Carvin.

Carvin’s monitors at NPR are his windows on the nonstop action and analysis of the Arab uprisings, from Tunisia to Oman. (Photos: Mike Janssen.)

On a recent afternoon at NPR, Andy Carvin was watching a video of a protest purportedly shot in the Syrian city of Homs, a locus of that country’s uprising against its repressive regime.

The video’s location surprised Carvin, considering the firepower the government has unleashed on the city to quell the uprising. As he often does, he looked for telltale landmarks in the background, listened to the chants and accents of the protesters, and checked if the weather in the video matched the day’s forecasts. He ended up asking his Twitter contact who had disseminated the video for more verification.

This vetting process occupies most of Carvin’s workdays. At first glance it looks much like the daily routine of many journalists, but it’s how Carvin became the talk of journalistic digerati a year ago, when he channeled his social-media savvy as a one-man newsroom covering the Arab Spring’s rolling upheaval.

He kept tabs on the Twitter feeds of hundreds of activists, bloggers and journalists in the countries where revolts ignited. He didn’t just retweet content without comment but vetted it, asking for confirmation, sourcing, more details, playing his followers against each other as if he were an assigning editor of an incorporeal newsroom.

He became a dogged beat reporter, far removed from the scene but covering it at all hours, exposing his messy and complicated process for all to see.

The exhaustive tweeting, which for a stretch occupied him as many as 19 hours a day, seven days a week, made him the equivalent of a household name in digital and media circles. At the South By Southwest conference last year, blogger and media critic Jeff Jarvis proclaimed that “all roads now lead to Andy Carvin.” Rob Bole, formerly v.p. of digital media strategy for CPB, called Carvin a “rock star” and a “visionary.”

Speaking at the Integrated Media Association conference in Austin this month, NPR President Gary Knell said Carvin has “done amazing things. . . . I literally felt I was on the ground at Tahrir Square. We need to be able to do that on the local level as well.”

Yet a year after the Arab Spring, Carvin remains a rare breed. More journalists are using Twitter to find stories and connect with sources, but Carvin says few use it as he does. He sometimes writes for NPR’s website, but his Twitter activity rarely yields full articles. Instead, the nonstop chatter among his networked community serves as both process and product.

“It’s not that I’m just using Twitter and integrating other forms of journalism,” he says. “It’s that I see Twitter as the newsroom where I spend my time.”

Like Knell, promoters of innovation at the intersection of new media and newsgathering want to see Carvin’s techniques and gusto spread more widely — particularly since the futuristic sci-fi solution of cloning Carvin isn’t yet possible. The John S. and James L. Knight Foundation cited Carvin as an inspiration for its latest Knight News Challenge, in which it seeks to fund novel uses of existing digital platforms.

“What could we learn and build out, so that we don’t all have to have Andy’s expertise, background and intensity to do a good job and tell stories from the constant flow of information that we’re now exposed to?” asks John Bracken, director of journalism and media innovation for the Knight Foundation.

“I see Twitter as the newsroom where I spend my time,” says NPR’s Carvin.

From Bhutto to Ben Ali

Though his documenting of the Arab Spring may seem like a sudden outburst, Carvin explains that it grew from a career of working with new media, blogging, Twitter and the Arab world.

He first became interested in new media’s potential as a teenager in the early ’80s, when he was growing up in Florida and first started using the Internet. Nearby NASA had set up bulletin boards and dial-up services for public use, giving Carvin a leg up on using online communities. “I’m probably the oldest digital native out there,” Carvin says.

His first job out of college was a CPB fellowship for which he created a website about education and the Internet. He continued to focus on digital issues, later serving as director and editor of the Digital Divide Network, a community of citizens and professionals looking for ways to improve access to communication technologies.

That work introduced him to many bloggers, and he got to know the creators of Global Voices, a Boston-based web project that gathers citizen media from all over the world. “He had an enormous number of contacts,” says Ethan Zuckerman, co-founder of Global Voices. That would become essential to the Arab Spring coverage that he would later mount, Zuckerman says.

Carvin joined NPR in 2006 as senior project manager for online communities. The term “social media” wasn’t yet in wide use, and NPR was unsure of its aspirations. Carvin had been working on collaborations between professional and citizen journalists  and wanted to extend those efforts. He began assisting with the network’s coverage of the 2008 election and major disasters, such as the earthquakes in Haiti and Japan.

Meanwhile, he was exploring Twitter, which he had joined in 2007. His “aha” moment came when he was stuck at an airport and learned that former Pakistani Prime Minister Benazir Bhutto had been assassinated. Carvin and his Twitter contacts began monitoring news channels and corresponding with people in Pakistan to learn details.

“From that point onwards I started thinking, ‘Okay, I need to experiment with this more,’” he says.

The outbreak of protests in Tunisia in late 2010 caught Carvin by surprise. He had visited the country and was familiar with the nature of the police state there. He began his Twitter onslaught and, when protests began in Egypt, he just kept going. At times he was covering uprisings in half a dozen countries at once, tweeting into the wee hours of the morning, grabbing a few hours of sleep and diving in again.

“It was thrilling to watch what he was doing and to watch the events unfold,” says Jane McDonnell, executive director of the Online News Association. “But, also, the way that he shared it with folks was really inspiring.”

Freedom to experiment — and err

In the early days of his Twitter frenzy, only NPR’s Foreign Desk and some of its breaking-news bloggers knew what Carvin was doing. His higher-ups started paying attention only when he began to draw attention from other websites and publications.

Although he had abandoned his work of managing NPR’s Facebook presence to cover the uprisings, no one questioned what he was doing. One executive said to him, “I don’t understand what you’re doing, but please keep doing it.”

NPR’s willingness to give their chief tweeter free rein is often overlooked, say Carvin and other digital-news advocates, and they regard it as key to his success. “I can’t think of any other news organization that would not only have done that, but that wouldn’t have fired me for neglecting my official duties,” Carvin says. “The latitude that NPR has given me has been absolutely extraordinary.”

“You can’t actually figure these things out without a lot of time and trial and error and falterings,” says Jay Rosen, a media critic and journalism professor at New York University. “And when you aren’t given that time, it’s really hard.”

Such experimentation is not without risk. Carvin sparked debate in February when he retweeted a link to a gruesome video of Syrian children maimed in violence amid the rebellion. Some readers and colleagues said it went too far. Carvin and others responded that he gave fair warning about the nature of the video, and that his followers had already opted in to his content, in a sense, by following his feed.

And when Rep. Gabrielle Giffords was shot near Tucson, Ariz., last year, Carvin and others at the network mistakenly reported that she had been killed. The network quickly retracted the news, but not before the tweet had been retweeted numerous times.

“One response for a pre-Internet news organization might have been to throw their hands up in the air and shut down the Andy Carvin Experiment,” says Bracken of the Knight Foundation. “They put new policies in place, but they didn’t turn off Andy Carvin. And I think that’s a really important point.”

Carvin’s Twitter experience has given him ideas for innovations he’d like to see, of the sort that could stem from the Knight Foundation initiative. He wants tools for verifying information more rapidly and for analyzing how sources connect to each other, which might help journalists assess the credibility of social-media sources more quickly.

He also needs help winnowing the many messages he gets from his Twitter audience, which on some days can climb to 2,000.

“I would love to have some form of tool that serves as triage for those @replies,” he says, “so I know that these are the people who are likely to be most credible . . . so that I have the ability to whitelist or blacklist people and see their degrees of separation from each other — all sorts of factors like that to help expedite the process.”

Yet, ultimately, the crucial ingredient may be something no algorithm will ever duplicate. “It still boils down to judgment,” Carvin says.

How’s that cloning technology coming along?

As this article was published, Carvin was winning the journalist category of the Shorty Awards for short content in social media.. Other winners of interest: Brendan Maher of Nature magazine in the science category; Best Overall Brand Presence on Facebook: Nickelodeon: SpongeBob SquarePants; Best Overall Brand Presence on Tumblr: BBC America: Doctor Who.

The tweeting continues at twitter.com/@acarvin.

Carvin created a Storify chronicle of the Tunisian revolution but was too overwhelmed by the events of Egypt to do the same for that country.

In an otherwise lackluster year for what he calls “pro-am journalism,” media critic Jay Rosen gave Carvin an A+.

In his announcement of the latest Knight News Challenge, John Bracken cited Carvin as an inspiration, calling him a “one-man aggregation vehicle, someone who successfully leveraged a network to tell stories and engage communities.”

NPR’s ombudsman reviews the controversy over Carvin’s retweeting of a graphic video of wounded Syrian children. “As someone who has fought in and covered wars, I also think that for some of our armchair warriors who — for either nationalistic or humanitarian reasons — are so quick to send young men and women into war, it is good from time to time to have a reminder of the human costs,” wrote Edward Schumacher-Matos.

Rob Bole, formerly of CPB, calls Carvin “a rock star and a visionary.”

Carvin receives a Knight-Batten Award for Innovation in Journalism, 2011.

Al Tompkins of the Poynter Institute interviews Carvin about the role of social media in covering Hurricane Gustav, 2008.

Fans can get an “I was retweeted by @acarvin” T-shirt.