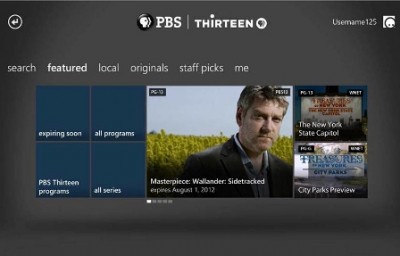 A screenshot of the Xbox Live app from PBS that will make local station programming and a limited selection of national content available to users of the gaming console as well as owners of Roku video streaming boxes.

This item was updated on May 13, 2013 with additional information

PBS is jumping into the “over-the-top” video-streaming space with a pair of deals to distribute public TV programs through apps on Roku boxes and Xbox Live.

The contracts, unveiled last week by PBS Digital chief Jason Seiken, lay the groundwork for apps that will feature local station programming and a limited selection of national content. OTT boxes are devices that stream content from the Internet directly onto television screens. For both the Roku and Xbox apps, users will select a local station, and the graphic interfaces will be cobranded with PBS and local station logos.

“We want to provide content to the widest audience possible but make sure local station branding is there,” Seiken said. “So if they turn on the Xbox to watch Nova, they’ll see it’s being provided by a local station. Hopefully, that will help create a relationship with the station.”

Unlike content deals with subscription-based services such as Netflix, Hulu or Amazon Prime that generate licensing revenues for PBS, the Xbox and Roku apps will be free to users of either platform. Local stations will benefit because their original content will become available to more viewers via the new platforms, hopefully building their viewership and financial support.

“I think this does a great job of making it clear that the local station is the entity the viewer needs to connect with,” said Jim Pagliarini, president of Twin Cities Public Television. “This will underscore that integration of content and branding.”

“We feel it’s critically important to be in this space — to be where the audience is,” Seiken says. Pictured during the 2012 PBS Annual Meeting. (Photo: Martin Allred)

In a first for PBS, users will be required to register for each service using their email address and to designate their local station. PBS will share the email addresses with stations through its Prosper online-fundraising initiative.

“Since this is content that will be played directly on the television, we thought it was a good place to start,” Seiken said. “We’re being more restrictive because viewing on these platforms is on the television — PBS’s whole economy revolves around TV, so we want to take cautious steps.”

Both deals will draw from the local station videos that also appear on COVE, PBS’s local-national video platform. The selection of national programs will be offered for a shorter window of time than on COVE.

“I think this is a marvelous step and I applaud it — it’s next-generation thinking about content delivery,” said Michael Dunn, g.m. of KUED in Salt Lake City. “If anything, in the industry, there’s some natural skepticism about non-traditional distribution, but we need to embrace this.”

By providing access to its content to set-top box users, public TV expands its potential to reach Xbox video-game console users and TV viewers who might have cut the cord with traditional cable companies, audiences that are difficult to reach via traditional broadcast and fundraising methods.

“We’re still interested obviously in station branding, but we want to be a part of the content conversation as well,” Dunn said. “Here we have this content that’s interesting and exciting, and we can have these new avenues to audiences that might not be expecting to find what they will find from us.”

PBS has been monitoring the adoption of OTT players and Internet-connected television for more than a year, according to Seiken. He described charts tracking growth among U.S. television households as “like a hockey stick,” with a sharp upward trajectory.

“We feel it’s critically important to be in this space — to be where the audience is,” Seiken said.

Roku reported sales of close to 5 million OTT players in the U.S. to date. According to a September 2012 study by market-research company The NPD Group, 45 percent of consumers watch paid and free video streams primarily on their television. This was up from 33 percent in 2011. PBS viewers have an even higher adoption rate, with a 2013 study showing 64 percent of PBS viewers had, and had used, an Internet-enabled device to watch television.

Stations have also realized that with the growth of OTT players, it behooved them to get into the space.

“As decentralized as media has become, we have to be responsive and put our content where the audience wants it,” Pagliarini said. “And this deal does an excellent job of keeping the integrity of the individual station brands and keeping local stations at the forefront.”

Pagliarini said he did not expect much pushback from users for requiring registration. Consumers have become accustomed to registering for free services provided over the Internet.

“I’ve had a Roku box forever, and when I want to access free content I register for it, and I’m comfortable with it,” Pagliarini said. “The quid pro quo is access to free content for registering and choosing a station, which I don’t see as a huge barrier.”

The deal differs from existing content deals with Netflix, Hulu and Amazon Prime, which have extensive collections of PBS material. Under those deals, the content is streamed from the Netflix, Hulu or Amazon servers, and PBS earmarks its licensing revenues for national production funds.

Seiken compared the Roku and Xbox deals to video streams offered on PBS.org, where a smaller selection of videos is available for streaming from PBS’s own servers.

In addition to getting the content to more viewers, the hope is the OTT deals will boost local stations’ appeal to lawmakers and underwriters.

“The stations have said it’s important to distribute across multiple platforms,” Seiken said. “We want them to be able to say, ‘You can see the content here, here and here.’”

Additionally, Seiken said it could be a boon to stations since PBS research has shown people using mobile apps on Apple or Android devices are three times more likely to become supporters.

“So, the hypothesis is that Roku and Xbox users will follow suit and be additive,” Seiken said.

The Roku app is expected to launch in February or March, and Xbox will release its app by May.