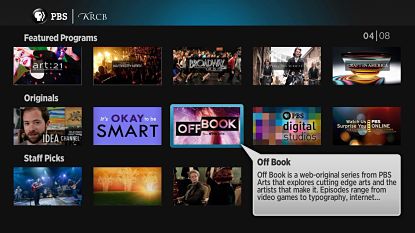 To watch PBS shows through the Roku app, viewers must complete a registration process that includes choosing their local station. The app’s interface then co-brands the programs with PBS and station logos. (Credit: PBS)

To watch PBS shows through the Roku app, viewers must complete a registration process that includes choosing their local station. The app’s interface then co-brands the programs with PBS and station logos. (Image: PBS)

As of May 8, owners of Roku Internet streaming TV set-top boxes gained access to the first-ever curated collection of PBS shows to be distributed for free on-demand viewings directly to television sets.

While PBS has already been offering on-demand access to its programs on mobile devices and computer screens via COVE, its local-national video platform, the Roku PBS app is different. Roku boxes are so-called “over the top” devices that stream Internet-based content. Neither cable cords nor roof-top antennas are needed.

In an April webinar with stations, PBS Digital chief Jason Seiken acknowledged that offering PBS content on a set-top box raises concerns about viewers bypassing stations, as well as additional competition for the programs on pubcasters’ local airwaves.

“This is almost us just putting a toe in the water,” Seiken said. “This one is right on our home turf — it’s on the television. So we decided to be very cautious about the amount of content we put out there and who can watch it.”

Roku also differs from subscription-based services such as Netflix, Hulu Plus and Amazon Prime, which offer PBS programs through licensing deals. PBS shows offered through the Roku app, and a forthcoming one for the Xbox, will be completely free to users of either platform. Viewers only have to register for the app to watch episodes of Frontline and American Experience, among other signature PBS series.

But the registration process includes two steps that lay the foundation for cultivating Roku users as donors. It requires users to provide an email address and identify their local station, which will be cobranded with PBS in graphics appearing throughout the app. To access PBS Kids programs, Roku users will have to register a second time and choose a station again. All of the email addresses collected through the registration processes will be funneled through Prosper, the PBS.org system for directing online donations to local stations.

To select their local station on Roku, viewers will follow the same process developed for PBS online and mobile apps: They key in a ZIP code, which generates a dropdown menu of local stations. The station listings will use the same algorithm as COVE, which is “basically matched to Nielsen ratings” — putting higher-rated stations first, Seiken told stations.

Because Roku’s set-top boxes lack a built-in web browser, the system won’t offer a “donate” button inviting viewers to contribute to their local stations. Instead, viewers will be directed to visit PBS.org/donate.

Initial program offerings on the app include signature primetime series such as Antiques Roadshow, Nova and Masterpiece, as well asweb-only programs from PBS Digital Studios.For primetime shows, only two programs from a series’ current season will be available, and the window for watching them will be limited to two weeks. Ten additional episodes from previous seasons add heft to the lineup.

Local station productions that are in the COVE system will also be available on the Roku apps. Viewers can access local productions of other stations by either using the search feature or changing their designated home station in the app settings.

Roku has been a leader in bringing on-demand television to consumers. In 2008, the California-based company became the first to offer Netflix’s streaming service. The company estimates it has sold more than 5 million set-top boxes to date. It offerings have grown to 750 entertainment channels.

According to a September 2012 market research study by the NPD Group, 45 percent of consumers watched paid and free video streams primarily on television, an increase from 33 percent in 2011. Among PBS viewers, adoption rates are even higher: A 2013 study showed 64 percent of PBS viewers owned, and had used, an Internet-enabled device to watch television.

Adoption of Internet-based TV viewing has become so widespread that Nielsen intends to revise its ratings methodology. Last week the company announced that it will add viewers who watch video over the Internet to its sample audience figures in September.

“Roku’s audience is PBS’s audience of the future,” Seiken told the stations in April.

The Xbox app, which PBS announced earlier this year, is scheduled to roll out this summer. At present, PBS has no plans to create apps for other streaming platforms such as Apple TV or PlayStation 3.