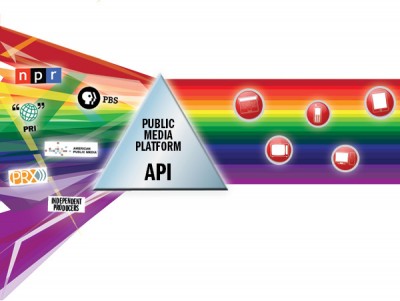 After producers upload their audio, video, photo or text content

After two-plus years of planning and prototyping a shared hub providing easy access to digital content from across public media, partners in the Public Media Platform will begin building the new technical system next month.

Representatives of pubcasting’s five major distributors — NPR, PBS, PRI, American Public Media and the Public Radio Exchange — formalized their joint commitment to creating a digital distribution platform in a Dec. 17 announcement. CPB provided an $8 million grant for the PMP’s build-out over the next 21 months and its startup through May 2017.

PBS Interactive Director Kristin Calhoun, who worked for the Public Radio Satellite System before joining PBS, has been appointed executive director of The Public Media Platform, Inc., the nonprofit that will build and operate the PMP. Calhoun, who starts her new job Jan. 7, will oversee the PMP from NPR headquarters in Washington, D.C.

“It’s rare that you get opportunities like this in public media,” Calhoun said of her new position. “I just got all jazzed up about it. For me, collaboration within the system and figuring out how digital platforms can present those opportunities is like a dream gig.”

All five PMP partners hold seats on the board of The Public Media Platform, Inc., and will oversee development and operation of the new system, slated for completion in mid-2014.

The board will appoint four at-large members in the coming weeks.

The platform will serve as a collaborative content-sharing space for public media content producers, including independents, distributors and stations. Web producers across the system — and in the public-media–minded web-programming community — will gain convenient access to a wide slate of public media programming, from major national shows to one-off documentaries and feature segments, for easier digital integration of content.

The foundation of the PMP will be built on the technical innovation that has powered public radio’s expansion as a producer of standardized online content for the past several years — NPR’s application programming interface (API), which launched in 2008. The API will provide a common programming language for the PMP’s many intended users while offering flexibility for producers and programmers to create custom interfaces.

There will be no charge to use the PMP, at least not immediately. “It’s particularly hard to get people to sign up for a fee for something that they don’t fully understand or necessarily see the value in on day one,” said Kinsey Wilson, NPR’s chief content officer and PMP board v.p. The business model calls for a mix of revenue sources to be developed as the system rolls out. These sources could include fees for service, philanthropic support, underwriting and licensing opportunities outside of pubmedia.

CPB’s $8 million PMP grant will be divided among the partners for three purposes:

A fallback provision in the PMP’s bylaws assigns responsibility for maintaining the platform to NPR in the event that the PMP proves unsustainable and is disbanded after its first three years of operation, according to Wilson.

“There needs to be a kind of fallback,” he said. “For whatever reason, if the PMP is not able to survive as an organization beyond the initial CPB funding, you don’t want it to simply go away and wind up with a stranded asset.” Wilson added, “If it wasn’t there, we would get some of the major players hedging their bets and building their own technology for fear that this might not survive.”

The new grant is CPB’s second investment in the PMP. It awarded an $800,000 grant to NPR in 2010 to collaborate with public media’s major distributors on building a prototype and developing a three-year business plan.

Though online content from public media’s major distributors is accessible to stations and web users at large through avenues such as web links, embedded streaming players and social media, the task of sifting through it is cumbersome and time-consuming. With a centralized database providing easy access to all manner of video, audio, text and photos from across the public media spectrum, PMP users will be able to find specialized content much more easily, Wilson said.

After producers upload their audio, video, photo or text content into the PMP it becomes part of an easily searchable database that uses a common programming language. Stations and other PMP users curate these media using tools provided by NPR Digital Services or PBS’s COVE/Merlin for display on their own web-based platforms, allowing them to present a broader variety of content to audiences through numerous devices. (Illustration: Matt Danielson)

“The value really is in figuring out what audience you’re serving and providing the most relevant content to that audience,” Wilson said. A station that’s producing a niche website on the auto industry won’t want to embed an entire episode of Marketplace if most of the content deals with unrelated subjects, for example. But the show’s news segment reporting on consumer adoption of electric cars could be a key feature of a digital presentation.

The PMP’s architects describe the platform as a digital version of the PRSS, which has a separate governance structure from NPR and is managed on behalf of all public radio distributors, producers, broadcasters and other constituencies.

Public radio tried to establish a similar framework to the PMP in 2007 through the Digital Distribution Consortium, a task force of pubradio execs who attempted to negotiate a set of shared standards for storing and cataloguing radio content and feeding it to websites and mobile devices. The project was ultimately shelved.

“There were too many different entities involved that didn’t have the incentives to make that work,” explained Cory Zanin, PRI c.o.o. and PMP board secretary, of the DDC. Shapiro, who was a member of the working group, said the DDC failed to reach a consensus on the need to create “a separate entity that gives it both an identity and a neutral ground.”

Zanin sought to distance the PMP from the DDC. “It’s important that we separate the two,” said Zanin. “There is total alignment in all five organizations [for the PMP] . . . We’ve tightened the whole impetus for this effort around the technology infrastructure.”

Shapiro does see conceptual parallels. “The instinct around the DDC was the same [as for the PMP], which is, ‘Public media really needs to have a collaborative and shared distribution strategy,’” he said.

One key feature of the PMP system will give producers the ability to manage intellectual rights to their work, according to Wilson. In uploading their media to the PMP, producers can set standards for how the content can be used. The feature will facilitate uses of public media content by distributors outside of the system, according to Zanin; for example, airlines may want to present public media content to their passengers, he said.

8 thoughts on “Full speed ahead for Public Media Platform”