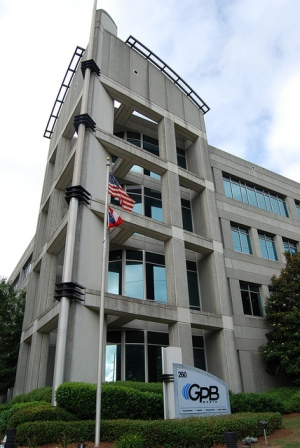 The multimedia production was a special project of Ryan’s, and the Republican governor believed that the lawmaker’s background in broadcasting and state government qualified him for the position.

Georgia Public Broadcasting headquarters in Atlanta. GPB President Teya Ryan recently agreed to hire a former state legislator to an executive-level position at the suggestion of the governor. (Photo: GPB)

That was what Gov. Deal told WABE, a community-licensed pubcasting station in Atlanta that is unaffiliated with GPB. In a Dec. 6 interview with the station, the governor said he wants the state government to “use Georgia Public Broadcasting as an economic development tool to a greater extent than we’re currently doing.”

In reaction to Gov. Deal’s WABE interview, former NPR President Vivian Schiller tweeted: “Never good when an elected official refers to a public broadcasting outfit as a ‘tool’ . . . for anything.”

GPB’s Dec. 5 announcement of Rogers’ appointment immediately drew media scrutiny as a politically expedient decision to remove the five-term legislator whose rapid ascent in the Georgia General Assembly had recently been punctured by a series of mishaps, including a failed bid to strip the lieutenant governor of his power in the state Senate.

The former senator, once described by the Atlanta Journal-Constitution as a “media savvy Tea Party favorite,” had been linked to a $2.3 million loan default on a failed hotel venture and a group of ultra-conservative activists promoting theories that President Obama uses mind control techniques to influence public opinion.

Ryan insists that Rogers will be an asset to GPB — and to the state’s economic development — in his role on GPB’s multiplatform project promoting employment opportunities. The initiative, which will now receive funding from the state government, is to launch next spring with a website, weekly radio program and social media, and eventually progress to television. The state government, which provided 44 percent of GPB’s budget in fiscal 2011, has agreed to back the project now that Rogers is on board.

“If I wasn’t comfortable with this, it wouldn’t be happening,” said Ryan, a former CNN executive, in an interview with Current. “I think before anybody in the [public broadcasting] system judges this, they should calm down and wait to see what we do.”

When Rogers announced his decision to resign from the General Assembly and accept the executive-level GPB post, he described his new job as “like a dream come true in many respects. The incredible team put together by Director Ryan is among the best in broadcasting. I really look forward to joining their efforts.” Rogers, whose compensation has not been disclosed, begins work at GPB on Jan. 15. 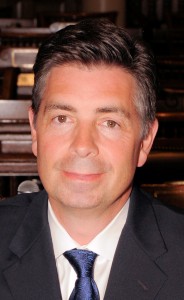 In an interview with Current, Rogers downplayed any connection between his recent political troubles and the governor’s role in helping him start a new career in public broadcasting. “The governor and I have a great relationship. He’s been amazingly supportive, even on the rare occasions when we don’t agree on an issue,” Rogers said. “This was just an opportunity he thought I’d fit well.”

Before he entered public service, Rogers had held many on-air jobs in broadcasting. He owned a small AM radio station, WYXC, in Cartersville, Ga., where he’d also worked as a reporter and as an anchor at WBHF-AM. Rogers co-hosted a syndicated sports show, Inside the Fence, on some 15 television stations throughout the Southeast. And recently he’s been a regular guest host for The Martha Zoller Show, a conservative talk radio show airing on about a dozen Georgia stations.

He also hosts his own Dish Network show, AAHOA Educational Experience, produced by the Asian American Hotel Owners Association. Rogers described the program as “a small-business interview show focused on the hospitality industry.”

When Rogers was first elected to the Georgia House in 2002, he was a rising star among state Republicans — bright and ambitious. He quickly moved on to the Senate for his second term in the General Assembly; by 2009 he was unanimously chosen majority leader. On the national stage, he served as treasurer for the American Legislative Exchange Council, an organization providing templates for conservative legislation that has been investigated by major news organizations, including NPR, for its lack of transparency and ties to corporate interests.

But shortly after his rise to leadership, Rogers began collecting political baggage. In 2010, he and a business partner were hit with the loan default lawsuit. Later that year, he teamed up with another senator to demand that the lieutenant governor be stripped of much of his power over the Senate chamber. The power play backfired, resulting in, as the AJC reported, “something close to chaos,” with no one in charge.

Scrutiny intensified on Rogers. A website devoted to legislative accountability in the Peach State, Atlanta Unfiltered, revealed that Rogers’ broadcasting career had included a gig as a sports handicapper under the name “Will ‘The Winner’ Rogers” on Proline, a program that aired on USA Network in the 1990s. Rogers told the reporter that he “did not pick games, I was given a script.”

And in October, local press reported that Rogers reserved a meeting room in the capitol for a group of ultra-conservative activists whose meeting was filmed by the electoral watchdog group Better Georgia. During the meeting, participants were told that President Obama uses mind control to force Americans to accept a dictatorship headed by the United Nations.

“In more than a decade in public life, I’ve never seen a more ridiculous issue,” Rogers told Current of the controversy over his role in the activists’ meeting. “These were constituents who simply requested a room. I was not an active part of the meeting. They came to me because I was the majority leader and I could get rooms.” Rogers said he has helped many groups, including the Boy Scouts, secure meeting rooms.

On Nov. 18 Rogers announced he would not seek reelection as the majority leader, saying he wanted to spend more time with his family.

“I have to be responsive”

In considering Rogers’ new role, Ryan isn’t concerned about the circumstances that brought him to GPB. “I’m going to judge Chip on how he behaves going forward in my company,” she said. “The past is the past. I’d like people to wait and see what the work is, and judge him from that.” 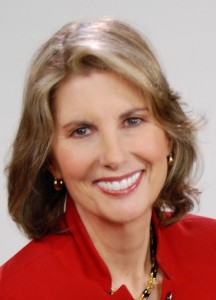 Despite Gov. Deal’s role in the hiring, Ryan asserts that GPB operates with editorial integrity and independence from government influence.

“We get state funding and I have to be responsive, and we balance all that,” she said. “But I feel very independent. Maybe even more independent than a lot of g.m.’s with university licenses. They should be very careful about pointing fingers just because we’re a state network.”

Ryan makes a key distinction about the economic development programming that Rogers will be involved in: The production will not be part of the newsroom. “This show will have nothing to do with the GPB newsroom at all,” Ryan said. “There is a firewall there. The newsroom here is a protected entity, just like in any public broadcasting station.”

“Trust is our most important asset,” Krichels said. “All public television and radio licensees, whether state, school or community, face the ongoing challenge of keeping their governing bodies fully aware and supportive of the critical importance of editorial integrity in production and programming decisions. It is the foundation of a healthy public media system.”

Pubcasters have had to guard their editorial integrity and independence from outside influence since the late 1960s, and for local stations — especially those that rely on state or university subsidies — it’s often a difficult line to walk.

Concern about the ethical quandaries of local stations prompted the Southern Educational Communications Network, a forerunner of the National Educational Telecommunications Association, to organize the 1984 Wingspread Conference. It produced “Editorial Integrity in Public Broadcasting,” a statement that guided ethical decision-making of local pubcasters. Those guidelines called for a clear distinction between the roles of a pubcasting station’s governing board or commission and its professional management.

The recent review and update of those ethical standards, released for voluntary adoption by local stations last year, called for transparency in decision-making, financial records and ethical conflicts of interest, but it did not address specific situations such as outside influence in hiring decisions.

Gov. Deal’s role in securing a job for Rogers is unusual, but it’s not unprecedented, especially not in Georgia.

Werner Rogers, GPB’s executive director in the late 1990s, was ousted from his job after the state auditor’s office reported discrepancies in GPB’s financing. The state-owned network, which operates nine television and 17 radio stations across Georgia, had recently moved into a brand-new $45 million building and was carrying a $7 million accumulated deficit. Democratic Gov. Roy Barnes dismissed Rogers and the appointees on GPB’s governing commission, and put State Auditor Claude Vickers in charge.

Former Gov. Sonny Perdue, a Republican, brought Ryan to the commission’s attention and pushed her selection as GPB executive director in 2009. When she arrived from CNN, she was one of only five GPB directors in more than a decade to have been appointed from outside state government. Vickers’ successor, for example, had been his deputy in the state auditor’s office.

Ryan has sought funding for the employment initiative for two years, and had become frustrated that it hadn’t garnered support. “There were just no resources to pull it off,” she said. “I wanted to do a jobs show, plain and simple,” linking Georgia businesses searching for employees with job hunters statewide. 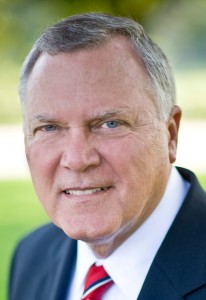 In his WABE interview, Gov. Deal said that Rogers’ GPB position is being funded “for the purposes of economic development.” Rogers “has a unique qualification in that he does understand state government,” Deal said. “He understands the importance of economic development to our state, and has a relationship here in the state capitol. All of that really ties together.”

Ryan also said she “absolutely” agrees with the governor’s vision of GPB as an economic development tool. She cited recent feedback from the popular local Friday-evening show Georgia Traveler after it profiled the Booth Western Art Museum.

“I got a call from the head of the museum,” Ryan said. “He said they had a 50 percent increase in visitors over that weekend, and a 52 percent rise in web traffic. That’s a commercial entity, and we put money in its pocket. We are an economic driver.”

GPB’s employment initiative has potential for other public broadcasters, Ryan said. “Watch what we’re doing,” she said of the upcoming jobs show. “I think everyone’s going to want to do it. Get beyond the personalities involved, where this all came from, and look forward. This will be a model program.”

One thought on “GPB hires governor’s pick for plum job”