WASHINGTON, D.C. — Chanting “Power to the puppets, we can save the Muppets,” hundreds of marchers rallied in front of the U.S. Capitol on the brisk, grey morning of Nov. 3 to protest threatened cuts to public broadcasting’s federal funding and to celebrate the power of their favorite public television shows.

Noisy supporters from as far away as California descended on Capitol Hill wearing, carrying, manipulating, pushing or pulling their favorite Sesame Street characters, as well as an array of other puppets. Organizers Michael Bellavia and Chris Mecham told Current that the size of the rally, which they estimated at around 1,000, surpassed their expectations.

Related marches were scheduled in several cities including Belfast, Ireland, Bellavia told the crowd. “Sesame Street has educated people all over the world, not just in America,” he said.

The event kicked off with a 10 a.m. gathering at Lincoln Park, a leafy square about a mile from the Capitol. Participants sang along to Sesame Street songs, shared memories of watching public television as children and good-naturedly groused about the chilly weather. 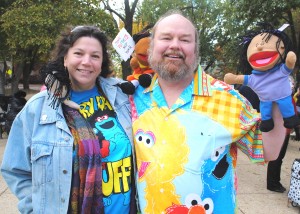 Mary Donohue and her husband, Sean Gorham, flew in from York, Maine. “We decided this was an important issue,” said Donohue, who is a psychologist who uses puppets to work with young trauma victims. “PBS is the best. It’s quality programming, telling great stories.”

Gorham sported a bright shirt covered in Sesame graphics that his sister-in-law sewed especially for him to wear to the event. Gorham said he finds it “shocking” that Republican presidential candidate Mitt Romney has stated repeatedly that he would defund public broadcasting if elected. That statement during the Oct. 3 presidential debate prompted Mecham and Bellavia to separately come up with the idea for the march. The two then combined their efforts, which originated online.

Wearing an aluminum-foil trash can and holding a sign that read “ONLY A GROUCH WOULD THROW AWAY PBS,” early childhood educator Marisa Alderdice of Sterling, Va., said she wanted to demonstrate her support for the educational value of public TV, and she’s concerned that public broadcasting funds “are on the chopping block.”

Nearby, a massive head dangling long arms and huge hands sprung to life, wearing a peace sign with the phrase EDUCATE TO EMPOWER on its back as participants lined up for the march to the Capitol grounds.

Along the mile-long route, chants arose: “What do we want? PBS! When do we want it? Now!” “Whose street? Sesame Street!” “Muppets united will never be defeated!” There were spontaneous choruses of various Sesame songs, as well as a raucous recitation of the alphabet. 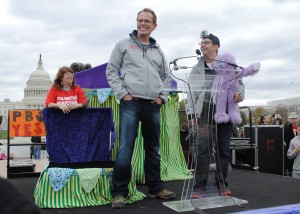 Organizers Chris Mecham, left, and Michael Bellavia address the crowd before the capitol.

Arriving at the Reflecting Pool between the Capitol and the National Mall, Bellavia took to a small stage to welcome the marchers, which included children in strollers, adults, seniors, dogs and many puppets. “It’s a love fest!” he cried above the cheers. “Stay warm by nuzzling with a puppet.”

Beale Street Puppets from Baltimore performed, and then children in the crowd were invited to the microphone to share their favorite Sesame Street characters. “I’m Marisa, and my favorite is Animal, and my mom is addicted to Masterpiece Theater,” said one; “I’m Amelia, I loved Elmo at 2 years old and I love him at 10!” reported another. A Georgetown University student spoke of his parents learning English on PBS.

Craig Aaron, president of media-reform advocate Free Press, used the opportunity to remind everyone that “thousands of local stations would not be on the air without this funding.”

In the crowd, Peter Olson of Oakland, Calif., and his friend Cathy Anderton of Washington, D.C., were operating multiple puppets. The two were “old housemates from our Central American activism days in D.C. years ago,” Olson said. He’s now a full-time puppeteer after quitting his job as a movement-dance therapist at a psychiatric hospital.

“It is unbelievable to me that Romney would increase military spending while cutting public broadcasting,” Olson said. “There is a direct correlation between quality educational television and kids getting a positive foothold in life.”

One thought on “Crowd rallies to save pubcasting funding”