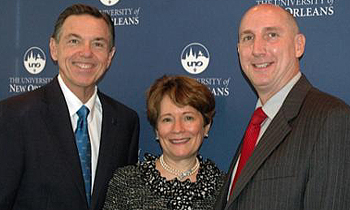 As New Orleans girds for the downsizing of its beloved Times-Picayune, and the resulting loss of local enterprise news reporting, a group of public radio partners is preparing to launch a new local journalism nonprofit that will employ upwards of 20 people in a hybrid digital/broadcast newsroom.

WWNO, the Crescent City’s NPR station, hatched the online news strategy in partnership with NPR and the University of New Orleans, its licensee. The newsroom will produce in-depth stories for both WWNO and a new website, NewOrleansReporter.org.

When WWNO announced its plan July 27, it was covered in the Wall Street Journal and on the Times-Picayune’s website as rolling out full steam ahead, with as much as $2 million in annual funding from donations and underwriting income. But WWNO General Manager Paul Maassen told Current the initiative is merely an “announcement of intent.”

The partners have raised just a third of the money needed for the project’s first three years. Maassen expressed confidence that WWNO will be able to raise the rest of the money, however.

Maassen wants to hire 10 employees to start with, including a newsroom editor who will report to him. WWNO will search for journalists both inside and outside of New Orleans. He expects to launch the operation by year’s end.

Though it has yet to raise the full amount it’s seeking for its online news operation, WWNO has already upped its commitment to local news. It switched its weekday programming July 23 from a mixed music and news format to all-news, and moved its classical and jazz programs to an HD channel. WWNO made the format change with just two full-time journalists on staff, each of whom anchor local broadcasts of NPR’s newsmags.

Those involved in planning the news website said they don’t intend to compete with the daily Times-Picayune, which is laying off one-third of its 600-person staff and in October scaling back print production to three days a week.

“The Picayune is still a big news organization,” Maassen said. “They’re obviously much better-funded than we are.” The online newsroom can’t replicate the same breadth of coverage, so its journalists will focus primarily on in-depth reporting.

“They want to focus on those areas that may not get the full attention of the newspaper,” said Kinsey Wilson, NPR’s chief content officer and digital strategist. “They’re going to have to be very selective in what they choose to cover.”

The news startup wasn’t planned as a direct response to the T-P’s downsizing. Plans for the NewOrleansReporter.org came together at the end of a three-year research project examining how WWNO could better serve its community. Participants in the project recommended that the station expand its digital presence, Maassen said.

NPR joined the partnership primarily as a provider of training and resources for staffers who may lack broadcast or digital experience. It will draw on a $1.5 million Knight Foundation grant awarded in December 2011 to support digital training at up to 70 member stations. But NPR will also help WWNO raise funds.

“Unlike almost any other community in the country, there’s an opportunity to find both national as well as local support for an undertaking like this,” Wilson said. News events in New Orleans are often of interest to the whole country, he said.

WWNO and NPR are establishing the news service in a city whose residents have relatively scant access to broadband Internet connections.

A March investigation by local journalism nonprofit The Lens (which is also a WWNO content partner) found that wide swaths of the city, especially lower-income communities such as the Katrina-devastated Lower Ninth Ward, lack broadband access at a larger rate than typically found in similar-sized metropolitan areas. And the Investigative Reporting Workshop at American University recently found that the state of Louisiana is ranked 44th in the nation in terms of broadband subscription.

The lack of broadband access contributed to a backlash among New Orleans residents over the Times-Picayune’s decision to shift operations online.

Wilson is confident WWNO’s initiative will serve the community well thanks to “the combination of radio and easy accessibility on mobile devices, which are quite common even in places where there’s lower broadband connectivity.”

“Radio is precisely the kind of media that is accessible in underserved communities and communities that don’t have the kind of broadband penetration that you see in larger urban areas,” he said.

The Times-Picayune‘s downsizing plans first came to light in June, and Advance Publications continues to roll ahead with the plan despite vocal opposition from local activist groups, politicians and community leaders.

NPR will be helping to fund the WWNO/NewOrleansReporter.org initiative through a $1.5 million Knight Foundation grant intended to be distributed to member stations for website-related projects.

In March, New Orleans nonprofit reporting outlet The Lens published a comprehensive examination of broadband subscription rates across the city and found that the poorest communities still suffer from inadequate Internet access.