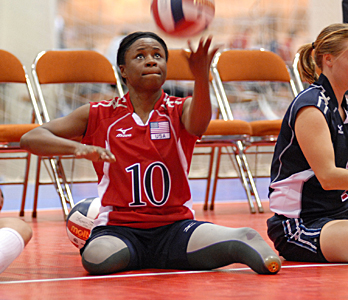 Kari Miller, a star of the U.S. Women’s Sitting Volleyball team and Medal Quest blogger, gears up for a serve. Miller lost both her legs in a car accident. Photo courtesy of WGBH.

As Olympic fever sweeps our already sports-crazed nation, an online-only documentary project from WGBH is channeling the Olympic spirit toward a major sporting event that receives scant media coverage yet is of great interest to underserved audiences.

A 10-person team from Medal Quest, a multimedia project following the lives of American athletes competing in the 2012 Paralympic Games in London, will begin producing video reports live from the games on PBS.org in late August. The website debuted on PBS.org in February of this year, and will produce coverage through October.

Behind Medal Quest is veteran WBGH Executive Producer Judith Vecchione, of Eyes on the Prize and Vietnam: A Television History, among other long-form documentary projects.

“The documentary broadcast audience doesn’t reach a lot of sports people, and that’s not an audience public broadcasting has been looking for,” Vecchione said in an interview. “We saw extensive web and digital content as a way to bring in young male viewers and sports fans for this project.”

In terms of the number of athletes competing, the Paralympic Games are the second-largest international athletic competition in the world. Over 3,900 athletes from 146 countries competed in the 2008 Beijing Paralympics, and more are expected this year.

In the Paralympics, athletes with physical or intellectual impairments in six categories participate in sporting events that are structured to ensure fair competition among athletes of similar abilities. The Paralympics began after World War II as an athletic competition among injured veterans, and it strives for equal treatment with non-disabled athletes in the Olympics.

Though the series won’t be airing on public TV stations, it received a $400,000 grant from CPB’s Diversity and Innovation Fund in late 2011, locked up a corporate sponsorship from oil giant BP in June 2012 and recently secured a gift from the Gordon & Llura Gund Foundation.

Some 42 athletes have participated in Medal Quest, whether in “featured athlete” documentaries or as bloggers, according to Vecchione. Of these, 33 qualified for the Games, some as members of teams and many in more than one event.

Vecchione describes the Medal Quest production team as a “bare-bones staff” that is spread out over the country – with executives, legal and photo departments in Boston, video production based in Los Angeles and social media in Texas. A core 10-person team of producers, directors, camera people and editors will make the trip to London to capture the Paralympic action.

Medal Quest has been publishing new content on its site every day since February, with roughly 30 short documentaries and well over 100 blog posts produced at time of publication. During the games, the Medal Quest team will have full access to film in the Olympic Village and at events, and, as Vecchione put it, will “have a chance to complete our stories.”

One of those stories is that of Elexis “Lex” Gillette, a visually impaired Paralympic sprinter and long jumper. Medal Quest has followed Lex as he trained for the Paralympics and qualified to compete in the Paralympic Games. He hopes to nab a gold medal later this month, and is also a blogger for the Medal Quest project

In a short Medal Quest documentary posted in late May, Lex describes the chronic retinal detachment problem that lead to his impairment, the process of learning and training to run and jump while blind, and his devotion to his sport.

“I put everything out there to compete at the highest level and bring back gold medals for the USA, the country that I love,” said Gillette in an interview. “The Medal Quest project is helping tremendously to promote the Paralympic movement, and I think that is extraordinary.”

Television production had been planned for Medal Quest but couldn’t be funded. Vecchionne, a producer whose documentaries have been featured on PBS primetime for decades, describes the web-only production model as a step forward. “Nailing down the 8 p.m. slot on Monday isn’t what you should do anymore as a public TV producer,” she said. “Iconic series around the public broadcasting system are aware of this, and more flexibility is needed in terms of evolving online. We can do it, and we are doing it with Medal Quest.”

“Going completely digital is a challenge, but it’s a challenge that’s worthwhile,” said Dave Peth, senior producer at WGBH, who is managing the digital element of the project. “These are amazing personal stories — I’m drawn to them, and I want to help share that with an audience that’s larger and more diverse than one that would watch a PBS broadcast.”

Medal Quest is targeting its content towards the disability community and the families, veterans and sports fans who make up the Paralympic fan base, according to Peth. The online audience skews much younger than the norm for PBS broadcast programs, which he considers encouraging.

“In my opinion, what public media have always done well is that we’ve always told stories honestly, and told stories that matter. There is a voracious appetite for more diversity of voices and topics online. We are ideally suited to find stories and give them to people who care about them online,” said Peth.

At time of publication, Medal Quest had over 3,200 “likes” on Facebook.

“I don’t see working exclusively online as a step down; I see it as a step in a different direction, and a step forward. This is the future,” said Peth.