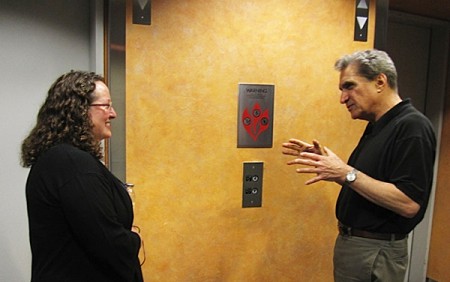 Pinsky (right) talks with NPR producer Ellen Silva, who has the delicate task of fact-checking the newspoets' work.. “All we have is our credibility,” she said. “But we also want to be creative.” (Photo: Mike Janssen.)

Pinsky (right) talks with NPR producer Ellen Silva, who has the delicate task of fact-checking the newspoets’ work. “All we have is our credibility,” she said. “But we also want to be creative.” (Photos: Mike Janssen.)

NPR’s All Things Considered now comes with a monthly dose of poetry, courtesy of poets who embed themselves among the network’s journalists and take hours to write a poem based on the experience.

In June, the month’s news poet, Robert Pinsky, found himself sitting in on editorial meetings at NPR’s headquarters. Gray-haired and wearing a black polo shirt, he absorbed the flow of conversation as hosts, editors and producers hashed over the day’s events, deciding what was newsworthy.

Executive Producer Christopher Turpin introduced Pinsky by joking that his appearance at NPR would be “the most thrilling poetry exercise since Wilfred Owen was in the trenches of France.” The company of journalists is not unfamiliar to Pinsky — he regularly appeared on PBS’s NewsHour for seven years and shared poems by other poets that related to the day’s news.

NPR launched the monthly NewsPoet segment “to make poetry relevant to listeners’ lives and to inject emotion and joy” into All Things Considered, said Ellen Silva, NPR’s supervising editor for ideas, books and opinion. Each news poet sits for an interview with an ATC host, then reads his or her poem to wrap up the show. [Project website.]

Poets are picked with an eye toward diversity in age, ethnicity and experience. Some are up-and-comers, while others such as Pinsky, a former U.S. poet laureate, are well-established in the poetry world. Others who have appeared include Paisley Rekdal, Kevin Young and Tracy K. Smith.

The ATC gathering was Pinsky’s third meeting of the morning — he’d already sat in with teams for Morning Edition and digital news. As he listened, he didn’t always pay attention to the actual content of the discussions. “The way people talk to one another tends to distract me,” he said.

“Just as it distracts us from actually doing anything useful in the meeting,” Turpin said.

Later, Pinsky said he likes getting to know the jargon and characteristics that distinguish professionals working in specialized fields. “I’m interested in how people earn money and what they learn to do to earn it,” he says. “Their metiérs and all the psychological muscles and calluses that they have are interesting.”

As a writer of poetry, Pinsky does not approach his subjects directly but sneaks up on them, surrounding the main theme with digressions and parallels on topics throughout history. He is guided by sound as much as meaning, relying mainly on his inner ear.

“I’m not a topical writer in the straight-ahead way,” he said. “I don’t write directly about things that happen in my own life, or about anything. I write crookedly.”

At NPR, he brought his approach to bear on a slow news day. The June 14 edition of ATC had ample space to fill. Everyone at the meeting threw out topics for consideration: developments in Egypt, baseball, Syria, the presidential race.

Pinsky watched attentively but took no notes — he’s been a poor note-taker since his school days, he later confessed. He spoke only when the assembled journalists couldn’t remember the name of the next update to Apple’s desktop operating system.

After the ATC meeting and a visit to NPR’s newscast unit, Pinsky had to get down to business. Like the journalists, he was on a deadline. Silva stationed him in a room with a nondescript door in a dim corridor to complete his assignment. Much of the day’s ATC broadcast had already been readied. A producer gave Pinsky scripts and rundowns to review.

Silva and Pinsky examine the rundown of ATC’s stories.

Pinsky condensed his gleanings into a terse, four-stanza, 16-line poem titled “From the River of News.” It ran through a summary of the day’s events largely without comment, though Pinsky did find resonances among the otherwise unrelated news developments. “Speeches and statements. Tongues. Poems, reports, parleys,” he wrote.

He presented the finished product to Silva, who had to fact-check it.

“Fact-checking?” Pinsky asked. “This is poetry.”

“I know,” Silva said. “I have to fact-check the quotes that you used, though.”

One line in particular posed a problem: Pinsky incorporated a quote from a New York Times article into his poem but changed the wording. He and Silva fixed the problem by simply removing the quotation marks.

How about italics? Pinsky asked. Silva said no.

“Far out,” Pinsky said. “The whole deal is off. I’m going back to Cambridge,” he kidded.

“All we have is our credibility,” Silva said, and NPR’s keen-eared listeners are quick to catch mistakes. “But we also want to be creative.”

With the fully vetted poem ready for broadcast, Pinsky entered a booth and sat across from ATC host Audie Cornish to record his interview [audio].

After reading his poem and leaving the studio, he returned to his makeshift office to make an urgent phone call. He dialed up Apple to order the newest MacBook Pro model, just released.