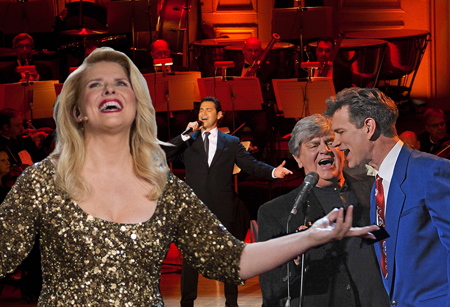 The question came up during a PBS Research presentation at last month’s Public Media Development and Marketing conference in Seattle. Research Director Bill Merkel presented slides displaying the most-watched pledge shows and the exodus of loyal viewers during the pledge period. A station rep pressed him on the tenuous link between program ratings and viewer contributions.

“I understand that ratings don’t translate into dollars,” Merkel said. The PBS research team is working with Nielsen to analyze national ratings data alongside PBS’s data about pubTV membership. The combined data would allow researchers to track which programs members watch.

The ratings data available now show that performance programs continue to do the best job of bringing viewers to public TV during pledge drives, Merkel said. His presentation in Seattle featured ratings from pubTV stations’ March and June drives.

Big Band Vocalists, a special from producer T. J. Lubinsky that highlights popular music of the 1940s, topped the ratings chart for March pledge with a 1.1 household Nielsen rating. The median age of its audience, 74, was also impressive. “I think that’s the highest I’ve ever seen,” Merkel said at PMDMC.

Pledge viewers on average aren’t getting any younger, but at least since 2010 they’re not getting too much older either, Merkel said. The median age of viewers who tune to pubTV during on-air fundraisers has hovered around 62 for the past three years.

TRAC Media Services analyst Craig Reed described the aging of the pledge audience as a decade-long shift. Yet it doesn’t alarm him, as he sees a lot of variations in the demographics of viewers watching pledge shows.

Reed is most concerned about the long-term viability of public TV pledge drives and the 40 percent growth in on-air minutes devoted to pledge appeals since 2007.

“The pledge model is broken in that way,” Reed said. “It is far easier to add pledge minutes than it is to significantly reduce expenses. Until a major new source of revenue is tapped, there will continue to be too much pledge on the air.”

Stations should be adopting these tactics for most of their pledge shows, Reed said, yet “not all of them do, that’s for sure.”

Do ratings matter in pledging?

PBS audiences receded during pledge drives this season, according to the network’s analysis of Nielsen primetime ratings. (Graphic based on PBS chart.)

When it comes to scheduling pledge programs, managers at two stations told Current that ratings data don’t influence their decisions at all.

WSKG in Binghamton, N.Y., is in one of the nation’s more than 150 Nielsen diary markets, and it receives local ratings data the old-fashioned way: in books that Nielsen produces four times a year. The data, compiled in February, May, July and November, don’t correspond with WSKG’s on-air fundraising schedule.

“I don’t have any data, really, that reflects my pledge programming,” WSKG-TV program and traffic manager, Stacey Mosteller, told Current. “My Nielsen data is mainly for my core programming.”

Neither Brinson nor Mosteller named performance shows as their top pledge programs. WSKG’s recent hits have been locally produced documentaries, and, like KCTS, it has continued to pull in lots of donations with self-help personalities like Wayne Dyer and Suze Orman.

PBS’s Nielsen data is confirming what programmers and on-air fundraising specialists have long struggled against in planning their pitches: Viewers are wise to the pledge breaks and surf away to other channels until they end.

At PMDMC, Merkel presented a minute-by-minute analysis of viewer tune-ins during Great Performances’ “The Phantom of the Opera,” which aired during March pledge. The breakdown resembled that of a typical cable show: Viewership dips during the breaks, but climbs right back up when the station pitching ends. PBS’s most loyal contingent rejoins the program, having internalized the typical length of a pledge pitch.

These “loyal” viewers are significant to PBS. Its research team began tracking this subset of the audience, defined as the top 20 percent of all viewers in the total amount of PBS programming they watch, in 2011. Loyal viewers over 18 years old make up 83 percent of all PBS minutes watched, according to Merkel’s data.

But do even the most loyal viewers have a pledge limit? Time may tell.

5 thoughts on “If ratings don’t correlate to dollars at pledge time, what will?”