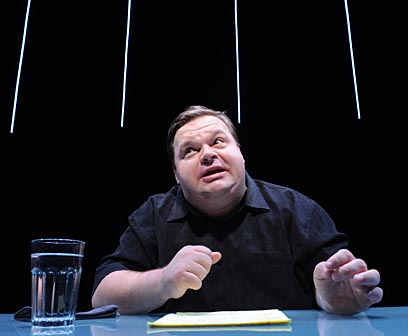 This story has been expanded from the print edition.

Toward the end of his revised monologue on the working conditions in Apple manufacturing plants in China, Mike Daisey delivered a peculiar pointed message to the audience of the Woolly Mammoth Theatre Company in Washington, D.C.

“None of this is news,” he said, referring to the stories he’d just told of hopeless, suicidal factory workers. As he often does on stage, Daisey had loaded the statement with pregnant pauses and emphatic hand gestures. “It never was. We knew it already.”

The original version of The Agony and the Ecstasy of Steve Jobs helped to raise public consciousness about labor conditions in factories run by China-based electronics manufacturer Foxconn. But the 2010 theatrical show also became a news flashpoint itself, one that hit both Daisey and producers of This American Life, who collaborated with the dramatist to adapt his monologue to their own style of personalized journalism in a show that aired in January. “Mr. Daisey and the Apple Factory,” as the now-retracted episode was titled, became one of the most popular episodes of TAL, with more than 880,000 downloads.

But Daisey’s story, as he acknowledged in a March follow-up broadcast, wasn’t journalism, and several of its most emotionally riveting moments were exposed as exaggerations or outright lies.

“It is not up to the standards of journalism, and that’s why it was completely wrong for me to have it on your show,” he told TAL host Ira Glass during the follow-up episode, which was titled “Retraction.” “And that’s something I deeply regret.”

Now Daisey has a revised version of Agony, and just completed a nearly three-week run at Woolly Mammoth, the theater that premiered the monologue as a three-hour “birth” performance in 2010. Woolly Mammoth does not disclose ticket sales information to the public, but opening night was well attended.

The old Agony was labeled as nonfiction. The new one isn’t, and much of the contested material that made its way onto This American Life is gone.

In the original production, Daisey said he met girls as young as 12 who worked in the Foxconn factory, and he regaled audiences with his account of a Foxconn worker who lovingly examined Daisey’s iPad with a hand so injured by machinery that it resembled a claw. The guards at the plant he visited carried guns; union workers met at Starbucks.

Daisey, who is known for varying his monologues from night to night, said during his reboot’s July 18 opening performance that he met young girls in the factory, but he did not give their ages. There was a worker with a deformed hand, but he no longer worked at Foxconn and did not caress Daisey’s iPad. The details about the guns and Starbucks were also absent.

These fanciful elements had undermined the credibility of Daisey’s original TAL broadcast with reporters based in China, prompting Marketplace reporter Rob Schmitz to reexamine the facts behind Daisey’s monologue. Schmitz located the translator who accompanied Daisey on his research trip to Shenzhen, a city in southern China where workers produce Apple products in a Foxconn plant. He learned that many more elements of Daisey’s monologue aired by TAL were exaggerated or fabricated.

In his revised monologue, Daisey barely acknowledges the fallout from the fabrications that came to light through Schmidt’s reporting and This American Life’s painful reexamination of its own vetting process, though he reminds his theater audience that he is a “noted fabulist.”

During an interview with Current, Daisey was careful not to label even this new version as “true.”

“There is no objective, journalistic version of the show,” he said. “I will be, always, making constant lies of omission by leaving out tons and tons and reams and reams of details.” But, he reasoned, journalists do this already.

Reviews of Daisey’s Agony rewrite have been mixed. The Washington Post said the show “sounds an alarm that now has a hollow ring.” But the New York Times praised the redo as “more powerful, funny and engaging than the earlier production.”

The audience on opening night, at least, didn’t seem to mind: It laughed heartily at Daisey’s jokes, even the bits repeated verbatim from his TAL appearance, and at his impression of Apple’s old dot-matrix printer. And when he concluded his show, with a declaration that everyone in the theater would leave with a fuller understanding of how their electronics are made, the response was sustained applause.

If the upside of Daisey’s two-year run with Agony is greater awareness of the working conditions for those who produce high-tech gadgets overseas — and the effects that exposure has had on Apple and other technology companies — there’s a big downside for Daisey. Lots of iPhone users now know about Foxconn plants in China, but they’re very likely to recognize Daisey as an actor whose attempt to blur the lines between journalism and theater violated the standards for representing truth in at least one of those mediums.

Amid the media scandal over the falsehoods presented in his TAL story, Daisey offered apologies and explanations aplenty, first in a talk at Georgetown University on March 19 and then in blog posts on his website.

“When I said onstage that I had personally experienced things I in fact did not, I failed to honor the contract I’d established with my audiences over many years and many shows,” he wrote in a post entitled “Some Thoughts after the Storm.” “In doing so, I not only violated their trust, I also made art that didn’t live up to what it should be.”

Daisey makes no excuses for misleading theater and public radio audiences about his visit to the Foxconn factory in Shenzhen. The story of his trip grew into a tall tale over time, Daisey told Current, through the increasing number of media interviews he gave, all of which led up to a personal invitation from Glass to adapt his monologue for public radio.

“Telling a story in an interview is not that different from telling it onstage, but it is more charged,” Daisey said. “Everything we say that is not onstage is on the record, so anything you said there becomes a fixed point that must never change.”

Woolly Mammoth, which has staged four of Daisey’s monologues over the past five years, stood resolutely by the performer after the scandal broke, and there was little talk of cancelling the planned summer run of Agony. In fact, the company hopes to push the monologue’s sphere of discussion firmly back in the direction of Apple, and arranged an Aug. 4 post-performance conversation between Daisey and Apple co-founder Steve Wozniak (whom Daisey recounts meeting in the new show, and depicts somewhat unflatteringly as a Mountain Dew–chugging “autistic bear”).

“The thing that we’ve apologized for is [initially] labeling the show a work of nonfiction. That’s something that I feel should have been more scrutinized,” Howard Shalwitz, artistic director of Woolly Mammoth, told Current.

Shalwitz draws a sharp distinction between Daisey’s role as a theater artist and those of journalists who have covered working conditions at the Foxconn factories.

“I think there’s a role in this kind of topic for theater, and I think there’s a much, much larger role for journalism, and I wouldn’t want to ever claim that theater was doing the job that we absolutely need journalism to do around a very, very important issue like this,” he added.

Others in the American theater community agreed that Daisey’s decision to present the monologue as nonfiction — and to present himself as an expert on electronics manufacturing in China — was his great mistake.

Polly Carl, director of the Center for Theater Commons at Emerson College and an editor of the online theater journal HowlRound, has helped to bring “docudrama” plays to the stage in the past. Most notably, she worked on Winter Miller’s In Darfur, which, like Agony, was based on the playwright’s visit to the region that provides the setting for the theatrical work.

Miller built In Darfur on mounds of facts, Carl said, but she also created composite characters and frequently took a storyteller’s license. The play was not advertised as nonfiction, and Carl said there was never any discussion of presenting it as such.

“There’s nowhere that said, ‘This is a true story,’” Carl told Current. “We never thought about it in any other way. And in a way the impact of it was no less.”

As the media started paying more attention to Agony, Daisey chose to adapt his role as a performer into that of an electronics labor crusader and media commentator, opening his work up to scrutiny under a different lens.

“Steve Jobs died and Mike Daisey basically writes the editorial in the New York Times. I mean, he becomes the expert,” Carl said.

Glass and the rest of the TAL staff declined to discuss the new version of Daisey’s production, but Marketplace’s Schmitz went public with his objections to the revival of the monologue.

In an interview with the tech blog Pando Daily, Schmitz questioned why theater audiences would still want to see Daisey perform his show: “Maybe they’re just interested in it for entertainment value, and that’s fine. But it’s a little disturbing because it crosses the line of information and entertainment. It’s infotainment,” Schmitz said in the July 24 post. He disputed the idea that Daisey cares about the well-being of the Chinese Foxconn employees: “He talked to workers and then lied about what they said to him. How much respect is he giving the Chinese by doing that?”

Daisey had worked in pubradio before TAL, having participated in several episodes of PRI’s Studio 360. Even now he says he would return to radio if asked. But the air’s a bit different now.

“They’ve heard a lot from me. They’ve probably heard a lot more from me than they care to,” Daisey said about the media community. He offered an invitation of sorts to anyone in public media looking for more: “If people want to reach out to me, if people feel like there’s something they want to hear, they know where to find me.”

Theater audiences, meanwhile, will hear more from Daisey. On July 29 at Woolly Mammoth, he workshopped a new monologue, entitled The Orient Express (Or, the Value of Failure), delving deeper into the fallout from the media scandal. He’s not yet done talking.

This story has been amended to correct the misspellings of Daisey’s name and dates of the performances pictured in the photo captions. In addition, his account of the worker with a damaged hand has been clarified. Also, during the show Daisey claimed he is a “noted fabulist,” not a “known fabulist,” as we reported originally. The link to his play has been updated below.

Before the controversy broke, Ira Glass spoke with Current in February about adapting Daisey’s performance for radio.

Then in March, Marketplace’s Rob Schmitz broke the news of Daisey’s fabrications, leading to the previously unheard-of step of a full TAL retraction.

Schmitz told Current later that month that simple research techniques, including rudimentary Googling, were what led to Daisey’s unraveling.

In the aftermath, not even David Sedaris’s humorous TAL tales were safe from the increased media scrutiny (May).

When news of Daisey’s fabrications came out in March, he responded on his blog. Daisey took to his blog again in July to answer the question of why he continues to perform Agony.

Rob Schmitz, in turn, expressed his own thoughts about the ongoing production to Pando Daily.

Writing in HowlRound, Polly Carl wrestled with the question of truth in theater. Woolly Mammoth, meanwhile, stood by their man.

The talk Daisey gave at Georgetown University soon after the scandal broke is still available for listening online.

Read The New York Times’ (positive) review of the relaunch – and the Washington Post’s (unconvinced) take.

And if you want to read the play itself, Daisey has posted the outline on his website.