Bolstered by ratings data on their digital multicast channels and years of experience in managing them, public TV station programmers in many markets are refining their channel lineups, looking for new ways to counter-program their primary channels and super-serve local audiences. 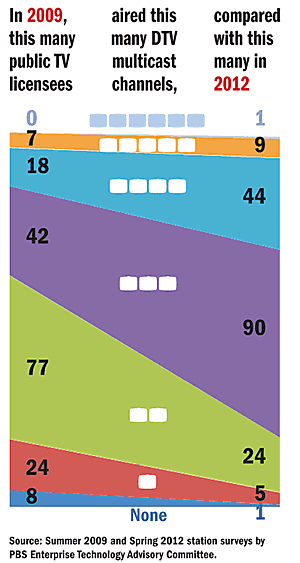 WETA in Washington, D.C., is the most high-profile example of this, angling to compete with the cable network BBC America for the viewership of Anglophiles, not policy wonks, in the nation’s capital. On June 4 it launched WETA UK on multicast channel 26.2, the first all-British broadcast channel in the U.S. Earlier this year WETA dropped Create, the lifestyle channel distributed by American Public Television, a move that programmers in other markets may be considering as well as they look for more flexibility in programming their multicast channels.

The changes are prompted by several new developments: the availability of Nielsen ratings for multicast signals in 25 markets, increased local capacity to customize these digital channels and enhancements that APT and its partners plan for Create as well as its World, the news and documentary channel that is adding new and exclusive programs as it moves from a free to fee-based service as of July 1.

APT, which got into the business of distributing multicast feeds six years ago as public TV prepared for the digital transition, now finds itself juggling the demands of stations that want to customize and monetize their local channels, and a looming imperative to develop revenue streams that will sustain the services. One complication has been the lack of ratings data that would support sales of national underwriting for Create.

Two years ago, only a few pubTV multicast channels had audiences that were large enough to be detected by Nielsen (Current, March 1, 2010), but now 25 stations receive ratings for their digital channels, according to Kristen Kuebler, director of station research at TRAC Media Services.

The digital numbers also explain the puzzling difference between PBS’s national ratings and what local stations see in their Nielsens (Current, June 21, 2010), a discrepancy that has created “a lot of tension” in the system, Kuebler said. Since 2009, when PBS began receiving national ratings data on a daily—not weekly—basis, national viewership data hasn’t lined up with the local ratings that stations received. The larger national results raised suspicions among local programmers about the validity of the data.

“Stations get frustrated because their ratings aren’t up. But PBS’s national data rolls in digital channels,” Kuebler said. “Now we can look at them and say, ‘Yes, with the digital data, ratings are up.’”

In Idaho, from HD to SD

Idaho Public TV is among the stations enjoying a big audience boost via digital multicasts. KAID Plus, a channel that launched as an HD feed in 2001 and was revamped last year, routinely attracts a 10 weekly cume, double the weekly cume average of pubTV digital channels overall.

KAID Plus launched as KAID HD, carrying same-day repeats of HD fare packaged and distributed by PBS. “We spent a lot of time riding the PBS satellite,” said Ron Pisaneschi, program director. Even so, because IPTV is in the Mountain time zone, the channel gave viewers more opportunities to watch their favorite shows. Fans of the PBS NewsHour, for example, could catch the national news show at 5 p.m. on the multicast channel, or at 6 p.m. on the main signal.

Last August, Pisaneschi revamped the channel lineup. Since PBS’s national feed had shifted to all-HD, Pisaneschi needed to differentiate the content of KAID’s primary channel from Plus, but he also aimed to create more flow between programs to increase time spent viewing and establish a place for higher-rated programs in standard definition.

WETA decided to ditch lifestyle programming for British fare after an extensive analysis of its multicast audience and local viewers’ appetite for programming from the U.K.

Veteran programmer Kevin Harris and his deputy Bryant Wilson discovered the cable network BBC America was underperforming in the market. In fact, Harris told Current, “nothing on BBC America in the D.C. area even came close to the audiences we get for Masterpiece, Doc Martin, Britcoms and our Thursday British mysteries night.” Harris sensed that an all-Brit multicast would be a big ratings winner but saw only one of WETA’s multicast channels as ripe for a revamp: the lifestyle channel WETA How-To, which he had begun programming locally in January after dropping APT’s Create.

He had the technical capacity and “people power” to program the channel in-house, and wanted more flexibility to fundraise on-air and insert local programs. “We have the wherewithal to come up with options, so it didn’t make sense to be locked into that kind of box,” he said.

Chicken and egg for sponsorship

WETA’s defection comes at key turning point for American Public Television, the leading provider of multicast channels to local stations. Producing stations WGBH in Boston and WNET in New York are its partners in packaging World and Create for public TV distribution.

President Cynthia Fenneman refuted Harris’s complaints about restrictions on local stations that distribute Create. The channel is programmed as two 12-hour blocks, and stations can insert two hours of local programming in each run, or four hours over a 24-hour broadcast day. Many local stations use this local window to present popular local fare, she said. In Chicago, WTTW’s viewers can catch the locally produced restaurant review show Check, Please! on the station’s Create channel.

APT has been working to develop new revenue streams for Create through both on-air fundraising and national underwriting.

A national pledge event featuring travel host Rick Steves, produced in March, raised some $40,000 for a station in a top 20 market, Fenneman said, and results from other markets are still coming in. Create’s programmers are developing a series of pledge roll-in spots featuring various program hosts. Pledge premium gifts and a widget for soliciting online donations for stations are in the works

APT is also pursuing plans to sell national underwriting for Create, but up to now it hasn’t had detailed audience numbers to present to potential sponsors It’s “kind of a chicken-and-egg thing,” Fenneman said. Nielsen’s price for national ratings data on Create approaches the “the cost of running the whole channel,” she said. APT is talking with Nielsen about its less-expensive research products that underwriters would still accept.

Underwriting has always been part of the ongoing business plan for the channel, which APT launched in 2006 as a partnership among public TV’s major producers and distributors. License fees range from $3,800 to $17,000, based on market size.

WGBH is preparing for a major enhancement for World, which was conceived at the same time as Create but has taken much longer to make a strong bid for wider carriage.

In July, stations will begin paying license fees to carry World. Costs range from $2,250 to $10,500, depending on market size, and supplement CPB’s support for the channel, according to Jamie Haines, APT spokesperson. World, which has been operating on CPB aid up to now, must build self-sustaining revenue streams by fiscal 2014. In addition to license fees, APT is seeking additional grants and major gifts to continue operating the channel.

To strengthen World’s program lineup, WGBH hired Liz Cheng as World general manager in December 2011. She has been pursuing deals for new and exclusive content, broadening the range of programs to be featured on the channel: a TV version of the popular pubradio Afropop Worldwide; a Sunday-evening anthology of documentaries by and about diverse communities, co-presented with the Independent Television Service, the minority consortia, and producers of POV; and a limited series of talks from the Aspen Institute are among the new offerings. Auditions are under way for a Siskel-and-Ebert–style show, with “smart, opinionated characters” talking about films on World, Cheng said. That show is slated to launch in August.

As with Create, stations may locally insert up to two hours per 12-hour block of World. “We encourage local programming, public affairs, debates — all that makes the channel stronger,” Cheng said. Local underwriting inserts are also permitted.

Although TRAC doesn’t have data on the number of locally scheduled multicast channels, Kuebler sees a move in this direction. “There were a few stations that programmed their own channels from the very beginning,” she said, “but more and more have started programming their own as they’ve gotten comfortable with the technology and effort required.”

That’s the outlook of programmers like Susie Hernandez at Arizona Public Media, and it has challenged APT to step up its station relations on behalf of Create and World.

“My personal feeling is, the packaged channels were great when stations went digital, because it was way too overwhelming to program more than one or two channels,” she said. “I’m a new programmer, so I’ve always had a lot of channels. That’s how I was trained.” She arrived in Tucson in 2008, after pubTV’s multicast channels had already launched.

Hernandez replaced Create with Ready TV last November, and now she’s negotiating with APT to keep World in her channel lineup. “This is a heavy public-affairs market,” she said. “We cannot air enough NewsHour, BBC News and our own local shows.” But Hernandez wants more flexibility to insert those programs into World’s primetime schedule. She’s excited about World’s new program strategy and hopeful about working out an agreement.

APM’s audiences are growing across all of its channels, and Hernandez is particularly pleased with KUAT Kids. Its audience is second only to KUAT’s primary service, which broadcasts children’s programming from 5 a.m. to noon, a much smaller footprint than most stations. Hernandez scaled back children’s programs after hearing from adult viewers who wanted something to watch during the daytime. So “it was the audience that gave us the idea,” she said.