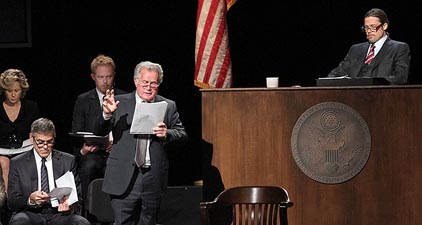 As attorneys in court, Clooney and Sheen oppose Proposition 8; Brad Pitt is the judge in the benefit L.A. Theatre Works performance.

On Sunday, June 10, L.A. Theatre Works debuts a radio docudrama about the federal court case that overturned the referendum that banned  same-sex marriage in California.

As attorneys in court, Clooney and Sheen oppose Proposition 8; Brad Pitt is the judge in the benefit L.A. Theatre Works performance.

Olson and Boies had been combatants in arguing Bush v. Gore before the U.S. Supreme Court, so their alliance in the Perry case added a twist to the case and the dramatization. Kevin Bacon plays the lead attorney for Prop 8’s proponents.

The cast also includes, among others, actors Jamie Lee Curtis and Christine Lahti as the plaintiffs.

Reiner’s advocacy for gay marriage drew him into the project. With his wife Michelle and political consultant Chad Griffin, he co-founded the American Federation for Equal Rights specifically to challenge Proposition 8.

With Black, who is an AFER board member, Reiner attended the proceedings at the federal district court in San Francisco in June 2010. They were impressed by the trial but dismayed when the U.S. Supreme Court approved an emergency appeal to ban cameras from the courtroom.

“It was such an extraordinary trial,” Reiner told Current. “We felt that it was important for the public to see what happened in that courtroom.”

Taking a cue from Shakespeare’s Hamlet, they decided “the play’s the thing.” In writing the script, Black combined passages from trial transcripts with dialogue between the plaintiffs. Early this year 8 had a one-night run in New York before the March 3 benefit performance in Los Angeles, which was recorded for LATW.

Reiner had no problem recruiting actors. “Everybody wanted to do it,” Reiner said. “When you have good writing, and a play that’s about something that has a chance to have a real impact on the audience and actually effectuate change, actors want to do whatever they can.”

Challenges came on the technical side. The production was staged for the theater, but five videographers were on hand to shoot a live video stream presented on YouTube. And L.A. Theatre Works reconfigured its production process to accommodate the special demands of the play. “We have a 10-play recording series . . . and every play is recorded very, very carefully six times,” said Susan Loewenberg, LATW’s producing director. “We set it up like an old-fashioned radio show — people love coming and watching, but it is all geared toward getting a great recording.”

8 was something completely different for LATW. Producers had only one shot at recording the sound. Loewenberg worked with Reiner and his technical staff to make sure that the audio set-up was solid. “We talked about what kind of microphones we wanted and what we needed the actors to do with regard to the microphones,” she said.

Loewenberg also had only one shot at gathering behind-the-scenes material that will be packaged with CD and digital-download versions of 8. She interviewed Clooney, Curtis, Sheen and other participants backstage and recorded studio interviews with Olson and Boies. “One way or the other, we would like to get this wonderful play out there to the public,” she said.

In fact, Loewenberg hopes 8 will draw attention to LATW’s regular programming. At least 25 stations have picked up the special, expanding its availability well beyond the 56 stations that air LATW regularly. Stations presenting special broadcasts of 8 include Maine Public Radio, WABE and WRFG in Atlanta, WPFW in Washington, D.C.

“But it’s not easy to get program directors to carry a two-hour show,” Loewenberg said. “Some of the great stations not only take it but swear by it. But, given the quality of the show, and the extraordinary talent, it’s interesting that it’s not on 300 or 400 stations.”

The web video production of 8 is still available for online viewing on YouTube at tinyurl.com/LATheatreWorks. But AFER may remove the video from its YouTube channel.

The station will feature long-form multimedia columns by more than 20 artistic advisors, cultural critics, curators and journalists. Popular posts will be made into short video documentaries each week and then compiled into broadcast episodes. Throughout the process, Artbound’s online audience may share, discuss and comment on the content.

Juan Devis, KCET’s executive producer, said Artbound provides “numerous entry points” for audiences to experience the cultural landscape of the 11-county region, which he described as “a polyglot cultural and artistic area with international reach.”

The Artbound project is funded by the Los Angeles County Arts Commission and the city’s Department of Cultural Affairs.

San Francisco’s KQED looks at the future of the Sacramento-San Joaquin Delta.

As part of Quest, its multimedia series about nature and the environment, the broadcaster examined the history and significance of the delta, which provides water for two-thirds of California’s residents. Three radio reports and several interactive features were produced in collaboration with Stanford University’s Bill Lane Center for the American West and are online. The Columbia Journalism Review singled out the series for “pushing multimedia and long-form science journalism forward in the West.”