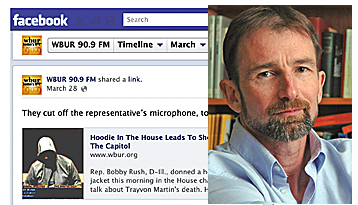 WBUR’s Facebook page, and Lubbock’s mobile phone, were buzzing over a story about what happened when Illinois Rep. Bobby Rush wore a hoodie in the House of Representatives.

WBUR’s Facebook page, and Lubbock’s mobile phone, were buzzing over a story about what happened when Illinois Rep. Bobby Rush wore a hoodie in the House of Representatives.

Now that most public media stations have become active on social networks — with some combination of Facebook pages, Twitter accounts, blogs and YouTube channels — staff members at many stations are struggling with the question: Are we getting the most bang for our social-media buck?

After all, building and maintaining a meaningful social media presence requires a significant investment of time — and it’s not always easy to measure the return on that investment.

What does social media success look like, anyway? Is it when you reach 1,000 followers? 10,000? Have you succeeded when your blog posts generate lots of comments on a regular basis? What if your blog generates comments, but traffic is low? What if you have a ton of Twitter followers, but no one retweets you?

The explosion of social networking among baby boomers underscores just how important it is for public media stations to be strategic about their use of social media.

While younger Internet users still dominate social networks, older adults represent the fastest-growing user base, according to an August 2011 report from the Pew Center for the Internet and American Life. Among boomer-aged Internet users ages 50 to 64, the percentage reporting usage of social networking sites on a typical day grew from 20 percent to 32 percent, a significant boost of 60 percent from the previous year, Pew reported. In addition, Nielsen reported in the third quarter of 2011 that social networking had become the top activity among all Internet users.

What does this mean for public media stations? Effective use of social media is no longer just about courting new, younger audiences — it’s about engaging Americans across a broad demographic spectrum. Recognizing social media’s strategic importance doesn’t make the job of measuring the return on a station’s investment in these new platforms — its social media “ROI” — any easier.

The challenge of measuring social media ROI isn’t unique to public media. Businesses in all sectors continue to grapple with metrics for measuring their effectiveness on social platforms. During the SXSW Interactive Festival in March, a panel session titled “What’s So [Bleeping] Hard About Social ROI?” featured speakers from the corporate and nonprofit sectors. The panelists raised more questions than they answered, including: What is the ROI of not engaging in social media? And could measuring ROI in fact be counterproductive, if the process of measurement takes an inordinate amount of time?

On his blog, Avinash Kaushik, a digital-marketing evangelist at Google and author of two books about web analytics, proposes a middle ground between ignoring ROI and obsessing over it. Measure the economic value of your social media activities, he says — the “sum of short- and long-term revenue and cost savings” — but remember that economic value is just one of several key social media metrics. “You don’t participate in social media to only drive business outcomes,” Kaushik writes. “I cannot stress that enough. If that is your primary objective, you are going to suck at it.”

While public media digital specialists haven’t embraced Kaushik’s precise terminology — none of those interviewed by Current mentioned a “conversation rate,” for example — they described metrics that line up with each of the categories he outlines. Many of the metrics they use echo those recommended in the Social Media Handbook commissioned by CPB last year.

he handbook is a resource for stations formulating their social media strategies; it lists dozens of social media metrics that stations can measure, from Facebook “likes” to Flickr comments and podcast subscribers. But to make the best use of the staff time dedicated to social media, stations need to prioritize the metrics that matter most for their organization. When it comes to that prioritization process, the handbook offers little guidance.

“If you had to put [our] station’s goal on a bumper sticker,” says Robin Lubbock, social media director at WBUR in Boston, “it would be something like, ‘To create clarity in a complex world.’” Accordingly, “success in social media would do just that — but what’s the tool to measure that?”

Lubbock’s comment underscores the limits of measuring the impact of social media, which aren’t all that different, in fact, from the limits stations face in measuring impact overall. No metric or analytics tool can assess whether a station’s Facebook page creates clarity in a complex world — just as there’s no way to conclusively measure whether your on-air programming, community outreach or any other station activities are achieving that mission.

But you can evaluate whether your social media content supports your station’s mission. You can measure traffic to that content on your website. And you can measure what percentage of your Facebook followers are clicking on that content. You can also assess whether discussions about your content on social networks seem to be deepening your audience’s understanding of key issues.

In other words, social media is one part of a constellation of platforms and activities that help stations achieve their goals. Its success should be measured in that context, not in a vacuum that tallies sums of fans and followers and calls it a day.

“I am very adamant that our metrics must match our goals,” says Kim Bui, associate editor of social media and outreach at KPCC-FM in Pasadena, Calif. “Currently, our goals are to expand our audience reach and engagement. Next year, that might change, and so must the metrics we track.”

Amy Sample Ward, nonprofit social media consultant and membership director at the Nonprofit Technology Network (NTEN), writes in an email that a station should use data about social media performance to “identify the larger stories of your organization’s work or impact.” For example, “look for patterns or activity that comes from other actions in the organization (do Facebook comments increase when a staff person attends an offline event?).”

WBUR’s Lubbock estimates he spends about one afternoon per month assembling formal social media reports, but he’s also monitoring and analyzing social media activity on a daily basis. It is this “real-time monitoring” that yields the most valuable insight , he says, because it offers “the best understanding of what’s happening and when we’re succeeding.”

When Lubbock says “real-time,” he means it: He has an app called Boxcar on his phone so he can “literally feel the buzz when people are retweeting and mentioning WBUR on Twitter.”

At WSKG, a joint licensee in Binghamton, N.Y., new media and public relations specialist Teresa Peltier spends about 45 minutes each week monitoring social media performance. She presents the data to her director, who takes it to the c.e.o. “We also go through the data quarterly,” she says, “to ensure we are meeting our goals for the year.”

At the other end of the spectrum, St. Louis community radio station KDHX spends “very little time” creating formal reports on social media interactions, says Steven Ley, director of Internet and information technology. “We think it’s important to have the information available to answer our questions, but put most of our energy into creating content or facilitating the creation of content. At most, we spend two to three hours twice a month compiling data and sharing with everyone who makes content-direction decisions.”

Regardless of how much time digital strategists at stations spend on formal reporting, they rely on many of the same social media analytics tools to measure their work. Google Analytics, HootSuite, Facebook Insights,

Bit.ly and other URL shorteners are popular choices. Several digital specialists also mentioned using Klout to assess their relative digital influence, though others question its accuracy.

For those looking to dig deeper into the data they gather about social media, Ward recommends low- or no-cost options: Sprout Social’s $9/month plan, and the free level of Radian6. She suggests exhausting all free options before considering a fee-based tool and using a free trial before paying for software.

The task of measuring social media success doesn’t fall to marketing or social media staff alone. Graham Griffith, an independent media strategist who worked as founding executive producer of WNYC’s The Takeaway and as senior producer at WBUR and On Point, recently began coaching journalists on using social media more effectively. To assess whether they’re getting the most bang for their social-media buck, Griffith encourages reporters to ask themselves three questions each week, such as:

This weekly, targeted self-assessment helps reporters maximize the time they spend using social media. If the questions they ask themselves generate more “no’s” than “yes’s,” Griffith says, then you’ve got a problem — but the good news is that you can course-correct immediately.

Second, Griffith emphasizes shared accountability, rather than placing all responsibility for social media success on a central strategist or manager. As KDHX’s Ley argues, “Social media is just another communication and engagement space where we achieve our mission — and that’s everybody’s job.”

Petri Darbi, digital media and communications director at the Make-A-Wish Foundation and a panelist on the SXSW panel on social media ROI, reinforced this point via email: “Social media supports a larger ecosystem of branding, marketing,

ommunications, fundraising, and other efforts.” Few, if any, of the Make-A-Wish Foundation’s 62 local chapters have dedicated social media staff, which means that responsibility for this work is spread around each organization by necessity.

“Social media doesn’t have to be one person’s responsibility,” he says. “Ideally, every person, every department could potentially play a role in finding how social channels connect them more closely with stakeholders and supporters, and fulfill the organization’s key business objectives.”

For Griffith, social networks are the new public square — which makes them a critical place where journalists and others in public media should spend time to “get a bead on the zeitgeist.”

Let’s stick with this metaphor for a moment. Imagine one staff member standing out in the commons, interacting with the public on the station’s behalf; now imagine the power of five or 10 or 20 people out there instead, striking up a range of conversations, gathering feedback, listening.

This kind of interaction takes time, and time is money. But there are many ways to measure the return on stations’ investments in social media — formal and informal, personal and organizational.

And if the results aren’t what station decision-makers hoped for, changing course doesn’t involve revamping a show concept or scrapping an outreach campaign. It just means trying something different tomorrow.

Two-thirds of online adults use social networking sites. A Pew report from August 2011 reports that usage is up from 61 percent to 65 percent in a year.

What’s So [Bleeping] Hard About Social ROI? Session description and speaker bios from this panel at the SXSW Interactive festival in March 2012..

One thought on “In social media metrics, ROI is more than a sum of fans”