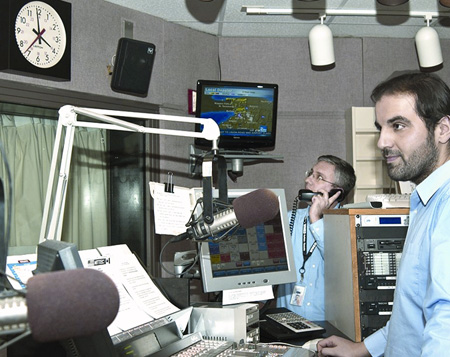 Public radio listeners are hearing more local news in Buffalo, where two stations that competed against each other for their loyalties and financial support are now operating as one.

After FCC and state education officials approved the WBFO license transfer in March, eight of 14 WBFO staff members became employees of the new licensee. They joined a much larger pubcasting operation that includes WNED-TV and WNED-FM, a classical music service on 94.5, at headquarters in downtown Buffalo.

WBFO hasn’t “gone away,” said Jim Ranney, station manager and news director. It retained its call letters and remains the primary public radio news service for Buffalo and southern Ontario. As before its merger, with the strength of its FM signal and service to distant communities via repeater stations, WBFO is the “bigger platform” for public radio news, he said.

The combined newsroom employs 12 journalists, five of whom work part-time, up from nine (three of whom were part-time). “It gives us that ability to have a few more people out on the street covering local news,” Ranney said. “We have more voices, more stories, and more local content.”

The most contentious element of the simulcasting arrangement — at least from the perspective of WBFO listeners — has been preservation of jazz and blues music shows, which had been a mainstay of WBFO’s evening and weekend schedules. Jazz, which aired 11 hours per week and overnight, has been replaced by the BBC World Service on 88.7, WBFO’s flagship radio channel.

“Every show that has been adjusted, moved, or cancelled — I’ve heard from those listeners,” said Ranney. “Change is difficult. However, I think that once we explain to them the reasoning behind it, many of them understand why it has happened.”

The combined operation improves the financial outlook for both stations, said WNED President Donald Boswell — and not only by eliminating the competition between them for listeners and member dollars. WBFO’s FM signal reaches into Toronto, Canada, a growing market where WNED-TV has already built an audience and donor base (Current, Aug. 8, 2011).

Ranked as Arbitron’s 56th largest radio market, Buffalo could no longer sustain two pubradio outlets. “There are markets much bigger than Buffalo that don’t have two NPR stations,” Boswell said. “From the listener’s point of view . . . you have a great diversity of programs, but it didn’t make either station truly financially viable long-term.”

“Right now, knowing that Buffalo is spiraling downward, clearly the Toronto [and] southern Ontario market has been really increasing in its population and corporate foundation bases,” said Boswell. “We want to take advantage of building that marketplace with radio as we’ve done with the TV side and really look to the future.”

“This was just a perfect opportunity for us to keep WBFO a local asset in the public broadcasting realm, and it really is a bigger stage for us,” Ranney said.