Unless fate starts smiling again upon public TV, or its leaders make significant changes on their own, it will remain the worried and declining branch of public media.

Between the years 1995 and 2010, public television stations’ cash revenues rose, plateaued and then crashed with the 2008 recession, falling altogether 14 percent: down $291 million (adjusted 2010 dollars). 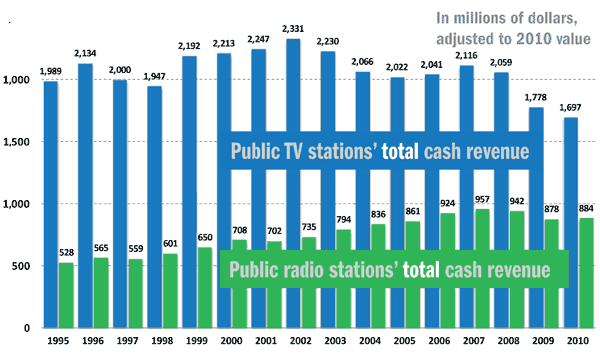 Though television still has the larger footprint in audience and budget, radio’s proceeds are now nearly equal to the reduced levels of TV in some revenue lines.

In membership and individual contributions, public radio’s revenue was a little more than one-third of TV’s in 1995, but by 2010, it was just 11 percent smaller. In business underwriting, radio’s income was 13 percent short of TV’s.

The most recent recession slammed donations to both TV and radio and indirectly hurt state and university aid to the field by putting new taxpayer fervor behind the budget-cutting and deficit-reduction movements. Those now threaten what has become their most stable income source, the CPB appropriation from Congress.

But TV has taken a markedly darker path. While public radio leaders expanded audiences, by starting new stations and even buying frequencies from commercial and religious broadcasters, TV suffered more from audience fragmentation, declining to the point where it may have to change its game plan to keep a substantial role in national life.

(Annual revenue figures in this article, unless otherwise attributed, come from CPB surveys of station finances and cover only 357 noncommercial radio licensees and 171 TV licensees eligible for CPB aid. For consistency and simplicity, revenue figures in this article are adjusted by Current to remove the effect of inflation, reflecting the buying power of dollars in 2010.)

It’s not clear whether multiple rounds of budget-cutting and layoffs in both TV and radio have kept licensees out of serious fiscal trouble. Even after painful downsizing, 67 percent of public TV stations didn’t break even in fiscal 2010, CPB has said. While red ink is worrisome, only four PBS-member stations have asked the network “for a little bit more time to pay the PBS dues,” says Tom Axtell of Vegas PBS, who chairs PBS’s Strategic Planning Advisory Group.

To help the stations, the advisory group is asking PBS to give priority to two objectives, Axtell told Current. One goal is survivability, with stronger revenues and cost savings, and the other is keeping PBS on local channels, with smooth transitions to new operators in regions where a pubTV station folds.

The advisory group isn’t trying to dictate decisions for local stations, but only suggesting “how we would facilitate changes should they occur.” Station managers generally agree that PBS’s role in such cases should be to maintain “universal service” to the population, Axtell told Current. When KCET dropped out of PBS as the major PBS outlet in Los Angeles a year ago, the network and the new primary station, KOCE, pulled off “a remarkably smooth transition.”

Another public TV leadership group, the Affinity Group Coalition, agreed in September to work with the PBS advisory group, engage station boards and others to counter negative trends, including “a decrease in the amount of local programming stations are able to achieve and an erosion of investment in national programming.”

The coalition resolution “endorses and encourages the exploration of operational centralization/outsourcing and station consolidation so as to enhance local content and services.”

The Great Recession has left public TV and public radio in drastically different conditions. TV stations’ cash revenue peaked at $2.33 billion (adjusted dollars) in 2003, stuttering after the milder 2000-01 recession and falling by $635 million by 2010 — including a drop of $419 million in the recession-clobbered years between fiscal 2007 and 2010.

In the 1995-2010 period Current examined — basically the Internet era, since the Web took off — the contrast between public TV and radio is stark.  As TV revenues shrunk, radio revenues grew. Radio reported year-to-year cash revenue increases for 12 straight years until the deeper recession hit in 2008.  And despite a $73 million revenue decline in 2009–11, radio ended the last decade and a half with annual revenues up by $356 million a year.

Audience-sensitive revenue — individual giving: Radio not only faced less channel competition than public TV in its strong program types, but many of its leaders concentrated on boosting the kinds of “listener-sensitive” revenue over which they had at least some control — membership income from a growing audience, plus underwriting, sold at rates that rise with the audience. 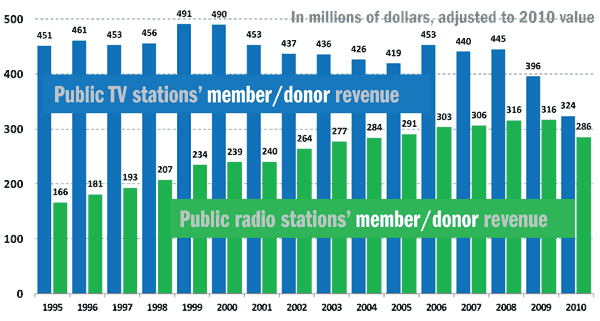 In contrast, public TV, like other established TV networks, faced growing competition from new channels cutting into its audience. That ultimately thinned out its legions of donors.

Fewer viewers meant fewer donors. PubTV stations’ member/donor lists shrank, slipping from their high point of 5.03 million in fiscal year 1993. From 1995 to 2010, the total number of donors per year clicked downward in 14 out of 15 years, with total TV memberships falling by 1.86 million, a drop of 37 percent.

Gross membership revenue actually increased in some years. With lengthened pledge drives and expensive premiums, public TV’s loyal donors doubled the size of their average annual giving from $60 per donor in 1993 to $125 per donor in 2009.

The result for radio was: Stations’ revenue grew every year for two decades, gaining 72 percent and reaching $285 million.

Audience-sensitive revenue — underwriting: An even more dramatic pattern emerged in business underwriting. Radio had a little more than one-fifth of TV’s corporate support in fiscal 1995 but ended fiscal 2010 with more than four-fifths. TV station underwriting fell by $106 million while radio’s grew by almost as much, $96 million.

Both TV and radio expanded their underwriting sales substantially before 2000 and fell back in the wake of the Dot-com Bust. Since 2003, their fates have diverged. TV’s sales dropped seven of the eight years, losing its gains of the 1990s — the annual total shrinking 45 percent, down by $148 million.

Radio regained its footing, growing to a peak in fiscal 2008 as the next recession came on. In the decade’s last three years, TV underwriting contracted 32 percent and radio 14 percent.

Federal revenue: Pubcasting’s steadiest revenue source, ironically, is the federal contribution that has survived for decades under death threat from a major political party.

It’s also a subject of controversy among some on the radio team. With some covetousness, they point out that public TV gets favorable treatment from CPB’s authorizing law, which directs three-quarters of its grant money to TV. To their annoyance, the proportion was formalized by Congress in 1981 to put an end to a previous era of TV-versus-radio haggling.

Outside the field, the controversy enlists opponents of federal spending and conservatives unhappy with some PBS and NPR programs. They’ve twice put dents in the total of CPB appropriations and grants from various federal agencies and endowments.

In fiscal 2007, the sum began falling again with the economic slowdown that became the Great Recession. By fiscal 2010 total revenues had fallen to $449.4 million.

State and local government aid: Far more sustenance for public media flows from state and local governments than from the federal appropriation to CPB, but it was distributed disproportionately to relatively rural Southern and Midwestern states where state governments themselves started statewide networks to develop public TV. Now the withdrawal of state money is leaving damage disproportionately.

The state/local contribution reached an absolute high of $813 million (adjusted dollars) in fiscal 1995, and slipped by $157 million by the year of 2009, when states were compelled to trim spending of all kinds to balance their budgets.

The sum has probably fallen further. In November, the media-reform group Free Press examined 24 states where public media are most dependent on state aid. Their annual assistance declined $85 million or 42 percent between fiscal years 2008 and 2012, the study found. Support had been cut in half in Alabama, Indiana, Kansas and South Carolina, and completely or nearly zeroed out in New Hampshire, New Jersey, Pennsylvania and Florida.