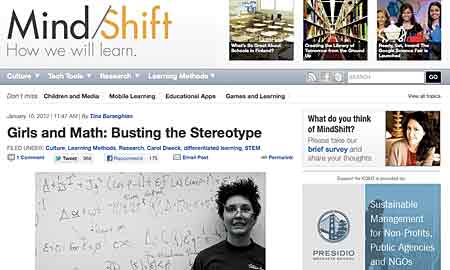 KQED’s MindShift, about education, is the most-read of the Argo blogs, attracting 200,000 unique page views a month.

KQED’s MindShift, about education, is the most-read of the Argo blogs, attracting 200,000 unique page views a month.

All but one of the dozen pubradio stations in NPR’s Project Argo plan to keep their specialized beat-bloggers working, even though the project’s original grant money is running out, according to Joel Sucherman, Argo program director.

News directors and managers at many participating stations say the project was a transformational experience for their bloggers and their newsrooms, altering their thinking about how to serve news audiences online.

Prior to Argo, WBUR.org’s CommonHealth blog specialized in wonkish coverage of health-care reform in Massachusetts. In late 2010, bloggers Carey Goldberg and Rachel Zimmerman took over and shifted its emphasis toward general-interest health news. Its monthly page views grew from 8,000 to “well over 100,000,” according to Goldberg.

CommonHealth competes with and often beats the Boston Globe in health-care reporting, according to Matt Thompson, editorial project manager at NPR. He described the blog as “one of the great successes” of the Project Argo. It demonstrates how bloggers with “great reporting skills, talent, and the ability to find online audiences can compete with and overtake competition within the market.”

The blogs’ first two years are being covered with $3 million in grants from the Knight Foundation and CPB. The official grant term for CPB expired in December, but because the project had a slow start, the corporation is working with NPR to extend payments through March without increasing the total grant, Sucherman said.

Eleven of the 12 blogs will continue at the expense of the participating stations, Sucherman said. Some will leave Argo’s WordPress platform to be integrated into a station site; others will adopt NPR Digital Services’ Drupal-based setup.

Sucherman declined to identify the station that’s discontinuing its Argo blog. Managers at six of the 12 stations told Current they’re committed to sustaining theirs for the foreseeable future.

Though NPR leaders have discussed the favorable advertising-sales appeal of highly specialized vertical blogs, the stations are far from finding ways for the blogs to pay for themselves. To help cover costs, they’re seeking foundation grants, major donor gifts, and sponsorship packages pairing broadcast spots with online ads. Some plan to add broadcast reports to their bloggers’ assignments.

The two-year experiment with newsgathering for “vertical” specialized audiences was named for the ship helmed by the mythical Greek heroes Jason and the Argonauts, who set sail in search of the Golden Fleece. Advocates say vertical blogs can be game-changers for stations trying to expand their services.

The view within NPR is that Argo has been successful enough that its editorial framework should be “spread to the rest of the system,” Sucherman said.

Argo is going to be an important part of NPR’s Digital Services offerings, he said. The experience will also be part of the curriculum in the digital-news training that NPR will roll out with support from a $1.5 million Knight Foundation grant announced last month.

“We’re in the planning phase for the coming year, and the Knight training grant is going to allow us to work with many more stations now on this overall digital strategy,” Sucherman said. StateImpact, the NPR project supporting station-based enterprise reporting on state governments, is another key priority for NPR’s digital journalism team.

At Current’s deadline, NPR was preparing to release as open-source code the project’s adaption of WordPress, as well as a series of tutorials on the blogging practices followed by Argo bloggers.  The website created for the release, which includes an overview of the project and links to all 12 station sites, is at argoproject.org.

The release fulfills a requirement of NPR’s grant contracts with CPB and the Knight Foundation and honors the philosophy of sharing tools and lessons within the open- source community.

The objective of the Argo pilot was to “test the proposition that one reporter can build audience and engagement online and help evolve the culture of a radio station by focusing on one niche area of content,” Sucherman said.

NPR sought to learn whether the blogs would attract local or national followings, but the idea was that “niche content could appeal to a broad spectrum of people who are not necessarily locally based,” he said.

Of the dozen Argo blogs, the ones with the biggest followings cover subjects that potentially appeal to a national audience. In addition to CommonHealth at WBUR, the most popular blogs are KQED.org’s MindShift, reporting on education technology, and KPBS.org’s HomePost, covering family life in the military.

Education is a key focus for KQED, and with MindShift it’s gaining recognition among funders for “exploring the future of learning,” said Tim Olson, the station v.p. who oversees both digital media and education. News coverage and policy discussions of education rarely consider how technology is changing classrooms, and there’s a big appetite for MindShift topics such as project-based learning and how teachers can use tablets.

“Many people in education and foundations are really interested in having people have conversations around those areas,” Olson said. “It’s a niche where there’s not enough intelligent coverage out there.”

MindShift generates nearly 200,000 unique page views a month, Olson said, and that stat makes it the top blog in the Argo Network. Its stories often rank among the most popular pages on KQED.org.

HomePost, at San Diego’s KPBS.org, counts fewer page views than MindShift, with nearly 58,000 in November, but is still relatively popular among the Argo blogs. And for KPBS it’s reaching a new audience — military wives and mothers. Many of them live within its TV and radio service areas but don’t watch or listen to its stations. From readers’ Facebook comments, blogger Beth Ford Roth surmises that they’re politically conservative and suspicious of public radio and television. She took over reporting for HomePost last February and shifted the blog’s editorial focus to family-oriented topics.

“Beth was able to connect to the community very quickly,” said Suzanne Marmion, KPBS director of news and editorial strategy. “She’s a natural — friendly and engaging without crossing the line into being opinionated.” Traffic to the website began growing steadily early last year and spiked in August, after Ford’s story about Hawkeye, the loyal dog of a fallen Navy Seal, went viral.

“This is very successful and valuable for our station, so we are actively looking for funding to continue,” Marmion said. “No matter what — we will continue with this, even if it’s out of our core budget for a year, until we get sustainable funding.”

Usage has grown more slowly for Argo blogs that are more narrowly tailored to their broadcast regions, including On Campus, which covers higher education in Minnesota for Minnesota Public Radio; Ecotrope, the Oregon Public Broadcasting blog on the environment of the Northwest; and The Key, WXPN’s blog on Philadelphia’s music scene. But those blogs have demonstrated enough potential to carry on as part of each station’s digital-service portfolio.

On Campus fits into MPR’s larger online news strategy, which includes other specialized blogs, said Chris Worthington, managing director of regional news. “The blog will live on, and we will be looking at how the reporter can work across other platforms,” particularly on the radio. He sees On Campus as an expansion of MPR’s education reporting for radio and knows anecdotally that it’s attracting a following among leaders in higher education and other media.

OPB is going to absorb Ecotrope into its newsroom when Argo funding ends, said Morgan Holm, v.p. of news and public affairs. “It’s an element of what we’re doing in online news, but we’re not expecting it to generate enough traffic to be sustainable on its own.”

It’s been an “exercise in patience” to build Ecotrope’s readership, Holm said, but with monthly visits now ranging from 18,000 to 22,000, he sees enough progress.

Ecotrope blogger Cassandra Profita’s reports are also being distributed within EarthFix, the CPB-backed Local Journalism Center operated by public media stations in the Northwest, and to newspapers around the state. “It’s meeting a need for local news reporting on the environment, especially for small newspapers that lack resources to cover this beat,” Holm said.

Argo includes one music blog — The Key, from WXPN, Philadelphia’s Triple A contemporary music station. Sucherman called it a “zebra among horses” and pointed to the recorded performances in its Key Studio Sessions as a special success. The website for music video and audio downloads won a $50,000 Knight Arts Challenge grant last spring to showcase the work of local musicians.

Participating in Argo enabled WXPN to spotlight its work on behalf of homegrown talent, creating a digital space that is “one-stop shopping for local music,” said General Manager Roger LaMay.

“It’s core to our mission and what we need to be doing to connect to the local music community,” he said, but he’s concerned about the longer-term funding picture.  “I’m sorry that the launch funding phase was so brief. We would have liked the opportunity to have it extended.”

Still, LaMay recognizes that WXPN couldn’t have created and built The Key without Argo pilot funding, and he’s already talking it up with major donors. “It’s exactly what Triple A stations need to be doing — getting involved with your music community.”

Decisions about what to do when the Argo pilot arrived at shore and released its blogging crew have been difficult for all stations, even the news powerhouses.

“This was additive to our budget once the Argo money ran out, and it was something that weighed on us a lot,” said WBUR’s Davidow. “We had to ask, ‘Was this something we wanted to commit our resources to, and is it something that serves our audience and our donors?’ At the end of day, the answer was ‘Yes.’”

DCentric
The changing face of the District
WAMU, Washington, D.C.

Empire
Everything you need to know about New York state politics and governance
WNYC, New York

The Informant
Cops, courts and communities in the Bay Area
KALW, San Francisco

Mindshift
How we will learn
KQED, San Francisco

On Campus
Everything higher education in Minnesota
Minnesota Public Radio

In MediaShift, Argo Editorial Director Matt Thompson elaborates on what he’d do differently if Project Argo were starting over in 2012: WBUR.org’s Common Health delivered high-impact, magazine style reporting with Rachel Zimmerman’s feature on the “awful complications” of vaginal mesh surgery.

Wikipedia on the myth of Jason and the Argonauts.

Also: Annotated map of their voyage.