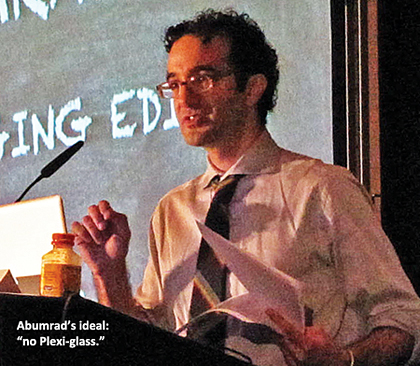 There’s some heavy-duty soul-searching going on in public radio. The Public Radio Program Directors conference, Sept. 20–23 in Baltimore, sidelined its usual celebrations of pubradio’s audience growth and its journalistic ascendency.

Instead, participants grappled with big questions about challenges ahead and wondered aloud about how to move forward after a year of political calamity at NPR. Progress reports about ongoing reforms were freighted with a new urgency: giving exposure to innovative new programs, raising stations’ ambitions for local reporting, opening the field to more diverse voices and listeners.

Podium speeches promoting the ideals of creative risk-taking and collaboration generated plenty of conversation among station programmers as well as a big turnout of independent producers — 120 were attracted to this year’s PRPD by discounted admissions and indie-oriented events.

Some indies nevertheless held onto doubts that station gatekeepers would go beyond the talk and actually commit money and airtime to producers working on the fringes of the system.

Independent producer and Cape Cod broadcaster Jay Allison challenged station colleagues to examine their consciences for assuming that stations shouldn’t have to pay for new shows, and he urged them to endow a “risk fund” that would invest in promising program ideas.

In Allison’s “benediction” speech, which closed the conference, he called on program directors to make space in their schedules to try innovative programs and to develop a station culture that lets talent take creative risks.

“We all dance at that edge, wanting to go the whole hog, but just worried that our audience won’t go there with us,” Allison said. “Perhaps we imagine we’re protecting our audience by proxy. But they don’t want protection; they want our passion.”

The partisan bruising that NPR and member stations took over the past year colored many exchanges in Baltimore. PRPD President Arthur Cohen and consultant Fred Jacobs presented survey results showing that NPR’s reputation remains solid among core listeners. In a summer survey of 27,000 listeners from station databases, 86 percent of respondents disagreed with the statement “I have lost respect for NPR over the past year.” Eighty percent disagreed with the view that Congress treated pubradio fairly during the year’s budget debates. More than 70 percent disagreed with the view that public radio is for “elites,” a frequent criticism lobbed by NPR’s political foes.

“NPR’s reputation looks strong and intact,” said Jacobs, whose firm managed the survey with PRPD.  The findings may have offered some reassurance but didn’t erase memories of the political fight or worries that public radio journalists will be less willing to ask tough questions of 2012 candidates.

Responding to that concern, voiced by producer Bari Scott during an NPR-sponsored luncheon, weekend hosts Audie Cornish and Guy Raz said this year’s escalated conflicts with conservatives won’t discourage them from asking tough questions of Republican candidates, although Cornish acknowledged it’s getting harder for show bookers to get conservatives to appear on NPR. Some political leaders and powerbrokers are much too slick to answer questions unless they fit their own well-rehearsed narratives, Raz added.

American Public Media chief Jon McTaggart urged the crowd not to dismiss criticisms leveled at the field during NPR’s political crisis. Public radio was vulnerable to the attack because its service is so narrowly tailored to core listeners. “Only 10 percent of Americans care about us,” McTaggart said.  “If our audience were more diverse, . . . we wouldn’t have been as vulnerable. Ten percent is a lot, but it’s not enough.”

Public radio could boost its audience by 15 percent through more effective marketing, McTaggart said. “The people who aren’t listening to us aren’t being served by other media,” and public radio has the potential to bring many of them into its listenership.

McTaggart proposed that the field invest in “more compelling content for more diverse audiences” and “sophisticated, results-oriented marketing,” urging p.d.’s to take up this cause within their stations. “One of the reasons we’re in this pickle is because we haven’t done a very good job of telling our stories,” McTaggart said. He also called for marketing specialists to become involved in R&D of new programs. They’ve “done the research” with audiences and know public radio’s “pain points,” he said.

At times, attendees could see tensions fraying the ties that bind public radio’s various constituencies. Jeff Hansen of Seattle’s KUOW asked station programmers how many had risked defending NPR’s firing of Juan Williams when angry callers flooded their phones last October and how many had ducked the issue by explaining that the station simply buys NPR programming.

Though Hansen’s Sept. 20 session was packed, only handfuls of station executives raised hands for either option.

“We have a split personality,” Hansen said. “We enjoy the NPR brand and its national reputation, but on the other hand, we don’t want to bail them out in rough weather.”

“Being a public radio journalist right now is a lot like being a teenager,” said Iowa Public Radio’s Jonathan Ahl in a later session. “We’ve never had a better opportunity to define who we are, and yet we’ve never been more sensitive to what people are saying about us.”

“Change is not something you plan”

Jad Abumrad, who had just received a MacArthur Foundation fellowship for his work with WNYC’s Radiolab, described the process of defining himself as a producer as akin to wondering aimlessly in a forest, a process that set off “gut churn” and generated seemingly endless desperation.

Abumrad recalled that he initially went on air without a set idea of how his show should sound, begged producers for content, and invited listeners to scream into the voicemail system.

“We did many hours of bad radio that I couldn’t bear to play for you,” Abumrad admitted to radio colleagues a day after receiving the prestigious MacArthur fellowship.

Though many now revere the science program’s production style as a breakthrough for public radio, Abumrad and coworkers forged it through risky trial and error. “The idea that this program could be coherent didn’t happen until one to one-and-a-half years in.”

As he sees it, Abumrad said, “Change is not something you can plan. It’s only something that you can recognize afterwards.”

Looking back, the producer said, Radiolab’s defining characteristic was “No Plexiglass” — an ideal jotted on a Post-it note during a brainstorming session. In other words, the producers wanted to strip away even the transparent barriers between listeners and Radiolab storytellers. Abumrad and cohost Robert Krulwich would react to the wonders of science with the full range of real emotions and not just the limited scope ordinarily permitted for news-media professionals. The Post-it scribbling gave a name “to something we had been incoherently pointing towards,” Abumrad said.

The “No Plexiglass” aesthetic described by Abumrad has many practitioners and influential advocates, judging by the big turnout for a Sept. 22 panel eager to reinvent the sound of pubradio news.

Ira Glass of This American Life restated his case for a more authentic public radio that lets reporters and hosts share emotions and reveal opinions, sounding less like “stiffs” and more like real people.

Glass advocated a more conversational approach to news delivery as the benediction speaker for last year’s PRPD; Adam Davidson of NPR’s Planet Money team joined him for the session this year. Their tips for reporters:

The session attracted a standing-room-only audience of indies and TAL fans who’d gladly march into the hinterlands at Glass’s command to bring more personal-narrative reporting to public radio.

Where are the opportunities for indies to be “boots on the ground” reporters for public radio? asked a young producer from Boston.

Glass’s answer must have been hard to take: There is no easy way to break into this field. “I was a freelancer for years and years and years,” Glass said. Produce for whatever platform will take your stories, distribute them on PRX, make pitches to all the big shows, he advised. Keep at it until you find your voice.

“It’s always been like this in this system,” he added. “When I was learning, I supported myself as a secretary.”

A bright spot for indies came later that evening, when the Association of Independents in Radio unveiled Localore, its new initiative pairing independent producers with local stations (preview, Current, Sept. 19).

CPB President Pat Harrison announced the underlying $1.25 million grant for the AIR project. More than 20 public radio and television stations are vying to attract imaginative indies to work with them in creating media that, as AIR President Sue Schardt described it, expand both their audience and “capacity to create something new.”

In an interview, Allison worried that the AIR initiative won’t be enough to keep indies  working in pubradio. The projects won’t have the national scale of those backed by CPB’s defunct Radio Program Fund and its earlier Satellite Program Development Fund, he said.

“You can talk all day about encouraging talent, but what that means practically is that you’ve got to give them money,” Allison said. “You’ve got to hire them.”