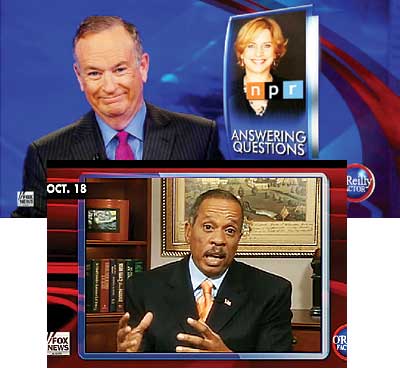 Fox News disciplinarian O’Reilly (upper photo) has NPR News and liberals where he wants them: crammed uneasily into the same box labeled “pinhead.” NPR had sudden fired Williams (lower photo), and Fox supplied a juicier explanation than NPR did.

Top NPR officials may have thought their Oct. 20 decision to dismiss veteran journalist Juan Williams was about journalistic objectivity, but to many outsiders it sounded more like a story of arrogant lefty political correctness.

That narrative opened up public radio — and all of public broadcasting — to a political attack that may help the candidates of Fox News and the Republican Party rally their conservative base for the midterm elections Nov. 2.

Criticism of the firing was not limited to the partisan right. It spread rapidly through the mediasphere and scorched the ears of station volunteers and employees.

A week after the firing, by Oct. 27, the office of ombudsman Alicia Shepard had received more than 22,000 e-mails about Williams’ firing, eclipsing the feedback about any other issue in NPR’s history, Shepard said.

Many of the messages may have been inspired by Fox News or “some other group,” she said, but they were highly varied, not typical of the cut-and-paste messages from organized campaigns.

When NPR announced Williams’s dismissal, it cited only the latest O’Reilly appearance, and many perceived it as a concession to political correctness, not an enforcement of journalistic standards. Though some media picked up on NPR memos indicating a long history of newsroom concerns, a pre-election political bombardment was in full-swing, engulfing stations in the middle of pledge drives and heaping bad publicity on NPR and public broadcasters.

Objections escalated when NPR President Vivian Schiller told an audience at the Atlanta Press Club Oct. 21 that Williams’s “feelings that he expressed on Fox News are really between him and his psychiatrist or publicist.”

The full repercussions of Williams’ firing won’t be known for weeks or months — after NPR concludes the internal investigation that Schiller announced Oct. 24, and perhaps not until the post-election political order takes shape in Washington.

“‘Mistakes were made,’ as the saying goes, at a cost in trust and affection that will be more than fleeting,” summarized Tom Thomas and Terry Clifford, the prominent pubradio strategists who head the Maryland-based Station Resource Group, in an Oct. 28 memo to SRG-member stations.

“Perhaps the current outcries will produce little more than a really uncomfortable [congressional] hearing for Vivian Schiller,” Thomas and Clifford wrote. “But it is more probable that we are in for a more sustained and significant confrontation for which we — all of us in public media — are not as prepared as we should be.”

The story’s major moments unfolded in front of Fox News cameras: Williams delivered remarks on Bill O’Reilly’s talk show Oct. 18 that were trimmed down to lean red meat for both left and right. Three days later O’Reilly led the backlash against Williams’ firing, linking it to the $1.8 million grant recently received from liberal mega-philanthropist George Soros’s Open Society Institute, denouncing NPR as a “totalitarian outfit functioning as an arm of the far left” and calling for an end to any federal funding of the network.

“I think it’s reasonable to ask why Congress is spending taxpayers’ money to support a left-wing radio network — and in the wake of Juan Williams’ firing, it’s clearer than ever that’s what NPR is,” said House Republican leader John Boehner of Ohio.

“I had long believed that the many tentacles of public broadcasting should be reformed — not defunded,” Tomlinson wrote in the Washington Examiner Oct. 22. “I now realize I was wrong. Federal funding for NPR should be elim-inated — as should handouts to CPB and PBS.”

On Oct. 26, NPR turned over a bomb-threat letter to law enforcement, the Washington Post reported. The letter didn’t refer directly to the Williams firing, but NPR sources said the timing and tone suggested a connection.

Late last week, O’Reilly broadened his attack, describing both NPR and PBS as “liberal media outfits” receiving “nearly a half-billion dollars” of taxpayer funding. “There’s no need for government-funded media at all,” he said on his Oct. 27 commentary.

With the size of the federal deficit requiring big budget decisions in the next Congress, public broadcasting already faced a challenging climate on Capitol Hill. “Now there’s a new vigor on the part of the opposition,” said Dana Davis Rehm, NPR’s top spokeswoman.

“We certainly take this federal funding challenge extremely seriously,” Rehm said. Public radio’s reps on Capitol Hill need to “make it really clear that federal funding is primarily about stations.” If appropriations to CPB are reduced or eliminated, public radio stations would be the big losers.

The mechanisms designed to protect pubcasters from abrupt political interference — CPB’s role in distributing federal funding to stations, which decide which programs to buy from NPR and/or PBS — were lost in the initial charge to “defund NPR,” but stations found themselves on the frontlines.

Pubradio stations were revving up or running their fall pledge campaigns and were unprepared for the deluge of angry calls and messages. Many pubcasters took comfort in strong fundraising results, calls of support, and their discoveries that the angry callers were neither regular listeners nor members who might stop donating.

That view was short-sighted, according to an NPR News employee who requested anonymity. The employee said private contributions and other revenues couldn’t be expected to make up for the loss of federal aid to local stations.

With some station managers playing an angry blame game about NPR’s handling of the situation, other pubcasters worried that infighting could inflict more damage.

“If public radio is going to fulfill its promise of being a significant force in our country, then management has to elevate its behavior,” said Mikel Ellcessor, g.m. of WDET in Detroit. Rather than posting on NPR’s internal message board and other electronic forums, station execs should have “principled conversations” with members of the NPR Board, he said. “If public radio wants to be a cultural leader in this country, then the leaders of public radio have to act like cultural leaders.”

Schiller, who was hammered by Fox commentators and ambushed by its video crews, repeatedly apologized for the insensitive handling of Williams’ firing.

The NPR president initiated an internal investigation to document how her execs made the decision and carried it out, and she took full responsibility for the “unfortunate” process that damaged NPR’s reputation and transformed it into a punching bag in the ongoing culture wars.

“This was a decision of principle, made to protect NPR’s integrity and values as a news organization,” Schiller wrote in her memo Oct. 24. “I acknowledge that reasonable people can disagree about timing: whether NPR should have ended its relationship with Juan Williams earlier, on the occasion of other incidents; or whether this final episode warranted immediate termination of his contract.”

In addition to the internal review of Williams’ firing, NPR will re-examine its ethics guidelines, Schiller wrote, “to make them as clear and relevant as possible for our acquired show partners, our staff, Member stations and the public.”

Williams meanwhile emerged from the dustup with a three-year Fox deal worth almost $2 million that expands his role on the network and gives him a regular web column. From his new platform, he wrote that he was fired from NPR “for telling the truth,” and he denied accusations against him of bigotry.

“They are taking bits and pieces of what I said to go after me for daring to have a conversation with leading conservative thinkers,” he said of NPR. “They loathe the fact that I appear on Fox News. They don’t notice that I am challenging Bill O’Reilly and trading ideas with Sean Hannity. In their hubris they think by talking with O’Reilly or Hannity I am lending them legitimacy.”