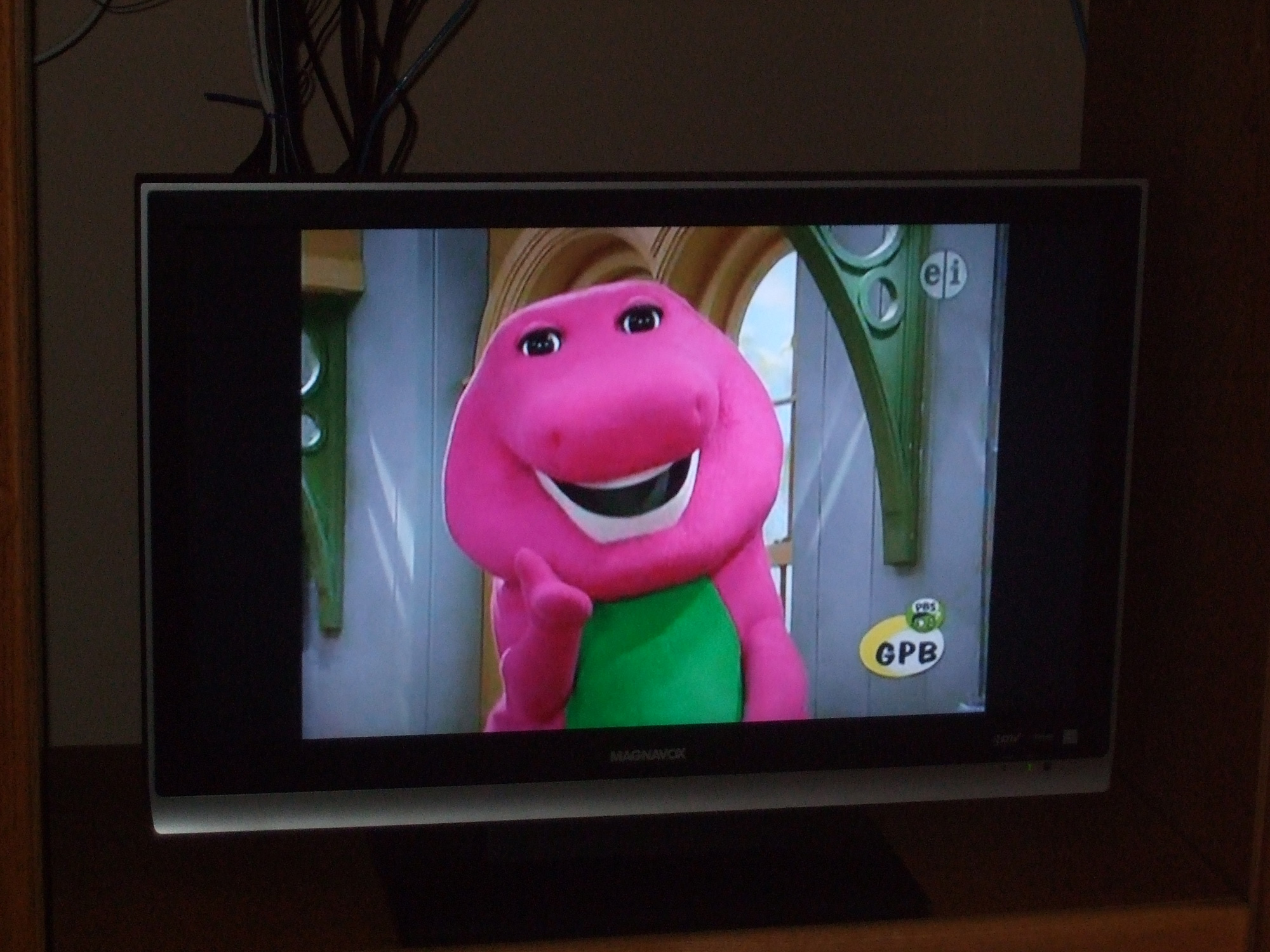 While earning the adulation of the nation’s toddlers, the six-foot dinosaur with his own PBS show has received an adverse response from some adults, among whom Barney-bashing is now in vogue.

What started early this year with anti-Barney newspaper columns and unkind rewrites of his happy songs reached the floor of the U.S. Senate last month, just as an appropriations bill carrying $320 million for CPB in fiscal 1996 moved toward a Senate vote.

But unlike last spring’s “Barneygate” disturbance about overcommercialized pledge drives with Barney premiums, this time public TV was taken to task for not cashing in on commercial opportunities.

“It seems only reasonable,” Dole said, “that before the taxpayers are asked to give public broadcasting a raise, a sincere effort ought to be made to share in the merchandising profits generated by taxpayer-subsidized programs, or to phase-out taxpayer subsidies for programs that clearly don’t need them.”

This was not the first time Sen. Dole has taken the floor to question PTV producers’ income from program-related merchandise. The Post article provided vindication for Dole and other Republican senators, who, he said, “took a lot of heat” for raising much the same issue during debate on CPB’s 1992 reauthorization.

At the CPB Board meeting Sept. 21, President Richard Carlson responded to Dole’s speech, describing public TV’s dealings with the Lyons Group as “much more complex” than the Post story made them out to be. Nevertheless, Carlson said he told his staff to make sure that, in “future contracts, public broadcasting gets a piece of the action.”

“All I can say is, this cash cow is out of the barn,” chimed in Victor Gold, a CPB Board member who persistently has voiced conservative concerns about programming and various CPB policies. Gold said he looks forward to the outcome of PBS’s contract negotiations with Barney‘s producers.

On the trail of the cow

CPB is looking to PBS to reach an new agreement with the Lyons Group and Connecticut PTV, coproducers of Barney & Friends. CPB itself no longer provides production funds for the series, and last year ended its own formal policy that gave it rights to certain ancillary income from programs that it backed.

“Most of the projects involved did not involve significant income,” explained Gene Katt, CPB senior v.p. of programming. “It required a lot of paperwork, both for us and for the producers.” CPB now allows producers to keep their ancillary income as long as they funnel their earnings into new productions.

As is the case with many new series, CPB and PBS jointly provided first-year funding for Barney — $2.25 million, in this case. Through deficit financing, Barney‘s coproducers kicked in an equal amount and delivered a package of 30 shows.

But for season two, after initially trying to drop the series, PBS responded to an outcry from stations and viewers, financing the new shows without CPB’s help. It committed $1.75 million over two fiscal years; Lyons Group and Connecticut PTV provided about 53 percent of the total cost to produce 18 new shows, according to PBS. Lyons spokeswoman Beth Ryan last week estimated that the coproducers’ share of costs for season two will be closer to 70 percent.

For the show’s third season, PBS’s negotiating objectives have changed. During contract talks for the second package, one of PBS’s goals was to retain extended rights for exclusive, unlimited broadcast of all 48 episodes, which it now holds through 1998.

Looking at a third package of new shows, what PBS now wants is to receive some income from the sale of Barney-related merchandise, according to Peter Downey, senior v.p. for program business affairs.

“We have an agreement in principle that Connecticut Public Television and PBS receive a share of the income, but the mechanics of that are not worked out,” said Downey.

In talks with PBS, Connecticut PTV’s Executive Vice President Larry Rifkin said, his organization and Lyons are looking for “consistency” in the amount of income they and producers of other kidvid programs are expected to return to the system. “We have an agreement to try to talk and see what each party is looking for in a relationship,” he reported.

All of PBS’s most recent preschool entries — Barney, Shining Time Station and Lamb Chop’s Play-Along — “have been successful to one degree or another,” said Rifkin. “They all have to be looked at in the same way.”

Interestingly, Rifkin did not mention that he wants “symmetry” with Sesame Street in these financial deals. The Street‘s producer, Children’s Television Workshop, plows its even larger licensing revenues back into programming, paying two-thirds of the annual cost of Sesame Street, as well as some costs of other CTW series and activities.

“Since 1978, CTW has actually spent $100 million in delivering Sesame Street,” said spokeswoman Ellen Morgenstern. That contribution, when combined with CTW’s support for educational children’s series like Ghostwriter, 3-2-1- Contact and Square One TV, makes the workshop the largest single non-governmental contributor to public TV.

“We are a not-for-profit company. No shareholders or other people share in our revenues,” said Morgenstern. Instead, CTW “plows the money into making programs that meet our mission.”

The distinction between a nonprofit and a for-profit producer is an important one, of course.

If PBS wants to avoid this kind of flak in the future, it will have to bargain shrewdly for a cut of licensing income without appearing to be swayed in its programming decisions by a potential commercial earnings.

“When we select projects, we don’t do it for the ancillary value,” Katt said. “We select them for what they will provide the audience. I don’t want anyone to get the idea we’re changing our position on that, although we will try to maximize our position.”

Exactly what Lyons and its licensees are earning is not public knowledge. Estimates of Barney-related sales are “all completely weird and not reliable,” according to Karen Raugust, editor of The Licensing Letter, a trade publication, but she said the reported $500 million figure is in the right ballpark. On that amount, royalty income to Lyons would be between $12.5 million and $25 million a year.

In comparison, cash registers ring up an estimated $800 million a year in sales of Sesame Street-related merchandise, said Raugust.

And Thomas the Tank Engine–“a hot property last year”–generated $750 million in retail sales over three years for Quality Family Entertainment, producer of Shining Time Station, she added. Lamp Chop products are “relatively new in the market,” and potential sales are hard to predict.

All parties agree that what’s been overlooked in the recent hoo-haw over Barney is that public television already has benefited remarkably from the program’s presence in the schedule. In on-air pledge drives, stations around the country have raised millions around Barney & Friends. Ratings for PBS’s preschool programs have exploded, showing a 77 percent increase over two years.

The audience increase is “certainly not all attributed to Barney,” acknowledged Ryan, although PBS has admitted the big guy’s contribution is considerable. Barney has “raised awareness of the system, which I think is just as important.”

And one public broadcasting entity–Connecticut PTV–already shares some of the earnings from program-related products. Information compiled for public TV’s response to Dole shows that the broadcaster has received “a little over $1 million” from sales of home videos and records, foreign distribution of the series, corporate underwriting and on-air membership income, according to Anne Young, congressional representative for America’s Public Television Stations.

Receipts from Barney pledging make up about half that amount, according to Rifkin; the remainder is CPT’s production and ancillary revenue to date. Additionally, when Connecticut recoups the more than $400,000 it invested as Barney‘s coproducer, its contract says that PBS and CPB will begin receiving a share of the revenues.

“I don’t think anyone who objectively looks at the [coproducers’] $4 million investment, increases in audience and membership, and the ancillary return over time could say this is not a well-constructed deal for everyone, over time,” said Rifkin. “To say PBS and CPB did not do well in the process, I think is wrong.”

Barney & Friends earns a pile of money, but not as much as claimed, and only part of it for public TV.