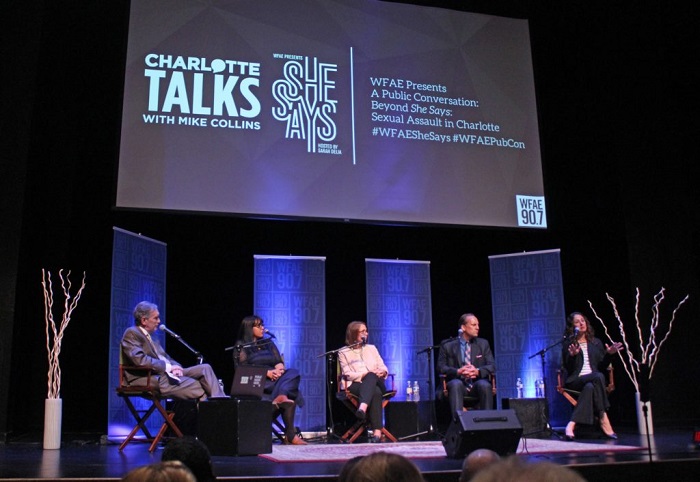 In a world full of #metoos, justice may appear as swift as one woman speaking out but is it? WFAE’s new investigative podcast “She Says,” follows the story of a sexual assault survivor in North Carolina’s Mecklenburg County and the long and difficult process of finding justice. As of this writing, no one has been brought to justice.

It can be a difficult and long process to find justice after being sexual assaulted. WFAE’s new investigative podcast, “She Says,” focuses on the story of one woman trying to do just that.

For the past year, award-winning WFAE journalist Sarah Delia has followed the story of a woman referred to as Linda who was sexually assaulted by a stranger in Charlotte, N.C. It’s been nearly three years since the assault, and Linda is still waiting for answers‚ even though she believes she’s known the truth the entire time.

“She Says” reveals Linda’s story over the course of the nine-episode weekly podcast series, which launched Thursday, May 31, 2018 and concludes on Thursday, August 2, 2018. The podcast takes a look at Linda’s case in a way that it hasn’t been looked at before, featuring conversations with detectives, nurses, forensic scientists and attorneys about how this system works. The podcast also features conversations with Linda and never-before-heard tape recorded from Linda’s interactions with the police.

Linda’s case, which is still ongoing, raises many questions: What can be done to improve this system sexual assault survivors must learn to maneuver (both on a local and national level)? And in Linda’s case, the most pressing question which has forced her to stay on this path‚ when will her perpetrator be brought to justice?

To note, “She Says” is more than an on-demand audio storytelling. It is a multimedia, multi-platform experience with audience responses and a live event component, all of which is for the community and with the community’s voices.