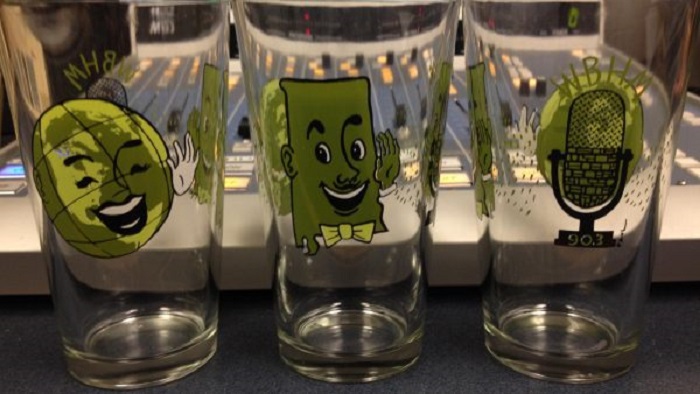 Each spring and fall for the last 5 years, WBHM has partnered with a local artist to create a design which is then featured on a pint glass that is given as a thank you gift exclusively during that fund drive. We only ask that the design be centered around the theme of public radio and feature our call letters. Other than that, the artist is free to create whatever they want (as long as it fits in the specified dimensions for the glass producers).

Birmingham is a town with a strong local arts community, and as a station, we wanted to support that community as well as produce more local, creative thank you gifts. Five years ago, WBHM began partnering twice a year with a popular local artist to create a public radio-themed design that we then feature on a pint glass. These glasses are then given as a thank you gift during the fund drive. We began offering them at the $90/year level but have since moved them to the $120/year level. This fall, we are on our twelfth glass!

We initially thought that the glasses would be popular, but we were unprepared for how popular they would really be! Our members have now come to expect a new glass and many have become “collectors.” We’ve also utilized this artwork on refrigerator magnets that we sell in our online store, paper fans that we give out at events, coffee mugs (which are becoming very popular) and t-shirts. Every artist has voluntarily donated their artwork to the station, and the ones who make their living selling their art have reported increased commissions, higher visibility at art shows, and large numbers of new patrons who discovered them through their affiliation with the station. We usually have the artist record a fund drive promo about why they love public radio and how it inspired their art, and we also have the artists on air the first morning of the drive as a special guest. To further our community engagement, we’ve also held two contests so that a member of the community at large could be the featured artist. We’ve seen great engagement around the contests with listeners voting for their favorites and sharing it within their circles.