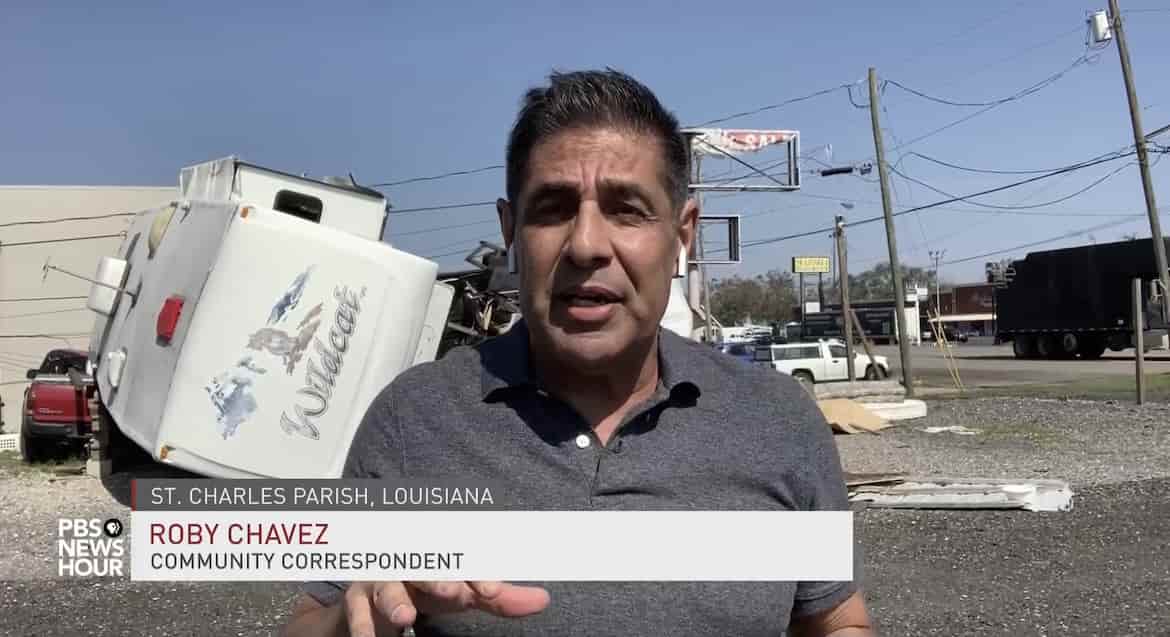 Roby Chavez is like every native of New Orleans coping with the fallout from Hurricane Ida. He just has to report on it, too.

“I’m sitting here watching the rain fall outside my window right now and wondering, ‘I have not had anyone check my roof yet. Will that leak finally come through?’” Chavez said in an interview Sept. 15, over two weeks after Ida first made landfall.

It’s now the job of this Louisiana native to tell New Orleans’ stories to the country as part of PBS NewsHour’s new Communities Initiative. Chavez returned to journalism to take on the NewsHour role after a decade of working in public relations. He left journalism in 2012 after 26 years as a local news anchor, disillusioned because he was no longer focusing on local topics.

Chavez has always had a passion for covering communities, he said, because local journalists can tell personal stories that the national media can’t.

“I went out and I talked to people last week who were living in tents because their homes were destroyed,” Chavez said. “The misery from a local perspective continues even after some of the national media has left. But the unique thing with the Communities Initiative is we’re still here. We’re still recording.”

With his roots in the city, the subjects of Chavez’s reporting can hold him accountable. “I was doing a story this week on this local grocery store down in the first parish that got a direct hit from Hurricane Ida. … As I was leaving, the lady said, ‘You better do me right, or I’m going to go find your family,’ because she knew where my family lived,” Chavez laughed.

Striving for a ‘complete picture’

NewsHour launched the Communities Initiative in March with the goal of highlighting cities with diverse populations often overlooked in national news coverage. The show sought to hire six journalists based in the cities with deep knowledge of local intricacies.

So far, it has hired journalists in four locations. In Fresno, Calif., Cresencio Rodriguez-Delgado has covered the state’s water crisis and its effect on farmers. From Dearborn, Mich., Frances Kai-Hwa Wang has reported on Detroit’s growing Muslim and Arab population and its influence on politics. St. Louis reporter Gabrielle Hays has gone in-depth on Missouri’s handling of mask mandates in schools, and Chavez has extensively covered Hurricane Ida’s impact on New Orleans and its cemeteries. The first report from the initiative appeared on NewsHour’s website in July, with the first TV report appearing in August.

Focusing on diverse communities is a priority for Aaron Foley, who joined the show in June as senior digital editor to focus on the Initiative. NewsHour reached out to Foley about how it could recruit journalists from diverse backgrounds, a topic he has been thinking about throughout his career. When he saw that NewsHour was hiring for the Communities Initiative, he jumped at the chance to join.

Foley was also interested in the NewsHour initiative because he had seen firsthand how the national news media overlooked diverse communities in his hometown of Detroit. “It’s a city that’s been maligned nationally for so long, and a lot of that is because we don’t always hear the stories from native Detroiters or folks in Dearborn,” Foley said. “All of metro Detroit is just so diverse and has so many different stories to tell.”

The Communities Initiative team wants to focus on stories about local communities that will resonate with a national audience, Foley said.

“Gentrification is near the top of the list,” Foley said. “Infrastructure, which affects all of us. People of color, marginalized communities tend to be bearing the brunt of aging infrastructure.”

“Having reporters who are deeply immersed in the communities that they’re covering only helps to enhance news coverage,” said Talesha Reynolds, senior content and special projects producer for NewsHour. “We have assembled a team that deeply immerses each one of them individually, and so they can bring stories to us with a level of depth that you’re not always going to be able to get in other places.”

“We’re thrilled to be hiring this number of new reporters,” said NewsHour EP Sara Just. “It’s unusual to be able to grow this way so quickly, but we’re really grateful to our supporters for making it possible.” The project is funded by PBS, the Craig Newmark Philanthropies, the Gates Foundation and the 26North Foundation.

NewsHour’s push to focus on underserved communities comes at a crossroads for local news. A recent study conducted by the University of North Carolina found that around 1,300 communities in the United States have no source of local news. Local newspapers have curtailed coverage to cut costs, and rural and suburban communities have been hit the hardest as traditional news media have struggled to adapt to digital platforms.

“We in no way see this as an alternative for local communities to have coverage of their towns and cities … but what we’re trying to do with this initiative was take those local stories, and to really raise to the national level conversations that may only be happening at the local level,” Just said.

Viewers have taken note of the on-the-scenes coverage.

Cities under consideration for the next Communities Initiative reporters include San Antonio; Oklahoma City; Tulsa, Okla.; and Birmingham, Ala.