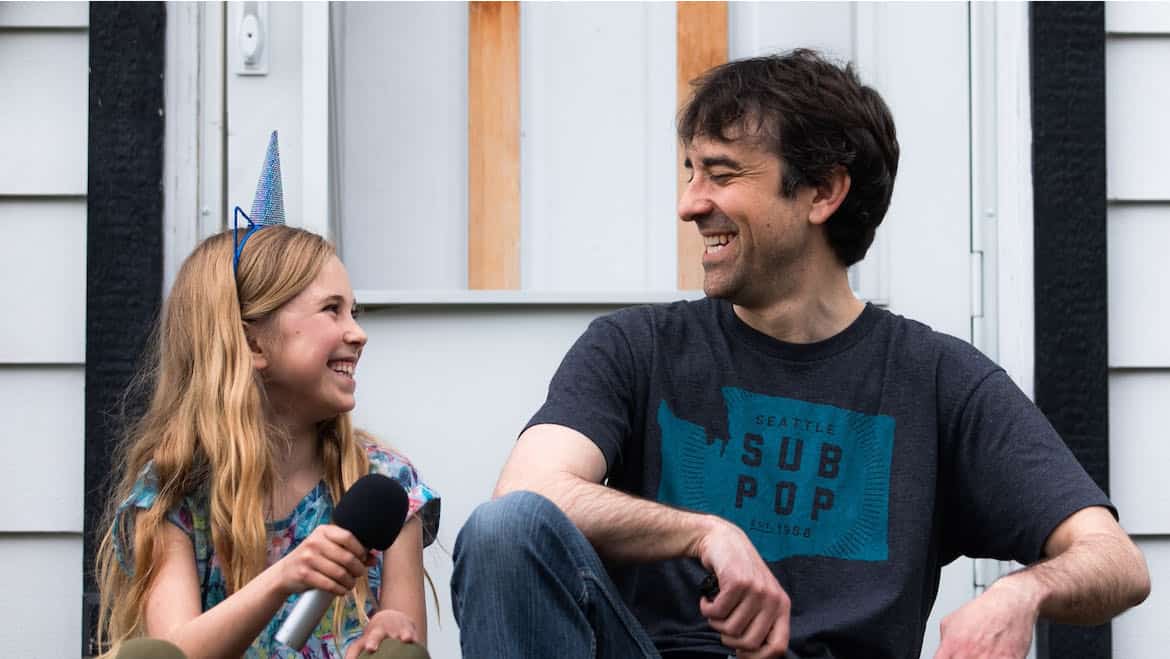 How many people fit a socially-distanced six feet apart in the state of Montana?

Fidgeting is good for you?!

Our parent-child podcast and public radio show You Must Know Everything answers these and other questions in weekly 10-minute episodes. In every show, we trade off sharing everything the other needs to know to get through life.

Two months after debuting last spring, early in the pandemic, full You Must Know Everything episodes started airing select Saturday mornings and weekday afternoons on Montana Public Radio, whose hosts have also invited us into the studio in person. Since then, we’ve been featured by Headline News, CNN, NPR’s Morning Edition and the New York Times.

Our most exciting opportunity yet came earlier this year when we began working with far-flung collaborators to turn You Must Know Everything into a series of animated shorts for PBS stations across the country.

The motivation for our radio-to-animation transformation was both internal and external.

On our end, we wanted to reach new audiences with our content. You Must Know Everything episodes are empathy and curiosity engines. Through our example, both kids and parents learn to explore, appreciate and share their feelings and insights. While we already have more than 30,000 monthly podcast downloads and reach a public radio audience of approximately 5,000 households a week, wherever there was brainy, heart-centered family programming, we wanted to be there, too.

A friend and YouTube producer, Caitlin Hofmeister, suggested that animation would be a natural format for our show, which parents and children enjoy together.

We could picture what an animated You Must Know Everything might look like in our mind’s eye. We could even produce sample scripts based on show transcripts and make a pitch document explaining our structure and comparable children’s TV series, from the emotional intelligence and relationship modeling of Daniel Tiger’s Neighborhood to the quirky, all-in scientific exploration of The Magic School Bus. These materials were strong enough to attract the interest of Marc Danon, a veteran producer, who loved our concept of kids teaching adults as much as vice versa.

Going from inspiration to actual artwork, much less full-length animations, required a much bigger team. And during the pandemic it meant doing everything through remote work and digital collaboration tools.

Simeon Mills, a professor in the design program at Eastern Washington University and friend of Jeremy’s, shared our TV pitch with a colleague who taught animation, Ginelle Hustrulid. Would her students be interested in trying to bring the show audio and sample scripts to life on screen?

Makenzie also met separately with us via Zoom, producing live sample sketches to illustrate both us and our show ideas. With these, we could literally see ourselves as cartoons for the first time.

So could Ginelle’s students. In every podcast and radio episode of You Must Know Everything, one of us shares a personal theory or life lesson. Then we read and discuss a short poem. For the final segment, we research and answer a “vexing question” sent in by a listener. During winter quarter 2021, the EWU students worked individually or in small groups, each animating a theory, poem and vexing question. We worked with Marc, Ginelle and Makenzie to select their assignments.

All the students had the same source material of our original podcast audio and Makenzie’s art — by now, dozens if not hundreds of her original illustrations of a wide range of subjects, from Dolly Parton to scrambled eggs.

They all produced completely different animations. One group went big on sound effects, for example. Another did the entire project in 3D.

It was fascinating to see how many different decisions, big and small, went into each second — or 24 still frames — of animation.

Ray singled out the last segment of our show, when we answer a listener-submitted “vexing question,” as the easiest to condense.

If we produced 30-second vexing question animated shorts, Ray said, Montana PBS could air them as interstitial segments between both kids and general audience programs. And they could make the entire series available to other PBS stations via PBS Station Exchange.

Now it was like we were the ones being pitched our own concept. But it meant that our entire team had to make it new — again.

Everyone seized the opportunity. First, we combed our library of close to 100 previous podcast and public radio episodes, identifying a diverse set of questions to animate. Then we painstakingly cut each audio segment down to 25 seconds or less — enough time for a short title sequence and setup, too.

With each successive draft, Marc and Ginelle joined both of us to pepper in a steady stream of edit suggestions.

By the end, Ginelle reported, her students had spent so many hours on the project they were hearing our voices in their sleep.

Artists often say constraint breeds innovation. To us, the You Must Know Everything animated shorts proved it.

Boiling everything down to the tightest, most educational and entertaining half-minute possible made every millisecond of the original material better.

We proudly carried the final product on a USB drive to the Broadcast Media Center at the University of Montana to screen them for Sam and Ray in person. Watching other people watch our team’s work live for the first time — and hearing Ray’s hearty belly laugh at the end of each punchline — was one of the most satisfying ways imaginable to cap a creative marathon.

The You Must Know Everything animated shorts began airing July 31 on Montana PBS, with subsequent pickup by Spokane PBS. The shorts are now available to PBS stations nationwide via PBS Station Exchange.

If all goes well, this is just the beginning of our animated adventures. Either way, we’ve already learned a lot about audio, animation and ourselves.

These are our five top takeaways for adapting audio content to the screen or translating existing work to a new format:

1. Start where you are

Creating a pitch document helps get potential producers behind you. In a cover letter plus one to five pages, explain your show concept, target audience and source material. Compare your idea with specific elements of the TV series that you see as similar, describe your professional experience and explain why the project will be a hit. Include press clippings and sample scripts if you have them.

Brainstorming with one friend gave us the idea to animate our show. Talking to another connected us with actual animators. Soon, our homegrown two-person father-daughter production had become a 20-person team collaborating across the country.

This wasn’t a work-for-hire production. Makenzie received a small stipend from EWU for her illustrations. Makaela and Vlad, the lead EWU students on the project, received gift certificates. Everyone else worked for free.

Each person brought fresh ideas to the project that we never would have thought of ourselves. Every edit round showed everyone additional ways to improve. And all involved expressed genuine gratitude for the opportunity to foster empathy and curiosity in kids and parents alike.

4. Go back to your roots

Montana Public Radio has been our biggest institutional supporter. They air the podcast, and their feedback opened up conversations with colleagues at Montana PBS. Their encouragement and support then spurred the push for the 30-second animations now available to air on PBS stations nationwide.

5. Hurry up and wait

New online tools like Zoom and Milanote let individuals across the country and around the world gather and create together at a moment’s notice. At its fastest pace, our project seemed to have someone different pushing it forward every hour, day and night. That said, larger institutions like a university or public television station necessarily operate on preset monthly, yearly or even multiyear schedules. Be ready to pause when your partners do. Use the time off to regroup, strategize or simply take a break.

What happens next for us depends as much on other people as on ourselves.

We hope many more public television stations will air the You Must Know Everything animated shorts and that we can create more and longer episodes.

Regardless, we’re thrilled to have become cartoon characters and immensely grateful to all our friends, fans, collaborators and partners for joining the journey with us.

Rasa Smith is a fifth grader and avid reader, writer, artist, crafter, athlete and explorer. Her father Jeremy Smith is a freelance journalist and the author of three narrative nonfiction books about local food, global health and hacking. Rasa and Jeremy are co-hosts and co-creators of the podcast and public radio show You Must Know Everything. They live in Missoula, Mont.