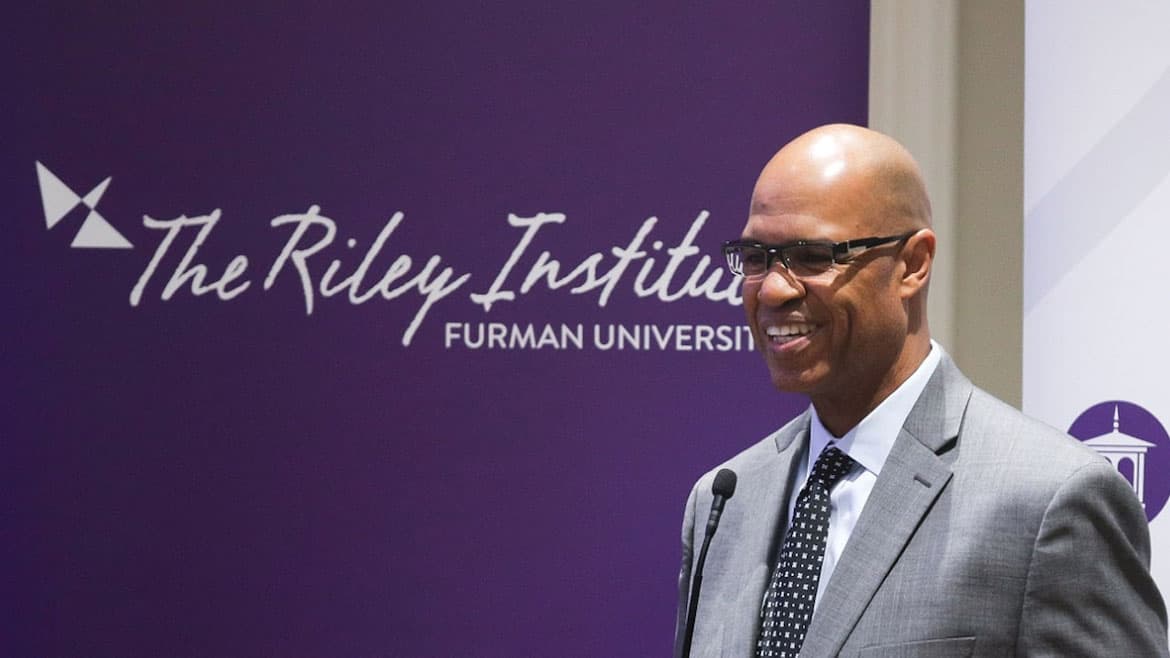 Juan Johnson, a senior fellow with the Riley Institute and facilitator of the PMDLI, teaches an in-person class.

From May 24 to July 28, 31 pubmedia leaders from across the country participated virtually in the debut of the Public Media Diversity Leaders Initiative, offered by SCETV and Furman University’s Riley Institute. A second cohort of leaders will take part in the program Sept. 9 to Dec. 9.

Led by Juan Johnson, a facilitator and senior fellow with the Riley Institute, the PMDLI comprises four six-hour days of sessions and a final three-hour meeting. It uses audiovisual tools and scenario analysis exercises combined with small-group breakouts.

Participants in the inaugural group say that they benefited from hearing colleagues share their views on DEI priorities and finished the sessions with new ideas for moving ahead with diversity efforts at their stations. For Debbie Hamlett, chief strategy officer at Nebraska Public Media, the format fostered “meaningful, deep discussions.”

“We formed bonds with each other and have been able to use each other as sounding boards,” she said.

The PMDLI grew out of the South Carolina Diversity Leaders Initiative, also offered by the Riley Institute. Since its founding in 2003, the program has had 2,300 graduates across the state.

The SCDLI was created “as a way to bring together leaders of all backgrounds across the state of South Carolina and from all professional sectors … and shape their thinking about how they could leverage our differences and leverage diversity to create positive change in South Carolina,” said Donald Gordon, executive director of the Riley Institute.

Among the SCDLI’s graduates is Anthony Padgett, CEO of SCETV, who participated in the program in the spring of 2019. The experience “gave me a different perspective about the motivation I needed to have in this area that I didn’t know I needed beforehand,” Padgett said.

After his time in the program, Padgett discussed the initiative with Adrienne Fairwell, formerly assistant GM at SCETV and now GM at Arizona PBS. Farewell had also been through the SCDLI. They asked, “‘How can we make that available to people in our industry, in the business that we work in?’” Padgett said. “Because we’d seen what a benefit it had for us. How can we help others get to the next level in our industry?”

That led to the creation of the pubmedia-focused version of the program. “Leaders in public media are having to pay attention to increased expectations set by stakeholders, by employees, by audiences, all of them wanting to establish diversity, equity and inclusion as core values,” said Gordon of the Riley Institute. “At the same time, they really are also on the front lines of national conversations about race and racism. We’re trying to give public media leaders the frameworks and the tools that they need to further live out the industry’s principles and the values that are held by most public media folks.”

With its focus on a particular industry, Padgett said, the PMDLI allowed participants in its first class to find common ground more quickly. “Given our shared experiences and backgrounds … there were some connections there already,” he said. “There was almost an instantaneous opening up. … I feel like we jumped three days ahead on the first day because we all knew we were here to work, and we were determined to get work done and make some progress.”

A call to empower employees

Amy Burkett, GM of PBS Charlotte in North Carolina, said the PMDLI was “one of the best professional development projects I have ever had the opportunity to participate in.”

“You could see just the energy and the vulnerability and people opening up about personal stories … just the empathy that everyone had for each other,” Burkett said. In the breakout groups, she said, “getting to know my colleagues on a deeper level, talking about specific issues was really just extraordinary.”

The initiative’s facilitator emphasized the need for implicit bias training within organizations, so Burkett and PBS Charlotte are working with the station’s licensee, Central Piedmont Community College, to secure training for employees. “That’s the first action step that we talked about immediately, and we’re looking forward to being able to make that available for everyone,” she said.

For Jaime Jiménez, the PMDLI spurred him to focus on how to lead his team at KLCS in Los Angeles, where he is GM. “What I really came away with in terms of the practice that I want to implement is giving more responsibility to people, empowering them — not more work, but the ability to make decisions,” he said.

“It’s been an interesting exercise in terms of not setting limitations on ourselves, but really becoming creative, a lot more bold, a lot more resourceful, and empowering people so that they know they can take ownership of these initiatives and have the station embrace this and move forward,” Jiménez said.

Graduates from the inaugural PMDLI class are nominating colleagues to join the session that will start next month. Participants pay $1,500 to enroll.

While the initiative is currently focused on leaders of pubmedia organizations, future sessions could open up to a broader range of employees, said SCETV’s Padgett.

“There is a huge desire for leadership to start pushing this down throughout organizations, especially if they do have a diversity officer of sorts, but also through their HR departments,” Padgett said. “So we’ve actually been having some conversations about when we start looking at more of a broad perspective of having this class opened up to more people. … We definitely want to make sure that we consider those things as we consider the timing of the future cohorts.”