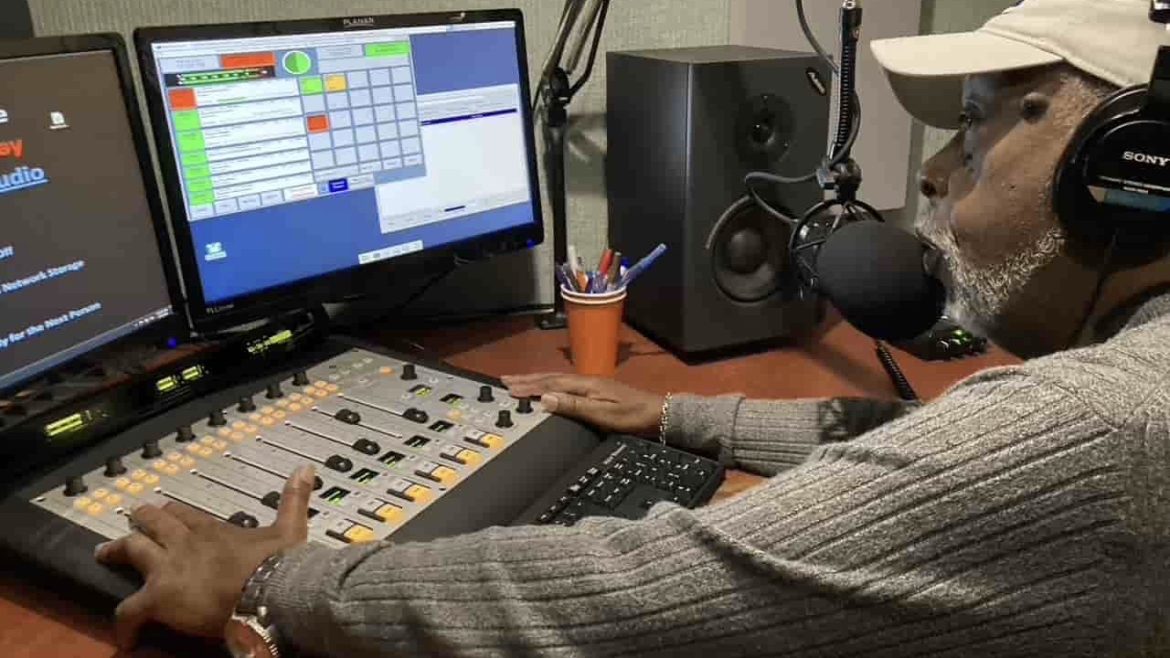 Jerry Carter, host of "Traffic Jam Blues" on the Time Machine Radio Network, works in the WHRO studio in Norfolk.

An eastern Virginia oldies station operated by Chesapeake Public Schools for more than 60 years has transferred ownership to WHRO Public Media in Norfolk.

The station began in the 1950s as a 10-watt high-school outlet where students learned the ins and outs of broadcasting. But over the years students’ interest in gaining experience at WFOS decreased. At the time of the transfer, about eight part-time programmers worked at WFOS.

Chesapeake Public Schools spent $200,000 annually to operate WFOS but decided to stop funding it at the end of 2020. Superintendent Jared Cotton asked WHRO CEO Bert Schmidt if he would be interested in taking ownership of the station as a donation.

Adding WFOS provides an opportunity for the public broadcaster to reach an entirely new audience, Schmidt said. “There’s nothing else like it on the air,” he said.

“My quick reaction was, ‘Yeah!’ because usually people spend millions of dollars for a station,” Schmidt said. “This format is something that the market doesn’t have and that we could do really well, and still fits our brand of educational broadcasting.”

Under the transfer agreement approved by the FCC last month, WHRO paid $1 for the purchase, Schmidt said.

WHRO Public Media is a dual licensee that provides multiple public television and radio services to the Hampton Roads region of southeastern Virginia. Its FM radio channels include 89.5 WHRV, which broadcasts NPR News and jazz programming, and 90.3 WHRO, an all-classical station.

Before the transfer, WFOS had been broadcasting at 150 watts for about five years because its transmitter, in use since the early 1990s, could no longer operate at full power. Its signal covered most, but not all, of Chesapeake, an independent city south of Norfolk.

WHRO began managing the station in April, when the license transfer agreement was still pending with the FCC. Its engineers installed a new 15,000-watt transmitter for WFOS immediately after taking over operations. They also deployed a repeater station that WHRO already owned to help fill gaps in WFOS’ coverage in Virginia Beach.

“In 2007, people could pick up the signal from 78 miles away,” Carter said. “Now they can’t hear you five miles away. You wonder why you’re doing what it is that you’re doing. But for the love of broadcast, the whole staff stayed there.”

With the engineering upgrades, WFOS’ coverage area extends south beyond Chesapeake into parts of northeastern North Carolina, with a potential audience of around 700,000 people.

Radio that connects with people

Despite its limited coverage area when broadcasting at 150 watts, WFOS had built an “extremely passionate” following, said Chuck Doud, WHRO director of radio program and audience strategy. He pointed to the number of listeners who call in during Larry Williams’ beach music show.

“It is insane how many people call — it’s nonstop,” Doud said. “I haven’t seen that since the ‘90s in radio, where the phones are always ringing. These folks just want his time, to talk with him and to put in a request.”

“It’s exciting to watch because for me, that’s what radio was. It was connecting with people,” Doud said.

With the FCC’s approval of the transfer, Doud began making changes to WFOS’ programming and staffing. Due to budget constraints, Carter and Williams are the only two DJs who are producing live broadcasts for Time Machine Radio Network. All the other programmers on staff were let go. Paul Shugrue, host of Out of the Box, a WHRV show featuring new music, will soon take on the role of music coordinator.

For now, WFOS is drawing on music from an extensive library to run on automation during all other time slots, Doud said. He hopes to add much more live programming to the schedule once the station is fully set up.

“We’re going to have great music,” Doud said. “You know who else has great music? Siri and Pandora and Spotify.” He sees knowledgeable music curators and programmers as essential for listeners to build relationships with the station and support it financially.

Under the school district’s ownership, WFOS didn’t have a membership program or sell underwriting. WHRO is developing plans to introduce on-air membership campaigns and sponsorship.

“That’s always a challenge to your station — going from a listener to a lover to an investor of the station,” Schmidt said. “Our audience is going to be new to that next leap of becoming a member.”

The business plan developed for the Time Machine Radio Network projects that the station will begin generating returns within five years, he said.

Correction: An earlier version of this story incorrectly described Chesapeake, Va., as a small city, but it is the second–most-populated city in the Commonwealth of Virginia. With a land area of 351 square miles, it is also one of the largest cities in Virginia and the U.S.