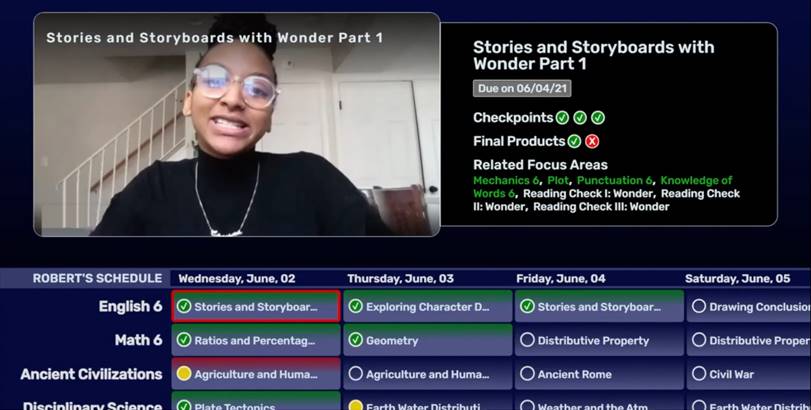 A prototype of a Howard University Middle School of Math and Science online learning system that will use the data capacity of WHUT's ATSC 3.0 signal.

Like other prototype ATSC 3.0 systems in markets such as Phoenix and Detroit, the “Howard University NEXTGEN TV Broadcast Collaborative” will be managed by Pearl TV, a partnership of nine major commercial broadcast TV owners. In those markets, public TV stations — Arizona PBS in Phoenix, for example — have been only passive participants, supplying programming to ATSC 3.0 transmission systems hosted and managed by commercial stations.

In Washington, Howard-owned WHUT will play a bigger role, marking the first time a public station has been at the center of a marketwide ATSC 3.0 partnership. Its broadcast signal will get new equipment and a power boost to serve as the ATSC 3.0 host station, carrying not only WHUT’s own programming but also ATSC 3.0 streams from four major commercial stations. One of those, Sinclair-owned ABC affiliate WJLA, will share its ATSC 1.0 spectrum with WHUT, carrying WHUT’s main PBS and PBS Kids services to viewers with the older generation of receivers.

Washington was one of the original demonstration markets for the original ATSC 1.0 digital TV system a generation ago. This time, with regulators and lawmakers watching closely, the Howard-based collaborative is designed to show off more than just the new technology of ATSC 3.0. As excited as the participants are about the sharper pictures, better sound, more robust signal coverage and improved datacasting capacity of the new system, they’re even more enthusiastic about the opportunities presented by a cross-disciplinary partnership with Howard that will extend far beyond using WHUT’s spectrum.

“We’re looking to educate the next generation of broadcast leaders,” said NAB CTO Sam Matheny. For NAB, which is finally occupying the new Washington headquarters it had moved to just as the pandemic began last year, that means bringing Howard students in as active participants in the engineering lab on the fifth floor of the new facility.

As the broadcast engineering community continues to age, Matheny says the lab, and the broader partnership, have a big goal: “How are we going to be able to build the next generation of TV technologists and producers and journalists? To be able to partner with Howard and leverage that lab as an experimental space for their students to be able to come in, with expertise provided by NAB and the industry, and then put that back on the air in a real broadcast using WHUT — we think that is really, really exciting.”

At Howard’s end, WHUT Acting GM Sean Plater says the station has already been engaged in datacasting efforts that promise to be enhanced by ATSC 3.0. During the pandemic, WHUT worked closely with the Howard University Middle School of Math and Science. Many of its students live in parts of Washington that suffer from poor broadband access, an issue that became even more dire during the pandemic as students were forced to try to learn from home. WHUT worked with the middle school to convert its online learning system to work through ATSC 3.0, using the data capacity of the new system to supplement inadequate or nonexistent broadband.

“It’s almost like a television guide where [students] can scroll through the TV and it’s pulling up their lesson, it’s pulling up the video, and they complete all the exercises they would normally do using the internet,” Plater said. “When they’re done … it gives you a QR code, and you take a picture of the QR code with your phone and send it back to the teacher.”

While those young Howard-affiliated students might be using the WHUT signal to get their lessons, students at the university’s school of communications will get a graduate-level lesson in how all that technology comes together. As the experiment came together in the spring of 2021, Howard worked with the NAB lab and industry leaders to create a series of seminars, dubbed “ATSC 3.0 101, 102 and 103.”

“Students at Howard were able to learn about the technology and what it means, and how it impacts their potential for jobs and internships,” Plater said. “To my knowledge, it’s the only place like that in the country, where students have an opportunity to go through a class learning about NextGen.”

In addition to NAB staffers, the seminars included top technology leaders from CBS, NBC, Sony and other major industry players.

“It was an opportunity that maybe they don’t even know how great it was for them,” said Gracie Lawson-Borders, dean of Howard’s school of communication. “We need to be a part of preparing these people who need to step into so many of these roles where we’ll need them as we move forward.”

Having a historically Black university such as Howard as a partner was especially important, Matheny said, to move forward on NAB’s goal of promoting educational equity. Howard graduate Kelly Williams already works as an engineer in the NAB laboratory, while another Howard student who took part in the spring ATSC seminar is now working with Pearl TV as an intern to help refine the remote-learning application for WHUT’s ATSC 3.0 launch.

While Pearl declined to disclose the exact cost and funding breakdown for the Washington launch, it involved either “in-kind or financial donations” from all of the broadcasters, technology companies and associations involved in the collaborative, said Managing Director Anne Schelle.

Work is already underway on the needed upgrades to WHUT’s transmission plant, including a more powerful transmitter, with the goal of signing on the ATSC 3.0 signal for Washington by August.

While the pace of ATSC 3.0 conversions is accelerating, including a recent launch nearby in Baltimore, APTS Executive VP Lonna Thompson hopes WHUT’s role in the Washington collaboration will provide a useful learning experience for the majority of public TV stations that have yet to make a commitment to the new broadcast system.

“I’d like our stations to look at what Howard University, WHUT, NAB and Pearl are doing here, and pay close attention,” Thompson said. “These lessons learned and these new applications and services that are created here will be so instructive for all of our stations, and our communities will benefit from it.”

Unlike the transition from analog to ATSC 1.0 two decades ago, there’s no federal funding to help stations convert to the new system. Thompson also hopes the collaboration and demonstration projects in the shadow of the Capitol will present an opportunity to remind lawmakers of the value of including public TV in future federal infrastructure funding.

Whether or not that goal materializes, Thompson said APTS sees tremendous value to the system’s future in the educational and professional development aspects of the partnership with WHUT and Howard, especially when it comes to recruiting new talent into the public TV industry.

“This is a direct way that young people at the university are seeing, ‘We’re broadcasting, we’re pretty cool,’” she said. “To reach these young, smart, creative students with hands-on experience about what Next Gen TV looks like is really so tremendously exciting and so good for all of our industry.”