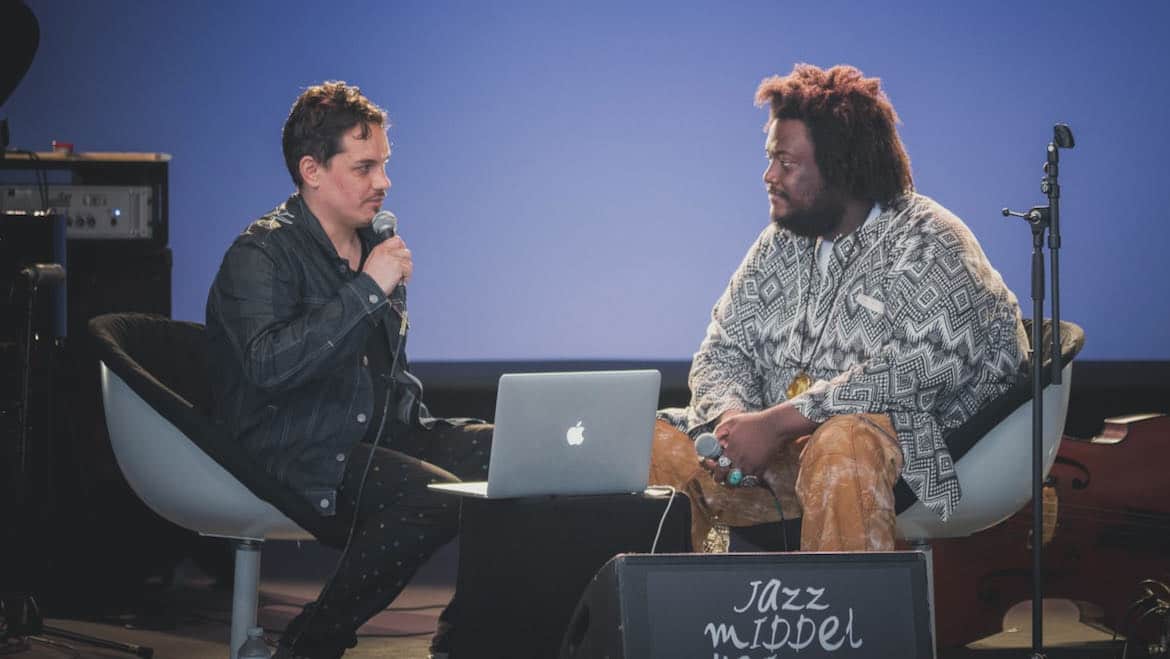 Simon Rentner records an episode of WBGO's "The Checkout" with saxophonist Kamasi Washington at the Jazz Middelheim Music Festival in 2018.

New Jersey’s WBGO is expanding its podcast productions by offering new series about jazz along with shows featuring a broader range of content under the label of WBGO Studios.

“One of the things that WBGO Studios represents is a recognition that [podcasting] is a really valuable space and that this is an area that we really can no longer afford to think of as marginal or supplemental,” said Nate Chinen, director of editorial content and host of WBGO’s Jazz United, a podcast that launched last year. “It deserves to be seen as part of the main offering of this media organization.”

The unveiling of WBGO Studios coincided with the May 19 release of the station’s newest project, a four-part series about racial economic inequality titled The Great Wealth Divide.

The series is hosted by Dale Favors, a managing partner at professional services firm Adaptive Growth Leadership, and produced by filmmaker and film critic Mike Sargent. It features conversations with experts from various fields about challenges and solutions in addressing the wealth gap between white communities and Black and Latinx communities.

The Great Wealth Divide was in the works before WBGO leaders decided to consolidate their podcasting strategy under WBGO Studios, according to CEO Steve Williams. A sponsorship deal with J.P. Morgan Chase boosted marketing of the series and helped create “quite a buzz” as the first release from WBGO Studios, he said.

“What we understand about the relationship is that [Chase was] very much interested in WBGO’s connection to communities of color, and they felt that WBGO would be a terrific conduit in service to their stated goals to establish a stronger link, if you will, to those communities,” Williams said.

He saw the sponsorship as “an opportunity for us … to establish new ground in the area of podcasting” and to signal that WBGO had entered the world of podcasting as a serious player through its association “with such a high-profile corporation.”

Williams described the relationship with J.P. Morgan Chase as “extremely open and supportive” and said the company has made no attempts to influence the editorial content. Sponsorship messages for the podcast are prominent on all platforms and immediately apparent to audiences, Chinen said.

WBGO will continue to look for sponsorships like this one, as well as opportunities for underwriting, to fund its podcast projects, Williams said. By creating WBGO Studios, Williams aims to scale up in a way that provides more visibility to sponsors, whose investments in podcasts have been a key source of revenue growth for NPR and some public radio stations.

Under the WBGO Studios brand, an underwriter is “not just sponsoring one podcast, you’re sponsoring four,” Williams said. “The scale at which we produce podcasts, with the aggregation of that, is much more attractive to sponsors and underwriters simply because there’s just more real estate in which to operate.”

‘We want to be open to everything’

Clearing music rights for song clips adds costs and extends the production timeline for music podcasts. Chinen described the process of weaving music into a podcast’s narrative as “an art” that requires significant expertise. But when it’s done right, music clips allow for deeper storytelling than can be achieved in other formats, he said.

“I think that the jazz community is quite underserved in the podcasting space,” Chinen said.  “There are a few really great interview podcasts in jazz, but they tend to be sort of plug-and-play — minimal editing, not a lot of audio production. So I see this as an area of great opportunity.”

The launch of WBGO Studios aims to build on the success of these programs, facilitating new podcast content and allowing WBGO to introduce its brand to wider audiences.

The Great Wealth Divide exemplifies another of Williams’ key goals for WBGO Studios — broadening the content focus of the station’s podcasts beyond its signature expertise in jazz.

“We don’t want to box ourselves into any one particular thing,” Williams said. “We want to be open to everything that’s out there. The only qualification is that it be good storytelling.”

For now, a small team of WBGO staffers are working on the podcast strategy. Williams, Chinen, Rentner and Doyle, among others, meet weekly to discuss their plans and progress.

“These are people who are already on staff, so we’ve just added another component to their responsibility to the organization,” Williams said. “And because there’s so much buy-in about this, there’s excitement about this effort. Nobody has said, ‘Well, you’ve got to pay me more to do this right now.’”

WBGO may also contract with individuals to work on particular podcast projects, seeking to hire experts with experience in specific areas of podcast production, Williams said. He does expect WBGO Studios to eventually present original content from outside podcast creators in addition to those created in-house.

WBGO staffers have been discussing the need to consolidate the station’s podcasting efforts for several years, but leadership turmoil prevented them from moving forward, Chinen said.

Williams’ arrival as CEO early this year and the success of Jazz United injected energy into plans to create more podcasts, he said. The concept for WBGO Studios began to solidify this spring, not long before the official launch in mid-May.

“That quick turnaround is a reflection of the urgency that we feel. … This feels like a really vital step for us in this current media landscape,” Chinen said. The alternative was to “spend months and months workshopping and doing all of the sort of behind-the-scenes work to staff up,” he said, “and then we don’t announce until we have nine podcasts to show for it.”

“But … in this particular climate and with everything that we’ve been contending with, with the pandemic, it’s just like we don’t have the luxury to wait for the conditions to be perfect,” Chinen said.