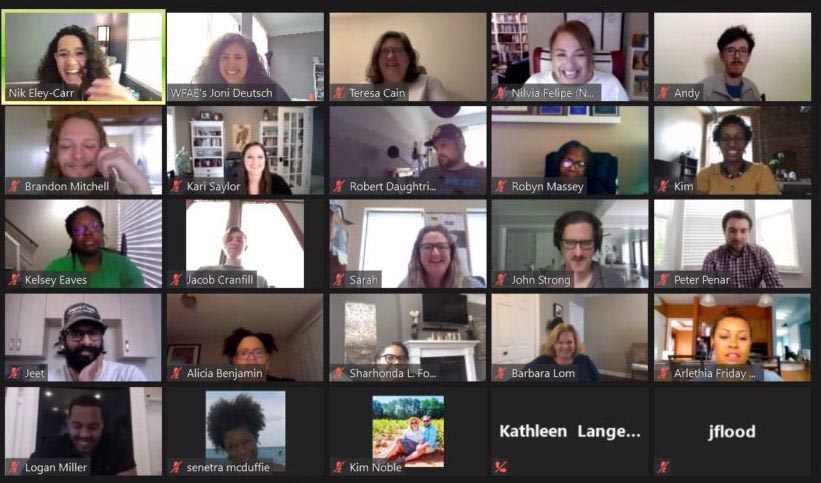 Students participate in WFAE’s 2020 Queen City PodQuest Academy, a course designed to help them develop their own podcasts.

The American Journalism Project announced Wednesday that Louisville Public Media and North Carolina’s WFAE will receive three-year grants that will primarily support each organization’s efforts to increase and diversify its revenue streams, providing more capital to reinvest back into journalism.

According to VP of Portfolio Support Michelle Srbinovich, the organization originally decided not to fund public media organizations because it wanted to focus on building out development and business teams of smaller nonprofits that didn’t have the kind of institutional support public media receives.

“We were looking for organizations who, one, already had a track record of stepping up and providing local news to their community,” Srbinovich said. “We wanted to make sure that the organizations that we selected definitely saw a distinct role for themselves, that they were stepping in to fill a role that the local papers were not able to play.”

WFAE CCO Ju-Don Marshall said that when she joined the organization four years ago, she made the needs of the Charlotte community a priority.

WFAE has since started multiple initiatives focused on involving the community in its reporting, including community surveys, a podcast submission contest and a free summer program designed to help students realize ideas for podcasts.

“Before we start some of our big projects, we survey the community to make sure that we understand their needs and information needs before we go down into the rabbit hole of planning and thinking about all the things we think the community should know,” Marshall said. “It’s really important for us to know and understand exactly what the community needs from us and to not take that for granted.”

The $590,000 grant will help WFAE hire a chief revenue officer who will develop new revenue streams outside of traditional fundraising strategies, Marshall said.

“I think those are ways you build that trust that eventually leads to people making a personal investment in what you did,” George said.

Srbinovich of AJP said that on top of being a primary source of reporting for the community, selected grantees were especially collaborative, sharing resources and uplifting the local media ecosystem.

George said that LPM is an organization that does just that by finding and filling gaps in local news caused by the decline of newsrooms across the nation.

“Here in Louisville, we see ourselves as part of the broader news ecosystem, so we don’t seek to necessarily replace what any other local news outlets are doing,” George said. “For example, in our newsroom expansion, we are creating a new city team that’s going to be focused on reporting on issues of city policy and politics. … The idea of the team is to have sort of this reengaged, reenergized focus on the core issues driving the city forward.”

AJP’s $655,000 grant to LPM will also go towards increasing revenue, which George said will involve creating three new revenue-generating positions at the organization. One will focus on increasing major giving and another on foundational giving. The third will manage a digital membership program that LPM recently started.

In addition to the grants, AJP also provides organizations with nonfinancial support, Srbinovich said. For example, grantees are assigned to each other in pairs, a partnership that creates space for them to share ideas and successful revenue-raising strategies.

“It’s a really close working relationship, and it helps us not only support them and get the most out of their experience with the AJP … but also so we can learn from this and start to share more with the broader field about what success can look like, decisions organizations need to make and the different models for fundraising,” Srbinovich said.