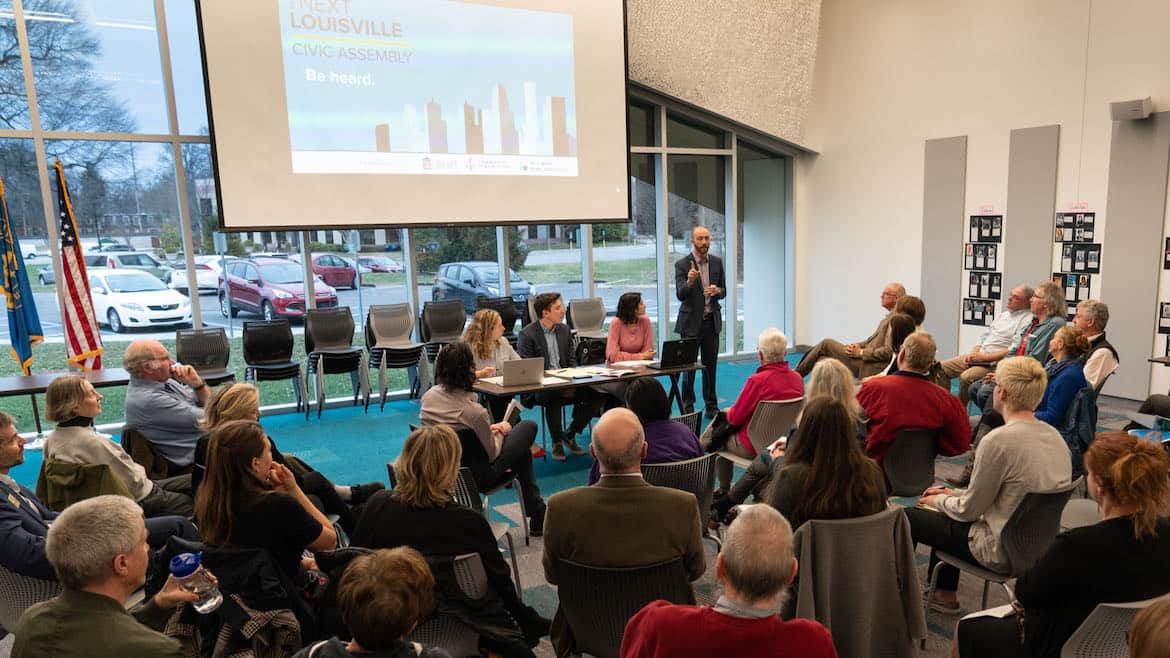 WFPL News in Louisville, Ky., is nearly doubling its staff of local journalists as it creates a four-person city team to report on civic issues.

Louisville Public Media, which operates WFPL, has raised over $1 million from six donors to support its three-year expansion plan, which will add beats on health, breaking news, race and equity, and city government and politics.

When the organization reaches its fundraising campaign goal of $1.5 million, it plans to add a fifth reporter to cover business and economic issues, as well as a VP of content to oversee all newsgathering and audience development.

The decision to expand the news team stems partially from an experimental virtual town hall and series of in-person forums that put the station’s audience in the driver’s seat to share what kind of news stories they want to hear.

The “Civic Assembly” project was a partnership between WFPL and Columbia University’s American Assembly, a nonprofit organization founded by Dwight D. Eisenhower to foster public conversation on social and political problems.

For three weeks in February 2020, WFPL’s Civic Assembly asked online participants a simple question: “What do you believe should change in Louisville to make it a better place to live, work and spend time?”

This prompt resulted in nearly 900 statements, ranging from “We need more trees. Desperately” to “I believe having armed school resource offices in Louisville schools will make our schools safer.”

Nearly 1,400 Louisvillians participated by submitting their own answers or simply responding to other people’s statements with a vote of agree, disagree or pass.

It was an innovative way for the news organization to fulfill its mission of keeping listeners informed and engaged, according to LPM President Stephen George.

“We wanted to take the temperature of the public on the issues that they care about,” George said. “I thought the ability for people to talk about really tough civic issues in a public way and see where they agree and disagree might help gain some perspective on the big issues that we face in this community.”

Some participants provided reactions to wider state or national issues. For example, George said agreement around Louisville’s need to address climate change stood out. However, the vast majority of responses referenced local issues, such as traffic, development, zoning, schools and municipal governance, according to Kirsten Pfalzgraf, LPM director of engagement.

“It exists now as a sort of time capsule of what our community was thinking about, and wrestling with, right before COVID-19 became the focus of our world, and before calls for racial justice erupted in our city after the police killing of Breonna Taylor,” Pfalzgraf said.

She added that feedback from the virtual town hall provided a wealth of story ideas but also helped reinforce WFPL’s need for additional reporters to pursue race and equity, city government and business beats.

The station had scheduled a series of community conversations in March 2020 at libraries across Louisville, focused on five common themes that emerged from the virtual town hall: climate change, policing, homelessness, transportation and education. However, WFPL held only one event before COVID-19’s spread across the globe cut short this second, in-person phase of its Civic Assembly project.

Erica Peterson, WFPL’s former director of news and programming, said the discussion they held on climate change was purposefully designed not as a panel of experts but with three moderators encouraging the 50-person audience to share perspectives. And contrary to many radio journalists’ first instinct, they left the microphones at home.

“This is not off the record, but we are not recording it. We want people to be able to feel like they can speak freely,” Peterson said.

“The events are really not necessarily a springboard for a story, per se,” Peterson said. “The events are for story-seeding — for getting sources that are not the usual sources on topics.”

That falls right in line with another core goal of the Civic Assembly project: reaching people outside WFPL’s traditional audience. Pfalzgraf said LPM created a list of over 100 contacts to help promote the virtual town hall and community events, adding that those relationships will be helpful in promoting future community-wide projects.

“Civic Assembly was an important part of a broader institutional effort to put our audience at the forefront of everything we do, and we’re continuing to engage our community and solicit feedback,” Pfalzgraf said.

One way to achieve that is through a public survey WFPL is currently promoting as a follow-up to the Civic Assembly initiative. Another is by ensuring diversity in the journalists they choose to fill the new roles in its newsroom.

Louisville Public Media is located in Jefferson County, Ky., which is about 67% white, but white employees make up 83% of the organization, according to statistics published in Louisville Public Media’s December 2020 report on diversity, equity and inclusion. The report lays out the station’s goal of having its staff reflect its county demographics by 2024.

“It’s imperative that we embrace diversity in our storytelling and news decisions. We have committed to hiring more Black journalists and other journalists of color, which we will do in this expansion,” George wrote in a letter posted to WFPL’s website.

Rebecca Feldhaus Adams, who recently stepped into her role as news director, will lead the hiring process. She intends to carry on the ethos of Civic Assembly by ensuring her reporters and editors’ daily processes reflect the audiences they serve, and also the audiences they don’t yet serve.

“Who are the people who really need to know about this [topic] because it affects their daily lives? Who doesn’t know about [W]FPL at all?” she asked. “Think about why they don’t, and then kind of reverse-engineer how we get in touch with those people.”

Feldhaus Adams hopes to have the four new reporters on their beats within a few months, led by new City Editor Amina Elahi, who has been promoted from her role of city reporter. WFPL plans for the expanded newsroom to be fully sustainable by 2024 through contributing members and local underwriting.