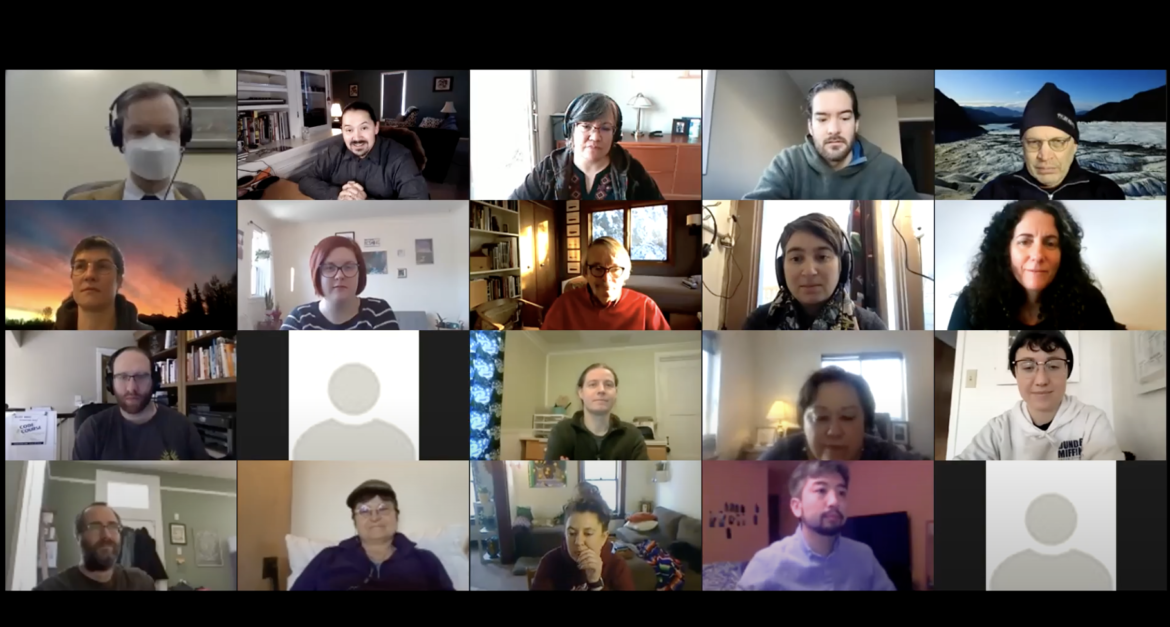 To X̱’unei Lance Twitchell, this phrase from the Native language Lingít speaks to the connection between the language and the land where the Tlingit people have historically lived. In a March 16 class for news staff, producers and managers at KTOO in Juneau, Alaska, Twitchell explained how the phrase informs his approach to teaching Lingít.

Strengthening its connection to the land and local community is a key reason that KTOO launched the series of 13 lessons with Twitchell starting Feb. 2. Even before the classes began, KTOO staffers often spoke a few words of Lingít daily on air, such as the name of a local high school. But KTOO VP and Music and Arts GM Cheryl Snyder said her lack of basic Lingít was interfering with the relationships she wanted to build with the community.

“We really have an obligation to pronounce it properly and to understand what it is we’re saying,” Snyder said.

Lingít is the language of the Tlingit people, who live in southeast Alaska, northern British Columbia and Canada’s Yukon Territory. According to Twitchell, approximately 200 people in the U.S. and Canada can speak the language at some level. Many of those speakers can only repeat memorized phrases and pronounce sounds. Only about four or five native speakers with a high level of fluency are still living.

Though few Juneau residents speak Lingít, Twitchell said promoting the language’s use on KTOO offers an opportunity to normalize use of the language in the community.

“Looking at public radio was a way to really push the boundaries of normalization so that you can hear it,” Twitchell said.

According to Snyder, conversations to create the classes began about a year ago. Funds to pay or Twitchell came from a grant from the Alaska Community Foundation.

A typical class starts with Twitchell speaking entirely in Lingít and translating into English. One of his goals is “to have them hear the language first,” he said.

Twitchell then opens up the class for discussion and questions. The lessons then follow the flow of the conversation. When teaching a class that meets only weekly, “the goal is just giving a little bit of this, little bit of that,” he said.

KTOO integrated the lessons into staffers’ workdays to make it easy for them to participate, Snyder said. “By including it in the workday, we position it as not an extra but essential part of the work that we’re doing right now to be a better, more community-connected organization,” she said.

Through the classes, KTOO is aiming for “doing a better job at reading the Lingít that we read every single day on the air, and … helping KTOO feel more like home for the Indigenous people who live in this place,” Snyder said.

The Lingít classes are part of a broader multiyear effort at KTOO to step up work around diversity and inclusion. The station has also organized training with NPR Chief Diversity Officer Keith Woods and is conducting daily source audits. It is aiming to recruit a more diverse staff, and it has begun featuring on-air “land acknowledgments” to recognize the station’s location on the ancestral homeland of two Tlingit clans.

“Our building sits on fill that was once tideland and part of what is called the Indian Village,” reads the acknowledgment, which was developed with feedback from Tlingit culture bearers. “The families of the Juneau Indian Village, like their ancestors, cherish and depend upon their immediate connection to the waterfront. KTOO is working to lift up Tlingit voices and the Tlingit language. Please excuse us for our mistakes, and gunalchéesh [thank you] for your patience as we learn.”

Snyder said that though KTOO has worked to create meaningful relationships with community members and to elevate marginalized voices, it is still a predominantly white organization.

“I’ll speak for KTOO, but I think it’s very true of many white-founded nonprofits that there’s the sense that saying that ‘We are diverse, and everybody’s welcome’ is enough,” Snyder said. “It is not enough because, unless you’re willing to do the actual work of creating and building and moving an organization’s culture together with the people that you want to include, they will always feel like outsiders.”

For Chandre Szafran, the first day on the job at KTOO included a Lingít class. Szafran, an Inupiaq Alaskan Native originally from Nome, was new to the state’s Southwest region and to public media journalism when she started at the station Feb. 16 as an arts, culture and music producer.

“It was such an amazing welcome,” Szafran said. “Native language use and Native language learning is something that’s really important and near and dear to my own heart.”

She said that KTOO’s Lingít classes showed her that the station is “genuinely dedicated to not just learning the language and using the language” but also working with “the original communities of the place that KTOO calls home.”

By offering his classes, Twitchell said, KTOO is reinforcing that “we can choose a different destiny than death for Indigenous languages and Indigenous peoples.”

“When we see entities like KTOO embrace it and make it part of their work to say, ‘Oh, actually, we have something that we can do,’ I think it leads the way for other entities to say, ‘Well, what am I doing?’” he said.