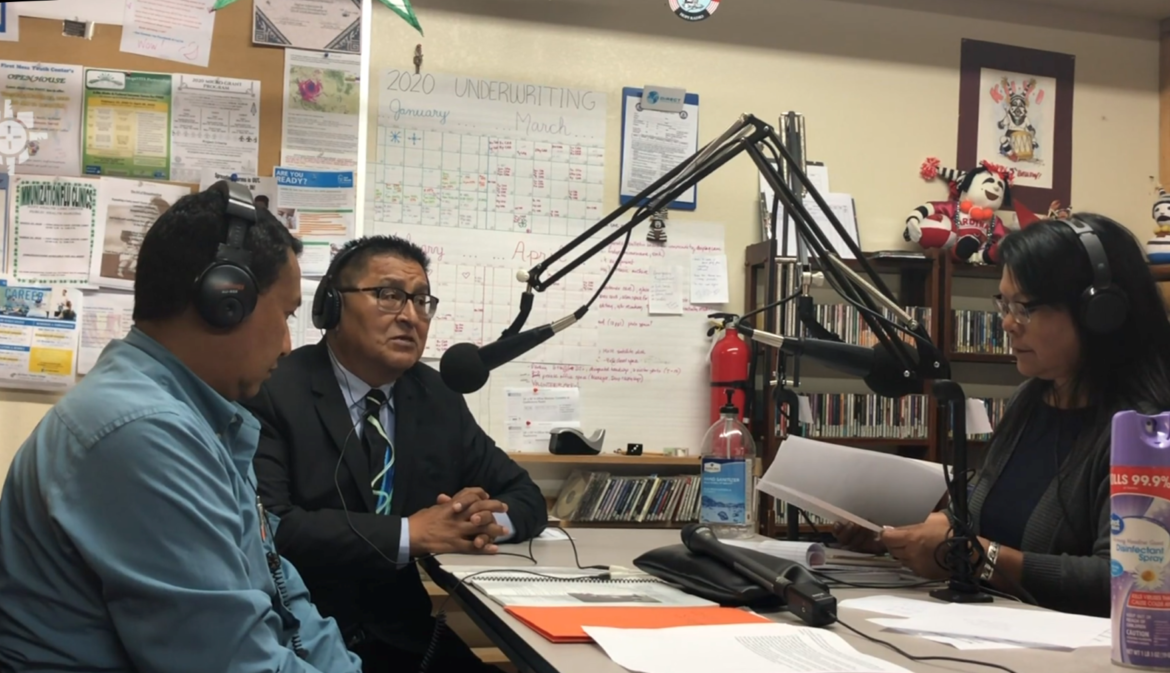 Public radio stations that serve Native American communities are striving to provide essential local news and tribal content during the COVID-19 pandemic while grappling with the limitations of underfunded health-care services and information systems.

Many parts of Indian Country lack internet access and broadband connectivity, making their public radio stations the only source of local information, said Loris Taylor, president of Native Public Media. The COVID-19 pandemic has only made this role more crucial.

“For all the little details that are hyperlocal, you can’t just go to another information source,” said Taylor.

Yet the challenges faced by Native stations make it more difficult for them to fill this vital role. The communities they serve lack access to water, Taylor said, which complicates messaging hand-washing protocols over their airwaves. In the Hopi tribal region where Taylor lives, some people have to travel over 90 minutes to a store to buy water, she said.

Tribal stations are also especially vulnerable to underwriters dropping their sponsorships due to the pandemic’s economic impact, Taylor said. Tribal areas have only a few businesses to buy underwriting, and they often field requests for charitable causes from others in the community as well.

These challenges will need to be addressed as the country recovers from the pandemic, Taylor said. “We’re going to have to figure out our communications systems and the infrastructure issues that have become more pronounced,” she said.

Native communities are also disadvantaged for receiving information about the pandemic. The National Indian Health Board found in a survey that only half of tribes reported getting updates about the outbreak from state and federal governments. Less than a fifth reported receiving resources.

According to Davis, Congress usually establishes either a hospital or a health-care facility in tribal communities as part of the federal trust responsibility. Communities such as KUYI’s that have health-care facilities instead of hospitals face severe shortages in supplies and emergency medical care. Likewise, Native media have even less access to health-care officials than other populations.

To cover the absence of directives from local health providers, KUYI shifted the focus of its program House Calls in early March. The weekly telemedicine show began to feature health-care providers discussing the coronavirus and its symptoms.

The station also got permission to simulcast tribal council meetings about the pandemic, only the third time in the last 19 years the council allowed the practice. Before social-distancing measures were in place, Davis trained tribal IT employees to run and set up broadcast equipment in the tribal council. They can now hook up the equipment to the station via Skype if emergency messages from the council need to be aired.

Davis said KUYI, like most stations, is experiencing decreases in revenue and donations. But the situation is exacerbated because the station operates in an area that is “economically depressed by design,” he said.

Some of the station’s programs have suffered, particularly content in the Hopi language. The station is now airing just one PSA in Hopi each week, down from four weekly, because elders who usually read the messages can no longer travel to the station to record.

“Our ability to broadcast in the Hopi language has been throttled,” said Davis.

The Hopi tribe is made up of 12 autonomous villages and one separate community. Davis said village leaders have been vital in providing information to the station. Many send voice memos in English and Hopi with updates that the station can broadcast.

Rates of infection differ greatly across tribes. The Navajo tribe, which surrounds the Hopi land, has one of the highest numbers of cases per 100,000 people in the country. Twenty-seven Hopi tribal members tested positive for coronavirus as of April 30.

Davis said that while each tribe is experiencing the pandemic differently, all share inherited systemic inequalities and underfunding of health-care providers. But while Native communities are forced to shoulder added historical burdens, Davis said they also have lessons from Native history to help them.

“There’s a large amount of cultural resiliency that people are drawing on,” said Davis.

Listeners step up to support news

For a station in Colorado, the pandemic has provided an opportunity to reboot its news operation. Founded by the Southern Ute Tribe, KSUT in Ignacio serves five counties in the Four Corners region of the Southwest and three distinct tribes with its two signals.

A decade ago, the station had to cut its news team of 1 1/2 full-time equivalent workers because it couldn’t afford the salaries, said Executive Director Tami Graham. But with the pandemic making local news more important than ever, she said, listeners began calling the station and asking for reporting on COVID-19 in the area.

She responded that the station wanted to but lacked the resources. So a listener donated $3,000 toward a news team. Two other donors matched the gift, for a total of $9,000.

Graham was able to hire two reporters for an eight-week commitment starting March 26. The station has received another $2,500 from listeners donating in support of the news and increasing their sustaining memberships since it expanded its coverage. After getting the initial funding, the station began airing soft pitches around its reporting to gain support. Graham said she’s also applied for several grants.

“It’s been amazing to see this ramp up so quickly because of the demand and the need,” said Graham.

Reporters are committed to file three stories a week, which are broadcast within the station’s airings of NPR’s newsmagazines. The station has become a “lifeline” for listeners, Graham said, because the area it serves lacks local and regional coverage and some local residents lack internet at home or have poor connections.

“Just staying on air is an essential act,” said Graham.

Although the reporters’ eight-week run ends in the third week of May, the additional donations made since the coverage began means they will be able to extend their commitment for another eight weeks, said Graham. She hopes KSUT will be able to use this as an opportunity to have ongoing news again.

“I think we’re proving our worth right now to our listeners and that they will step up and support the continuation of news reporting,” said Graham.

Correction: An earlier version of this article incorrectly said that the KUYI show House Calls began in March. It was airing before March but shifted its focus to coronavirus content that month.