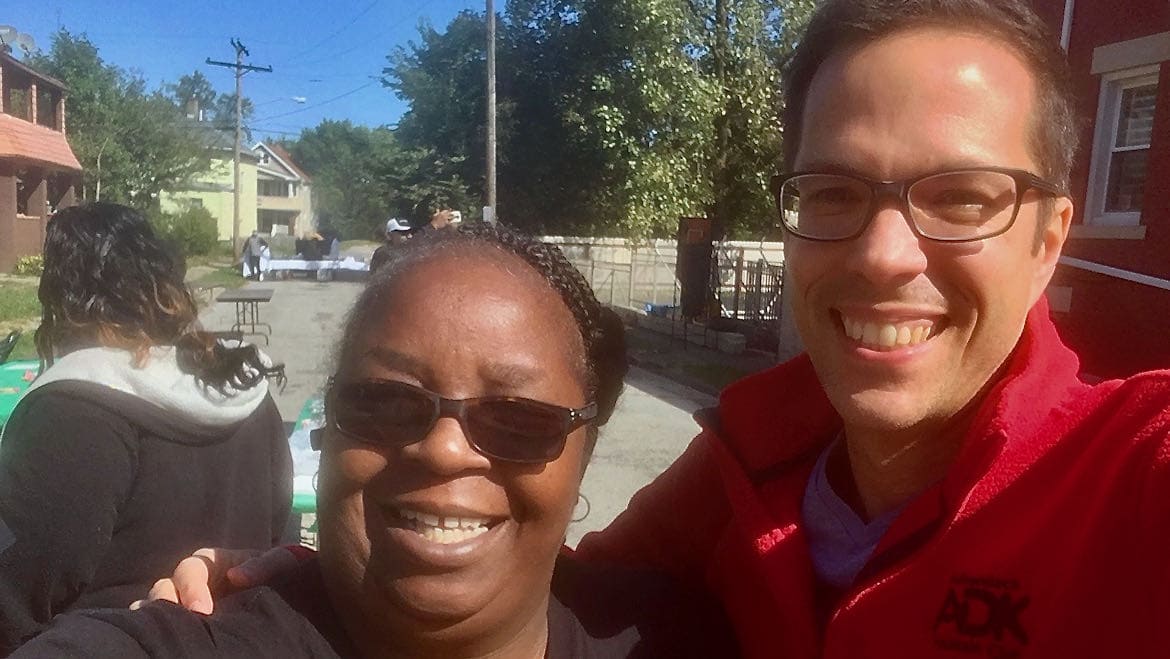 In the first of six episodes of Inside the Bricks: Woodhill Homes, WCPN 90.3 ideastream reporter Justin Glanville introduced listeners to a public housing development on the city’s east side that’s about to undergo a massive makeover. He attended a resident meeting and profiled a woman who’d been waiting years for a new bathtub, illustrating the vast maintenance backlog in public housing.

As the show progressed, Glanville tagged along on a job interview at a local deli, showing the limited, low-wage job options available to Woodhill residents; shopped for healthy foods with another tenant and discussed health disparities among Black and white residents; and attended an after-school theater program and hung out with two stay-at-home dads, exploring what it’s like to raise kids in public housing, where only 15% of residents say they feel their kids are safe.

Inside the Bricks capped a two-year, $350,000 planning effort by the Cuyahoga Metropolitan Housing Authority and the Department of Housing and Urban Development to reimagine Woodhill Homes and the neighborhood around it. Woodhill, which is located on the city’s east side and houses nearly 1,000 residents, is one of the oldest public housing projects in Cleveland and the nation. CMHA recently applied for a $35 million Choice Neighborhoods grant to tear it down and rebuild it as a mixed-income community.

By letting residents speak for themselves, Glanville, who worked as an independent journalist before joining ideastream in 2018, avoids the kind of superficial, crime-focused reporting on Black neighborhoods that is often seen in other Cleveland publications. He also helps listeners, who might otherwise drive by Woodhill without ever really seeing it, get to know the community.

“There’s so much stereotyping of public housing,” said Glanville. “Even well-intentioned people have pretty negative stereotypes of public housing. To go deeper, we thought we really needed to hear from people living in public housing, to talk to them about what they wanted to talk about and present that.”

“The idea was, how can we listen to people in their neighborhood and tell their stories?” he added. “And hopefully that informs what happens there in the future in some way.”

Mike McIntyre, ideastream’s executive editor, worked closely with Glanville on the show. He said Inside the Bricks was effective because Glanville, who is white, earned residents’ trust. The show also helped bridge the gaps between Woodhill and the surrounding community and opened up newsroom conversations about how narrative storytelling could be part of reporting.

“The thing about Justin is he doesn’t want to just go and tell people’s stories,” said McIntyre. “There’s a power dynamic for any reporter going into that situation. You’re asking the questions. The way he approaches his work and this series in particular is, ‘These are your stories, and I want you to be in control of how to tell them and telling them.’ He just went there with open ears.”

In 2017, Glanville and ideastream approached the Saint Luke’s Foundation in Cleveland, whose mission includes helping to address health disparities in communities around Woodhill Homes. They were ultimately awarded a two-year, $200,000 grant to report on the efforts to transform Woodhill.

As a result, Glanville had the luxury of time. He was able to spend more than a year pre-pandemic getting to know residents before reporting any stories. One of the people he got to know was co-host Jeanette Marbley, a longtime tenant whose salty opinions and quotable quips are liberally sprinkled throughout the podcast. She and Glanville eventually became close enough that they shared personal details of their lives and she advised him on what type of baby soap to use for his newborn son (lavender).

“Ordinarily, when you’re on a news deadline, you have to turn something around and then move onto the next thing,” Glanville said. “It gets the news out there, and I don’t mean to knock that, but it doesn’t necessarily build trust or relationships over time. That’s what working over a longer timeline allows.”

This kind of embedded reporting is at the crux of Glanville’s approach, which goes beyond reporting about physically rebuilding Woodhill Homes to what’s needed to give residents real opportunity. Through telling residents’ stories, he shows a softer side to Woodhill that only residents see. Yet he also doesn’t shy from issues like crime and violence.

Glanville’s reporting shows that while the solution to public housing’s issues is often seen as tearing down and building new, that doesn’t necessarily fix problems. Glanville completed research in graduate school at Cleveland State University showing that when public housing at nearby Carver Park was torn down and rebuilt, fewer than one-third of residents moved back.

“The systems we have in place in our city and our country have no idea how to deal with [Black poverty],” Glanville said. “Or maybe more accurately, no desire to deal with it, other than to knock it down and make it look better.”

Public housing conditions are a serious issue. HUD faces a $70 billion repair backlog, Glanville reports, with little political will in Congress to address it. But too often, the real problem is that residents don’t have access to jobs and education and live in unsafe neighborhoods. Inside the Bricks examines whether Woodhill can avoid the fate of Carver Park.

“In a tough, journalistic sense, we thought that we could hold CMHA and the federal government accountable to doing right by residents,” he says. “And in another, softer sense, we hoped that we could get people’s voices onto the radio and onto the podcast, so we could all just listen.”

Since the podcast was launched, CMHA officials have moved forward with building a laundry room for residents. Glanville said they also included podcast stories in their recent $35 million application to HUD’s Choice Neighborhoods program. “That’s not something you see every day, a planning application that includes these kinds of qualitative stories from residents,” he said.

McIntyre said Inside the Bricks helped to change the conversation about how Woodhill Homes gets redeveloped. In the show’s final episode, a panel discussion at the City Club of Cleveland, leaders examined how CMHA can avoid falling into the trap of the “disaster narrative” that plagues public housing, too often leading to developments being thoughtlessly torn down.

“We want to be able to try to create opportunities for people to be a part of the overall community and not just be an island,” CMHA CEO Jeffrey Patterson said in the final episode.

“We want people to be able to participate … and everybody to have the opportunity to exchange, participate and benefit.”

Co-host Jeanette Marbley said she remains hopeful about Woodhill as long as CMHA enforces its rules and builds ongoing relationships with residents. “It will give the area a new look, maybe invite more people throughout the city to ride through to see what it looks like,” she said. “Instead of being blocked off from community, it can be part of the community.”

Inside the Bricks not only incorporated the voices of people who live in public housing into its reporting on Woodhill, but ideastream reporters also sought feedback from Woodhill residents, providing laptops and headphones at a produce pickup during the pandemic so residents could listen to stories and asking them to fill out a survey about their coverage.

“As a journalist, you never really know what people think about your reporting,” said Glanville, who added that Woodhill residents felt that the reporting was authentic and reflected their voices and opinions. “This really helped me grow.”

“He listened,” said Marbley. “Justin was showing up for things, participating and actually listening. He was there for the negative and the positive. The most important part is he was building bridges with the residents, hearing their voices and speaking their words for them.”

Some residents criticized the show for not featuring Marbley more and for being led by a white reporter. McIntyre said those criticisms are valid and that ideastream hopes to address them as part of a renewed push for diversity, equity and inclusion. The organization’s staff is 78% white, 14% Black or African American, 4% two or more races, 2% Hispanic or Latino, and 2% Asian. That’s compared to a population in Northeast Ohio’s five-county area that is 71.7% white, 19.7% Black or African American, 4.7% Hispanic or Latino, 2% two or more races and 2% Asian, according to 2020 U.S. Census data. Over the past seven months, ideastream staffers have been holding monthly discussions about DEI and have conduced all-staff racial equity trainings, among other initiatives.

“Do we need to have a more diverse staff? We do,” McIntyre said. “That’s a progression. Our organization is committed to it and a whole lot of other antiracist measures.”

McIntyre and Glanville said that a lot of planning went into reaching a diverse audience and making sure that the show’s participants were treated equitably. Ideastream hired and paid Marbley as co-host and partnered with local low-power community radio station WOVU 95.9, which serves the nearby predominantly Black communities of Central, Kinsman, Woodhill and Buckeye. They also hired local musician Ryan Easter, who is Black, to develop the show’s theme song and music.

In addition to airing as a podcast, the episodes were broadcast once a week during The Sound of Ideas, ideastream’s 9 a.m. talk show. “We basically took a typical four-minute feature spot and did it over 40 minutes,” McIntyre said. “We couldn’t fit what Justin wanted to do in a newscast, so we said, ‘Once a week, we’re going to take as much time as we need to put this out there for people who don’t listen to podcasts.’”

Inside the Bricks ultimately reached an audience totaling 83,000 plays and downloads as of the deadline for this article, according to McIntyre. It also found a national and even international audience through the NPR One app, which pleasantly surprised Glanville. “That wasn’t necessarily something that I was expecting,” he said. “It became a great way to reach a broader audience.”

In the future, Glanville is looking forward to doing more longform reporting that puts resident voices first, especially in underserved communities of color in Cleveland. “People really want to explore that, especially in the moment we’re in when we’re understanding just how deep racial bias goes in our country,” he said.