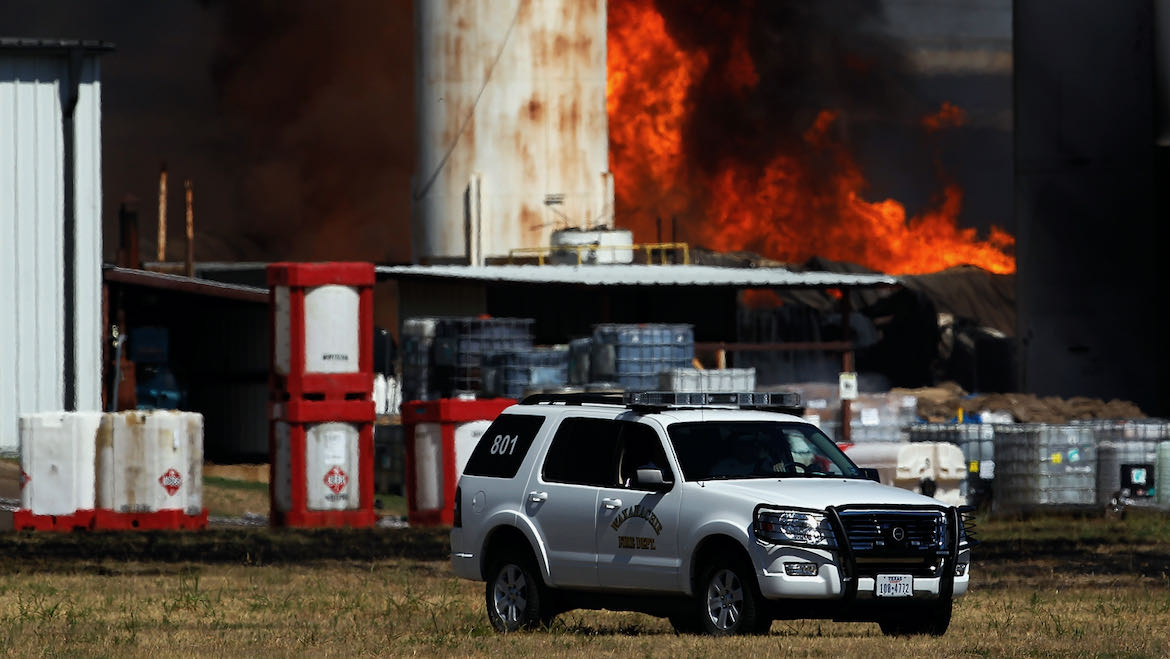 A four-part reporting series from Texas Public Radio and Houston Public Media examines chemical disasters in Texas to ask why they keep happening and what — if anything — is being done to stop them.

Fire Triangle is airing on Texas Matters, a weekly newsmagazine program hosted by David Martin Davies and produced by San Antonio’s TPR. Each installment is also packaged into a podcast. The episodes are expected to run up to 30 minutes in length.

The first report, “Houston City Limits,” released Jan. 24, focused on the one-year anniversary of a chemical explosion in Houston’s Westbranch neighborhood that killed three people and injured many more.

In the past two years, about half a dozen chemical disasters have occurred in Texas neighborhoods. These events are not uncommon in Texas, however. In the Houston area, the petrochemical capital of the United States, more than 12 explosions, fires and toxic releases occurred between November 2014 and May 2016, according to a 2016 Houston Chronicle investigation.

Subsequent episodes include “Shelter in Place,” which looked at Texas’ regulations for handling chemical disasters, and the most recent episode, “Fertilizer and the Feds,” which aired Sunday and looked at federal efforts to prevent chemical explosions. The fourth installment, set to release Feb. 14, will examine how climate change may affect the severity and recurrence of these incidents.

The TPR and HPM newsrooms began collaborating to report the series through the Texas Newsroom, a journalism hub involving public radio stations across the state and NPR. The collaboration allows member stations and NPR “to boost coverage and to work together to do work that previously we might have not been able to do in our own silos,” said Dan Katz, TPR news director.

Staff of the Texas Newsroom includes a managing editor who is based at KUT in Austin, senior editors at TPR and KERA in Dallas. Members of the newsroom’s newscast team work from different stations and collaborate to produce six live newscasts each day.

The idea came up when the Texas stations were working to build the newsroom, Auster said. He suggested a project on chemical disasters in Texas as an example of a big story that the stations could take on if they teamed up.

“It was only by creating a structure of the Texas Newsroom that brought the different skills together, and then Dan [Katz]’s vision to push that made it happen,” Auster said.

Walsh began work on Fire Triangle last summer by sorting through records and talking to people about recent explosions. In August, he traveled to Houston to do some reporting there. Later that month, he began collaborating virtually with HPM Environmental Reporter Katie Watkins to co-report and host the series.

Before Fire Triangle, Watkins reported daily news coverage of chemical explosions in the Houston area. Joining the series team allowed her to look at the issue from a new perspective.

“It was nice to take a step back and dive into it a little deeper and look at some of the bigger themes and also look at it more from a statewide perspective,” Watkins said.

Walsh said that having Watkins on this podcast was critical.

“First, she’s an excellent reporter, but she’s also local,” Walsh said. “So much of the series has so much bearing and is about what’s going on in Houston. It is the petrochemical hub of Texas and … the country, so having someone who’s actually based there was crucial.”

“To do this in a media-friendly, listener-friendly way meant telling people’s stories, sharing their lives and then asking the watchdog question,” Eisele said. “I don’t think you could have done that in one story that I would have continued listening to because it’s just too dense.”

To report the stories, Walsh and Watkins used enhanced fieldwork equipment, including boom pole microphones, and followed guidelines to wear masks and social distance from their sources whenever possible.

“It was always made very clear to us by management that we should not put ourselves in any situation in which we feel uncomfortable or unsafe,” Walsh said.

“In the first episode, I met up with [Julio Granillo] in person because he wanted to be able to show me the damage that was still on his home,” Watkins said, referencing a community member she interviewed for the story. “We just figured it out, how to have a longer mic so that you could maintain those six feet of distance and still get good audio quality.”

In an email to Current, Walsh said he and Watkins collaborated on every part of the series, but he did most of the reporting in the third episode while she reported most of the fourth. “I definitely made an effort to keep Katie in the loop on my reporting,” Walsh wrote. “I had a lot of those lightbulb, revelatory moments for the third episode as I uncovered certain information. Every time I had one of those moments, Katie was the first person to receive an all-caps text with multiple exclamation points.”

Walsh explained in his email that when recording the podcast, that he and Watkins would call each other and have one earphone attached to their phones and the other to a monitor so they could better hear themselves and maintain a conversational tone.

By maintaining this level of communication, Walsh believes that it helped the two develop a rapport, especially since they did not know each other before they began reporting together in August. The co-hosts still have not met in person.

With the final episode yet to air, Walsh and Watkins agree that they’ve started to answer their central question about the roles of federal, state and local governments in preventing chemical explosions.

“It is a multifaceted kind of matrix because there are so many government agencies with a hand in this that you really have to go from a microscopic level to this very wide lens when you’re analyzing things,” Walsh said.

There are still more angles to pursue, however.

“There are so many follow-ups and so many stories that we wanted to tell that we couldn’t even fit into the series,” Walsh said. “What format those will be presented in is not determined just yet, but I am sure Katie and I will both continue to report on these issues for as long as we are covering environmental issues in Texas.”

Watkins described the reporting she did on Fire Triangle as a foundation for her environmental beat going forward. She has learned about issues that “will continue to emerge,” she said.