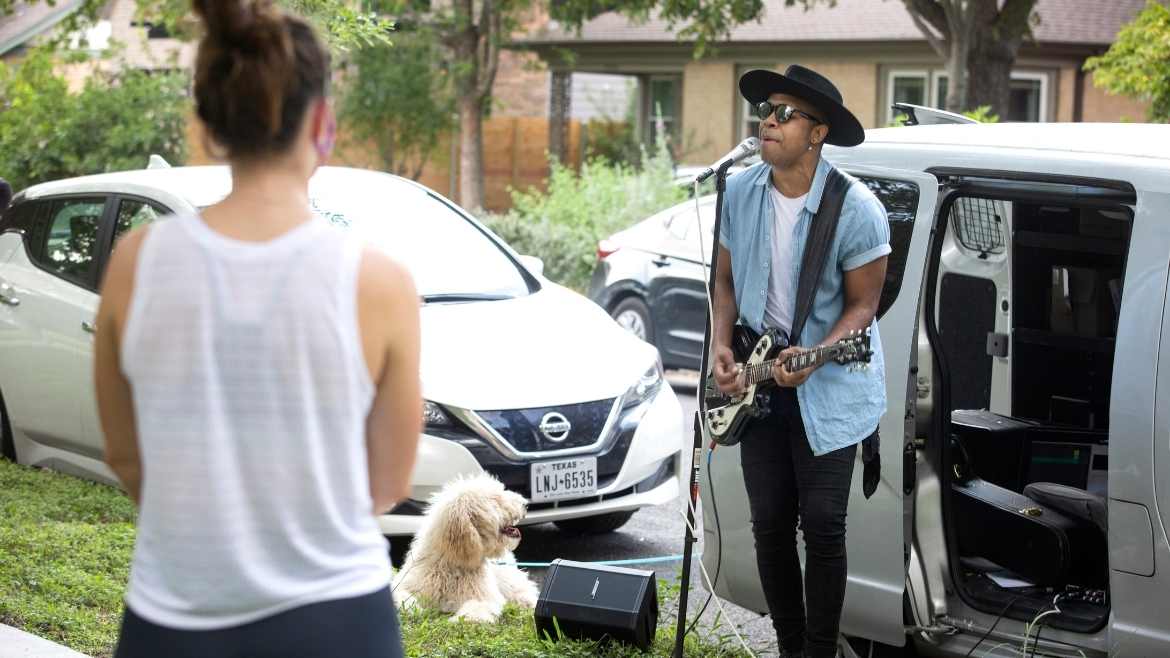 Austin musician Mobley, who is featured in KUT's "Pause/Play," performs in September for a fan who won a private, socially distanced concert.

KUT/KUTX in Austin, Texas, has captured its biggest podcast audience yet with a new look at how the pandemic has affected the city’s legendary live music scene.

Launched in September, Pause/Play has received around 3,000 downloads per episode, more than any other podcast produced by KUT and KUTX Studios. In its first five episodes, the podcast has covered event cancellations, the city’s shutdown and partial reopening, and the experiences of artists and venue owners.

“[Austin’s] nickname — for lack of a better term — is ‘the live music capital of the world,’” KUTX PD Matt Reilly said. “And so, if we can’t do live music right now, what does that do to the city’s identity?”

Pause/Play co-hosts Miles Bloxson and Elizabeth McQueen said that they were surprised to find a sense of optimism within the music scene. Many musicians they’ve spoken with are remaining positive despite their thinning paychecks.

Some musicians have taken to livestreaming performances or writing songs about the pandemic, the hosts said. Musicians they’ve spoken to have also been examining their careers and the state of the industry as a whole.

“One of the big conversations in Austin has been that, prior to the pandemic, the music scene was not equitable,” Reilly said. “And as we reopen, how do we make structural changes?”

Reilly said that musicians often had trouble getting paid for their performances and some acts faced discrimination based on their genre.

“Rock acts, country acts don’t have as much trouble getting booked into venues as hip-hop, soul and R&B acts do, particularly on the hip-hop side,” Reilly said.

Venues have turned away hip-hop acts because of their style of music or have asked hip-hop acts to have insurance for their performances, Reilly said. The slowdown from the pandemic has instilled hope in some that reopening will allow for building a more equitable live music scene.

Bloxson said that a few of the musicians she and McQueen spoke to on the podcast are hoping to “get taken care of better” when the city fully reopens.

“[Musicians] are hopeful, too, that their value will finally be seen, that it will translate into a better quality of life,” Bloxson said. “Or [that they will] just be able to do what they love and be compensated for it in the way that they want to be compensated.”

While artists are hopeful for the future of the industry, venues have been in “survival mode,” Bloxson said.

“There have been people who have looked at the situation and have been like, ‘I’m out,’ … and I think that’s also a really valid response to these times,” McQueen said. “It’s not all hope.”

The turbulent nature of the pandemic and lockdown rules in Austin have complicated keeping the podcast up-to-date, McQueen said. After recording the first episode about the decline of live music, Bloxson and McQueen noticed a resurgence in music around the city and frequent changes to lockdown rules.

“While we were making [the first] episode, literally it seemed like live music came back to Austin,” McQueen said.

To avoid releasing episodes with outdated information, the hosts began adding news updates at the beginning of each installment with information about the status of reopening in nearby counties.

Episodes of Pause/Play vary from 30 minutes to an hour in length and are released every other week. The show has yet to generate revenue for the station, but Reilly said he is in talks with prospective sponsors.

The show’s first season will include at least 20 episodes. No plans have been made beyond that, but Reilly and the co-hosts said they would be interested in focusing on other U.S. cities.

“I hope that when people listen to it, they get the resources they need. I hope that they get something for their soul that might help them right now,” McQueen said. “I just hope it helps because this is a really tough time, and I would like to think that we’re providing something that is of service to people in multiple ways.”