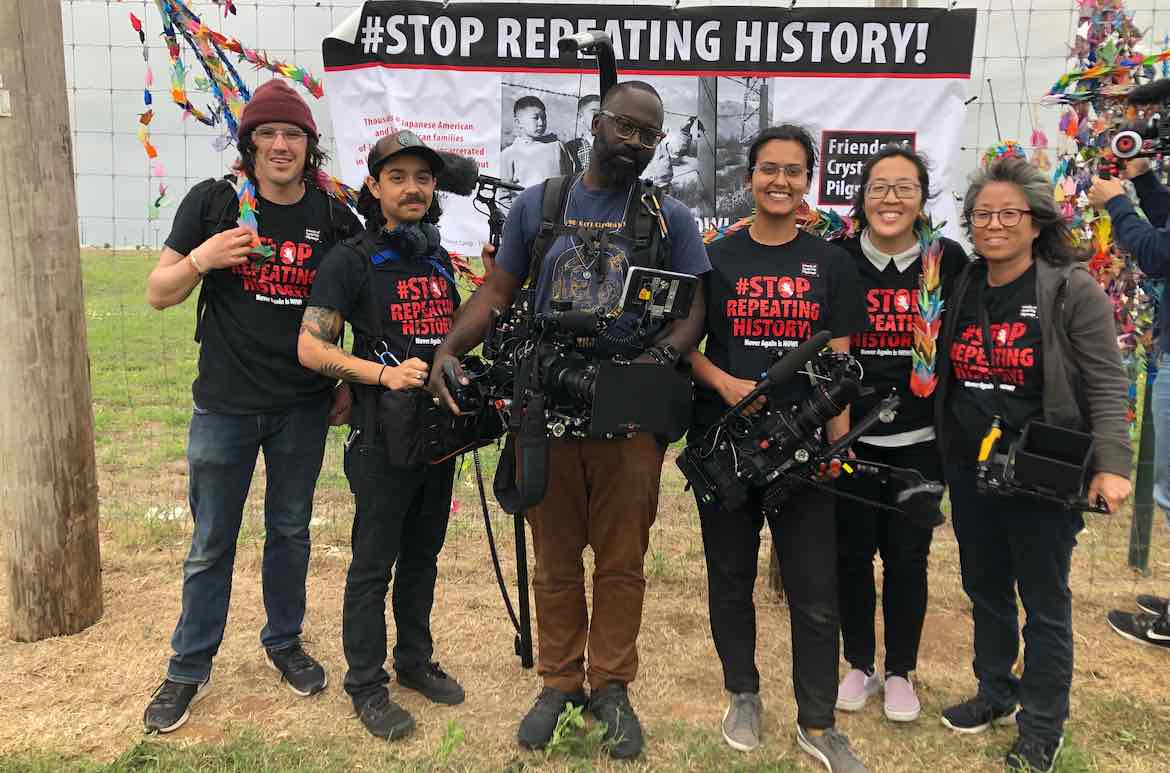 The production crew for "Asian Americans" at a 2019 rally outside the detention center in Crystal City, Texas, where Americans of Japanese descent were imprisoned during World War II.

This essay is part of Creative Futures, a series of provocations by artists, documentary filmmakers and journalists describing concrete, actionable plans that would help transform society toward a more just, equitable and democratic future.

The Ford Foundation’s Creativity and Free Expressions program initiated the project by inviting 44 thinkers from the arts, documentary filmmaking and journalism to contribute essays responding to demands for change that have risen from the inequities laid bare by the COVID-19 pandemic, police killings of people of color and protests that spread globally in response. The prompt to essayists requested “provocations” drawn from personal experience to envision how their sectors can change to advance social and cultural transformation.

Grace Lee’s provocation on the need for “more than one lens” for PBS’ long-form documentary films is republished here in full with permission from the Ford Foundation.

For many, public television is synonymous with Ken Burns. Documentary series like The Civil War, Baseball, Jazz and The Vietnam War have led PBS to market him as “America’s storyteller,” as if there were only room for one. It’s worth remembering how and why PBS came to be, and time to reinvent this system for today’s America.

In 1967, amid widespread civil unrest, CPB was created by an Act of Congress “to expand and develop a diversity of programming dependent on freedom, imagination and initiative on both local and national levels.” PBS was founded in 1969 to interconnect public television stations and distribute programs. Fifty-one years later, as we undergo another societal breakdown and racial reckoning, how much does PBS reflect the audiences it was intended to serve?

I take this question seriously because I largely owe my own documentary career to PBS. In 2020, I was a producer on Asian Americans, a groundbreaking series for which we had five hours to tell 150 years of history spanning from the Chinese who built the railroads to South Asians targeted after 9/11. Compare this to 16 hours of Country Music, which also aired in 2020, or 13 hours of The Roosevelts — both by Ken Burns. His 2021-2024 slate includes six hours on Ernest Hemingway, eight hours on Muhammad Ali, and four hours each for Benjamin Franklin, and the American Buffalo. When bison merit 80% of the airtime afforded to Asian American history, it calls into question not only the leadership of public television but also who gets to tell these stories, and why.

The decades-long interdependence of PBS decision-makers, philanthropists, and corporate funders with one white, male filmmaker highlights the racial and cultural inequities perpetuated by this system. The amount of broadcast hours, financial support (from viewers like who?), and marketing muscle devoted to one man’s lens on America has severed PBS from its very roots. Wasn’t the initial goal to break down inequality?

So what do we do about it?

First, ensure that public television board rooms, executives, local stations and filmmakers reflect the diversity of America. Every tentpole series from American Masters to Frontline to Independent Lens has been led by white decision-makers since inception. What would these series look like with BIPOC at the helm?

Fund seasoned BIPOC filmmakers at the same level that PBS has supported Ken Burns for the past 40 years. Burns is a reliable moneymaker for PBS, but that doesn’t mean others could not be. Risk aversion is a real concern within a system threatened by defunding every year, but this is the time to be bold. Sidebar “diversity development” programs are not enough. Ample talent exists to create urgent and necessary programming like Eyes on the Prize or Asian Americans on a yearly basis, not once every generation.

Reassert that PBS is not beholden to one audience for its viewership and revenues. Limiting Black, indigenous, Latinx, and Asian American content to token one-offs and heritage months sustains the myth that our stories are something other than part of the American experience. It’s time for a new canon and new investment in audiences who can be a financial engine for PBS.

Public television leadership must redesign its future together with the storytellers and audiences who will keep it relevant for the next 50 years. If we don’t start in this extraordinary year of reckoning, PBS will fail its founding ideals once again.

Since directing and producing two episodes of Asian Americans, filmmaker Grace Lee produced and directed with Marjan Safinia And She Could Be Next, the 2020 POV documentary miniseries that was predominantly staffed by  women of color and BIPOC filmmakers. She also produced and directed the Peabody Award–winning documentary American Revolutionary: The Evolution of Grace Lee Boggs, which debuted on POV in 2014.

9 thoughts on “To truly reflect diversity, PBS must end its overreliance on Ken Burns as ‘America’s Storyteller’”