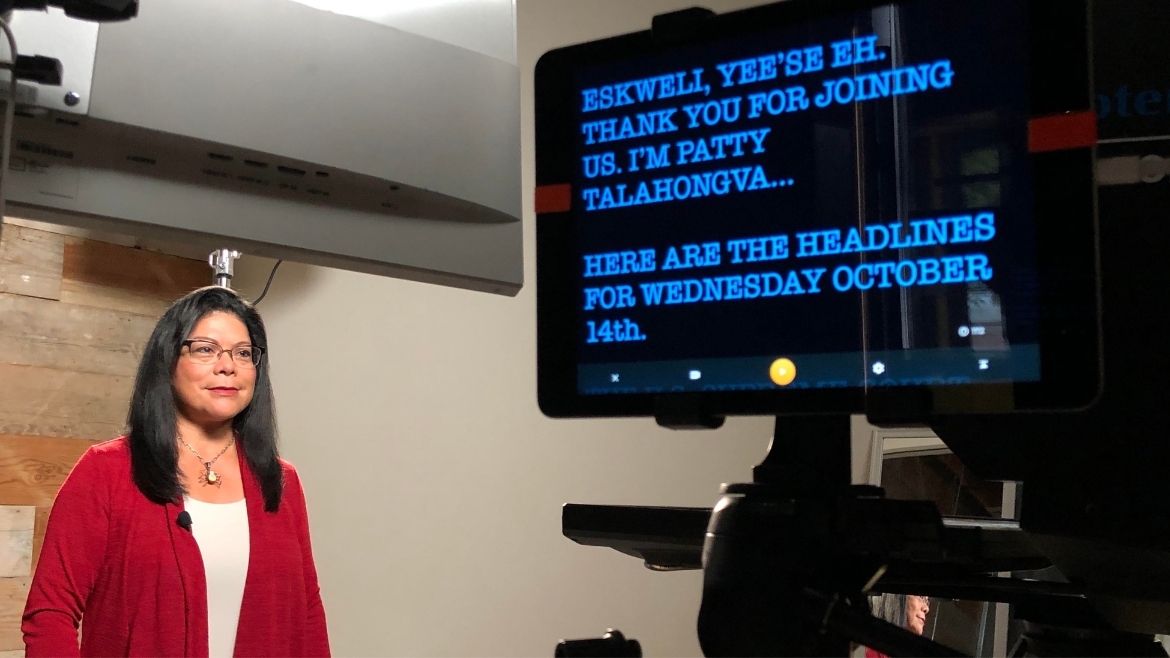 ICT Editor Mark Trahant joined the news service in 2018 after it took a two-year hiatus. His efforts since then to expand ICT’s audience and multimedia production led to the TV broadcast, also titled Indian Country Today.

“We’ve had days where it all falls apart. It’s been a learning experience,” Trahant said. “Every day we try to get a little better and try to learn from the day before.”

The show covers a range of topics related to the Indigenous community, including breaking news, profiles of Indigenous political candidates, features about accomplished Native Americans, COVID-19 data and popular culture. Each broadcast is under 30 minutes.

One show even featured an interview with Nathan Apodaca, whose video of himself skateboarding while listening to the Fleetwood Mac song “Dreams” went viral. Apodaca is half Northern Arapaho.

“By presenting the news and people doing ordinary things, like the skateboarder, we’re telling the country a richer story about Indian country,” Trahant. “Rather than always being about confrontation or debates or political issues, they’re seeing a much more rounded picture of everyday life.”

ICT initially planned a weekly broadcast, but spending less on travel due to the pandemic freed up funds to boost production. Donations from the San Manuel Band of Mission Indians, Wend Collective and Vision Maker Media fuel the broadcast’s budget.

The show aims to inform Indigenous audiences about their communities while keeping Indian Country in modern conversations.

“Indians are less than 1% of the nation’s population, and in a lot of areas in the country, they’re not even acknowledged as real people anymore,” said Shirley Sneve, who is handling the show’s marketing. “They’re like something from history.”

The pandemic has prevented ICT from accessing its permanent studio on Arizona State University’s campus, so the broadcast is recorded in a temporary studio in the Phoenix Indian School, “which has all kinds of irony,” Trahant said. Originally built to culturally assimilate Native Americans, the school is now part of a community events space that pays tribute to the thousands who attended.

Arizona PBS in Phoenix has carried Indian Country Today since May. The station has received “only positive” feedback from its viewers about the show, said interim GM Julia Wallace. Its lifestyle stories have been especially popular with viewers.

“There are some amazing stories about Indigenous people and Indigenous communities that haven’t been told,” Wallace said. “And Indian Country Today comes along and does such a nice job with that.”

Arizona PBS shares a space on ASU’s campus with ICT and publishes other ICT content on its website but carries no other Native American programming. Wallace acknowledged PBS’ need to reach audiences outside of its normal viewers.

“We want to serve everyone, and we want to help everyone sort of understand each other better,” Wallace said. “And so, in telling stories, whether it’s the Latinx community or the Black community [or] the Indigenous community here, we’ve got to do a much better job at that.”

FNX, a national broadcast network dedicated to Indigenous content, and stations in Alaska and Colorado also carry the show. Sneve, who formerly led Vision Maker Media, said she is working to get the show picked up by stations in North Dakota, South Dakota and Oklahoma.

Trahant said that though producing the daily broadcast can be “harrowing,” it is “the most important thing” he has undertaken.

“The opportunity is one that just doesn’t come very often,” Trahant said. “So we need to take advantage of it every way we can.”