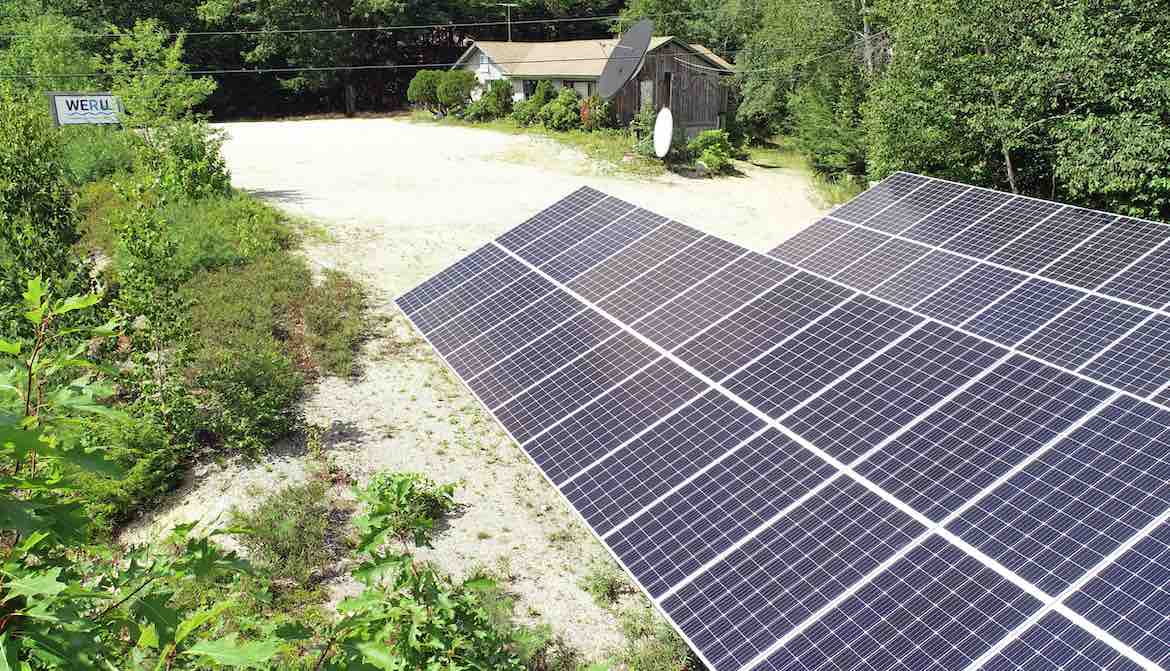 WERU-FM in East Orland, Maine, has joined a small group of community radio stations that have converted to sustainable energy.

In late August the 12,000-watt station’s offices and studios began running on electricity generated by 68 solar panels installed in the far end of its parking lot. Its transmitter, located about 15 miles away in the town of Blue Hill, is not run by the solar array.

Although most of the other sustainably-powered stations are in the sunnier and windier Western states, one radio station in the East runs on hydropower.

Maine’s WERU calls itself “A Voice of Many Voices”; its mission statement lists environmental stewardship among six values that guide its service to the community. Now program hosts and DJs routinely inform listeners that their show is coming from the “solar-powered studios of WERU.”

“Anyone who goes solar has passion for the environment, and as an organization we certainly do,” GM Matt Murphy told Current. “We did it because we felt it was the right thing to do and we had the ability to do it.”

The 25-kilowatt solar array was installed and financed by Sundog Solar, a company based in Searsport that has been a WERU underwriter for 10 years. Under what is known as a power purchase agreement, the station will buy electricity from Sundog, saving more than $2,000 a year in utility costs. Sundog receives the federal tax credit and depreciation write-off. After six years, WERU has an option to buy the system, which cost about $65,000 to install, for its fair market value. Chuck Piper, Sundog’s co-owner, expects that will amount to about half the installation cost.

Murphy said WERU would consider installing solar panels to power its transmitter on Blue Hill Mountain. Piper estimates that would require about a half-acre of panels.

WERU was founded in 1988 in the town of Blue Hill, a culturally vibrant summer tourist destination on Blue Hill Bay, which lies west of Mount Desert Island and Acadia National Park.  The radio station was originally located in a converted chicken barn known as The Henhouse, which was also home to a recording studio for the barn’s owner, Noel Paul Stookey of Peter, Paul And Mary fame. Stookey was one of WERU’s founders.

The other sustainably powered public radio station in the Northeast is WJFF-FM in Jeffersonville, N.Y. It brands itself as “Public Radio for the Catskills and Northeast Pennsylvania.” Since the station went on the air in 1990, its offices and studios have run on hydroelectric power from a dam on Lake Jefferson. But Tim Bruno, interim GM, said the dam is failing, and the station will be moving to a new building that has been donated. Eventually, that location will run on solar power, he said.

Two radio stations in the Western U.S. are solar-powered: KTAO, a commercial station in Taos, N.M., that bills itself as “Solar Radio”; and KZMU, a community station in Moab, Utah. Its website says the station’s call letters stand for “Krank Zee Music Up!” KZMU has been running off a 11.4-kilowatt solar system since 2008. KZMU’s parent, Moab Public Radio Inc., received a $60,000 grant from Rocky Mountain Power to install a 60-panel solar array.

About 350 people support KZMU financially, according to GM Serah Mead. The station began broadcasting from a dilapidated trailer inherited from the National Park Service. Now it’s located in a one-story home overlooking the Moab Valley, near Arches National Park and Canyonlands National Park.

With the solar panels generating electricity up to 10 months of the year, KZMU’s annual electric  bill is around $200, Mead said. KZMU has been able to prevent more than 350,000 pounds of carbon dioxide emissions since the panels were installed 12 years ago, she said.

At the top of the hour, KZMU hosts remind listeners that the station is “solar-powered and community empowered.”

Further west near Jackpot, Nevada, Boise State Public Radio brings its signal across Idaho’s southern border via KBSJ-FM. Starting in 2001, Boise State powered the transmitter with three wind turbines on a mountain outside Jackpot. The federal government’s now defunct Public Telecommunications Facilities Program backed installation of the turbines with a $251,000 grant.  While the turbines were running, KBSJ was the only wind-powered broadcast tower in the nation.

But the mountain location turned out to be a “turbine killer,” said Mike Bergey, CEO of the Oklahoma-based Bergey Windpower Co. that manufactured the turbines. The transmitter site was virtually inaccessible nine months of the year, and weather conditions could be extreme. Winds would gust up to 120 mph on the mountain, and temperatures plummeted to -57 degrees Fahrenheit, he said.

Among the company’s 7,000 turbine sites around the world, the Jackpot installation was hands down its most difficult, Bergey said.

The wind turbines worked into the winter of 2013–14, according to Tom Michael, GM of Boise State Public Radio.

KBSJ’s transmitter is now connected to the power grid.