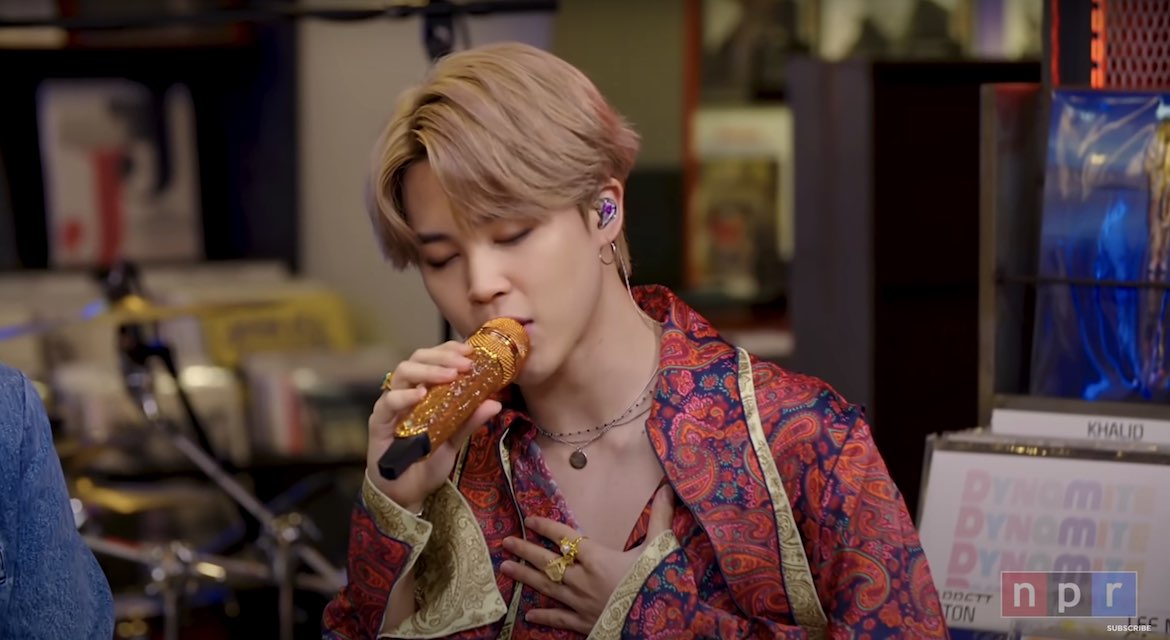 Jimin of BTS sings during the group's Tiny Desk performance.

With over 600,000 viewers, BTS broke the record for the biggest live audience during a Tiny Desk Concerts Premiere Monday.

The performance was the latest in the series of Tiny Desk (Home) Concerts, held remotely instead of at NPR’s headquarters. The “at home” update the show has received due to COVID-19 has allowed artists to put their own spin on the Tiny Desk atmosphere. Billie Eilish and her brother built a mock NPR Music studio in her bedroom, while Phoebe Bridgers chose to perform in front of a green-screen image of the Oval Office.

BTS, for their turn, performed at Vinyl & Plastic, a record store at the Hyundai Card Music Library in Seoul, South Korea, where the band is based. Surrounded by CDs, vinyl and a live band, the seven-member group was able to capture the intimate and eclectic setting that Tiny Desk concerts are known for during their stripped-down set of three songs. They performed “Save Me”, fan favorite “Spring Day” and “Dynamite,” which topped the Billboard Hot 100.

Between songs, Jin, speaking for the rest of the K-pop group, said, “We love watching Tiny Desk performances, and we are very honored and excited.”

Stephen Thompson, a writer/editor for NPR Music, said in his article about the performance, “We’ve been trying to make a BTS Tiny Desk concert happen for years now — even gaming out ways we might move Bob Boilen’s desk far enough forward to accommodate the superstar Korean boy band’s dance moves.”

If all seven members and their band had crowded behind the Tiny Desk, it would’ve been one of the largest groups the office venue had ever hosted.

The “at home” collaboration between BTS and Tiny Desk (Home) proved a success. In just 25 minutes, the video broke the record for the most-viewed Tiny Desk performance within 24 hours of premiering. It has gained over 6 million views 24 hours later.

Powering these viewing numbers and the band itself is BTS’ loyal fan base, ARMY, whose members, among their other charitable ventures this year, have taken it upon themselves to donate to their local public radio stations in the wake of the Tiny Desk concert. A tweet from WOSU’s Gabe Rosenberg asking them to support public radio gained over 4,600 likes in under 24 hours.

One of the main reasons the performance could finally be arranged, Thompson noted, was the adaptation of the Tiny Desk format to no longer confine artists to NPR’s offices. The change has opened the door to including more artists such as BTS.

Before their final song, “Spring Day”, BTS’ leader, RM, left the audience with, “This has been the roughest summer ever, but we know that spring will come.”