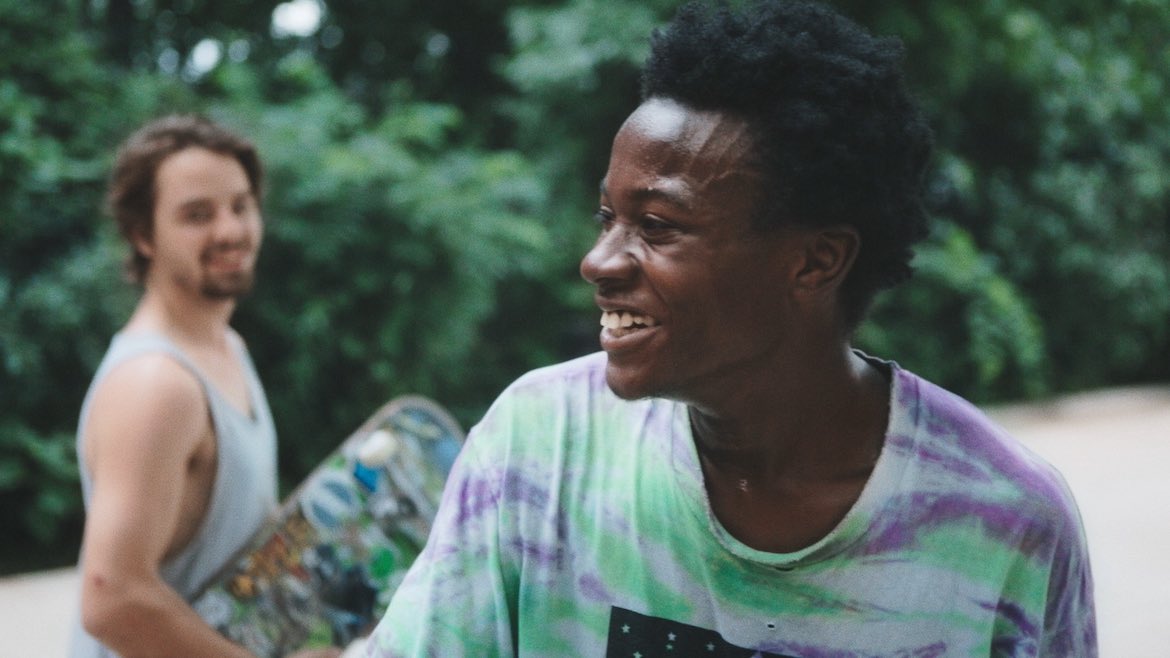 Zack Mulligan and Keire Johnson in "Minding the Gap."

How do documentaries mobilize public engagement and affect the democratic process? This is one of the core questions explored explored by producer and scholar Caty Borum Chattoo in Story Movements: How Documentaries Empower People and Inspire Social Change (Oxford University Press). Finding our culture in the midst of the “golden era” of documentary, alongside a great expansion in expressions of activism and community engagement through social media, Story Movements unveils how documentaries disrupt our dominant cultural narratives through creative and investigative storytelling. In this excerpt, Borum Chattoo considers the future of the documentary marketplace.

Four years after its first documentary acquisition, Netflix did not come to the 2017 Sundance Film Festival to play. A week of movie screenings and millions of dollars later, the streamer grabbed up a pile of both scripted and nonfiction independent entertainment content, including the $5 million-dollar purchase of Icarus, the Russian doping investigation that would go on to win the 2018 Academy Award for Best Documentary Feature.[1] The buzz in the documentary field was palpable — enthusiastic and cautiously optimistic. Following documentaries’ hot social currency, Netflix jumped into the nonfiction industry game and headed straight to the front of the acquisitions line.

Was this the beginning of a robust new marketplace and economy for documentaries, including social-issue stories — or at least a major milestone within an evitable route? Will this financial pattern mark an upward trajectory for independent documentary investment from the wildly expanding streaming entertainment universe? It’s complicated. Unquestionably, documentary helps satisfy a voracious appetite for digital storytelling content that can appeal to niche and global audiences from the likes of Netflix, Amazon, Apple, Hulu, Facebook, YouTube Red, and others on the horizon. There’s no question that documentary offerings have expanded dramatically within this century. But in the streaming era of entertainment, unequivocally predicting documentary’s imminent economic engine is a fool’s game; it moves too quickly to pin down. At the same time, contemplating the future of documentary storytelling and its role in the public sphere requires an ongoing scrutiny of the transforming media industry — its influence can’t be overlooked. What will an expanding commercial documentary marketplace mean not only for the economics of documentary film and the sustainable careers of filmmakers, but also the stories served up to vast audiences? Challenges, opportunities, and questions abound.

To wit, just one year later, the story was different at the Sundance Film Festival. In 2018, Netflix and Amazon, the big independent documentary buyers just a year prior, left the festival almost empty-handed — although they arrived with documentaries of their own, produced in-house, to premiere.[2] As Anthony Kaufman wrote in the trade publication IndieWire:

Documentaries are hotter than ever, but their production and distribution is in constant flux. In 2017, major companies were shelling out huge dollars to acquire documentaries, dramatically shifting the scales for the budgets and value of nonfiction. Then everything changed at Sundance 2018, when contrary to expectations, Netflix and Amazon deescalated the marketplace they had super-sized a year before.[3]

An immediate domino effect was evident as Netflix and Amazon receded from their headline-making financial investments in independent documentary acquisitions; Kaufman wrote: “it’s clear that their recent absence from the market has had impact — deals have taken longer to close and the price-tags have been reduced.”[4] The head-whipping speed of change between 2017 and 2018’s Sundance Film Festival streamer buying shifts captures only one small snapshot in time, and one corner of the documentary marketplace, and yet, it exemplifies the larger trend of uncertainty — both promise and questions — for the future of nonfiction storytelling in the public sphere.

The long-term strategy of the streaming networks and their relationship to documentaries is unknown. Then again, acquisition of independent nonfiction storytelling is only one piece of the pie as Netflix commissions new work from documentary filmmakers. A question to track, then, is what kinds of stories will be commissioned by the digital industry powerhouses — Netflix, Hulu, Amazon, Apple — and by which documentary talents? And how will the trends and a rich supply of documentary stories ripple out across legacy media outlets, both commercial and public, as an implication of the streaming networks’ affection for nonfiction entertainment?

Relying on a foreseeable, consistent economic trajectory from commercial streaming networks and the resulting implications on legacy outlets is, thus, tricky business. But if any lessons can be gleaned from parallel developments in scripted entertainment — or documentary history — it’s that the new platforms bring fresh competition to legacy media institutions like HBO, MTV and PBS, new financial resources, and a mandate to capture the imaginations of wide domestic and global audiences. Entertainment players are looking for big views, prestige, and profit. What might this trend mean for the kinds of documentary stories that thrive in the new media world order? Again, it’s complicated, but predictions about form are already on the table, as Anthony Kaufman outlined in a 2019 trade story:

With more commercial entities intent on making and releasing nonfiction, it’s an exciting time. But similar to Hollywood’s cooption of indie film in the 2000s, much of that energy is going towards predictable places—celebrity-focused films, true-crime, pop culture scandals, docu-thrillers, and light entertainment—leaving everything else in the lurch, or at least, more restrained financing and distribution prospects.[5]

Kevin Iwashina, veteran documentary agent at Endeavor Content and president of the International Documentary Association’s board of directors, sees the scenario in two ways. On the one hand, an expanding documentary market also will bring more production funding and distribution opportunities for smaller documentaries. And with the flood of documentary supply available, a strong position for smaller independent distributors can emerge, as he said in a 2019 media interview: “‘I think public broadcasters and international channels will have more opportunity to acquire quality films as supply increases,’ he said, while ‘independent distributors will be able to position themselves as a quality alternative to larger distributors given their precision in marketing.’”[6] On the other hand, it’s also likely that documentary filmmakers will face demands on their storytelling topics and approaches, as he said, with “increased pressure on documentary filmmakers to make their projects commercial ‘character-driven’ narratives or very high concept…One can no longer focus on just an ‘issue,’” even if, as he says, the “premium documentaries” will continue to be those films that expand knowledge and provide entertainment value together — escapism and thought-provoking at once.[7] Scholar John Corner asserted a similar prediction in 2002 about a hybrid of substance and audience appeal embedded in documentary’s trajectory: “Whatever the pattern finally to emerge, producers with a commitment to the popular audience that goes beyond profitability but that can nevertheless also generate profits will clearly be an important factor in documentary’s survival.”[8] In the contemporary marketplace, entertainment value and social consciousness co-exist in the hands of innovative documentary artists, as Field of Vision’s Charlotte Cook reflects, “We’ve seen films like The Act of Killing and Strong Island really take the art to the next level. Those are the films that really strike a chord with people because they hadn’t seen anything like it before.”[9]

As documentary filmmakers look forward, it’s too simplistic to reduce entertainment industry marketplace trends and their implications to a binary of absolute positives and negatives when it comes to social justice stories. After all, one of the most important contemporary social-issue documentaries — Ava DuVernay’s 13th, commissioned as a Netflix Original — exploded onto the cultural scene in 2016, sparking new dialogue about racial justice through its international distribution.[10] In 2018, an independent film acquired by Netflix, Yance Ford’s Strong Island, a deeply personal creative investigation into the racial motivations of his brother’s killing, vied for the Best Documentary Feature honor at the Academy Awards.[11] In 2019, pioneering documentary directors Julia Reichart and Steven Bognar struck a global distribution deal with Netflix — to reach 190 countries — for their independent Sundance-award-winning film, American Factory.[12] The same year, Roll Red Roll, director Nancy Schwartzman’s true-crime-style investigation of rape culture through a high school football sexual assault story, premiered theatrically, opened the PBS POV season in June, and launched internationally on Netflix while Schwartzman directed a grassroots impact and educational engagement campaign with the film.[13] We might optimistically look at this moment, then, as a culmination of so many decades of development — a juncture in which social-issue documentary practices are now driving audience demands and production assumptions for new stories, at least in part.

Indeed, the values and ethos of deeply intimate, artistic documentary storytelling also are on clear display in two of 2018’s exemplary, form-advancing independent documentaries licensed and distributed by the commercial streaming network Hulu, directed by makers of color — the investigative police documentary, Crime + Punishment, directed by Stephen Maing, winner of the International Documentary Association’s 2018 Courage Under Fire Award[14] and a 2019 News and Documentary Emmy Award for Outstanding Social Issue Documentary;[15]and Minding the Gap,[16] the Oscar-nominated, Peabody-Award-winning skateboarding coming-of-age story and portal into childhood abuse directed by Bing Liu. A closer look reveals a symbiotic relationship between philanthropy and the public media sector, editorial independence, and wide audience distribution. Both documentaries, while distributed on a commercial media outlet with vast viewer reach, were funded by public media and philanthropic funding. Maing’s film was partially funded through an International Documentary Association Enterprise Fund grant for independent creative investigative documentaries supported by the MacArthur Foundation;[17] and Liu’s was a co-production with POV/American Documentary and the Independent Television Service (ITVS), with funding from the Corporation for Public Broadcasting and the Sundance Institute Documentary Film Program.[18] Both filmmakers maintained editorial independence as they made their films.

As these documentaries illustrate, looking toward the future, then, calls upon filmmakers and industry leaders to recognize the interplay between editorial independence and peak artistry, and the potential reach and financial support of commercial operations alongside a robust public media sector. As they expand their documentary offerings and investments, commercial outlets are wise to look carefully at the circumstances that birth evocative, intimate documentary stories that capture audience attention — they are shaped by the authentic voices of storytellers working with creative vision and artistic control. A well-resourced hybrid system of commercial, public, and philanthropic funding and distribution can serve documentary storytellers well, and weakness in any of the three is detrimental to makers’ ability to make complicated stories and ensure audiences can see them.

[10] Ava DuVernay (@ava), “One of the things I value about Netflix is that it distributes black work far/wide. 190 countries will get WHEN THEY SEE US. Here’s a promo for South Africa. I’ve had just one film distributed wide internationally. Not SELMA. Not WRINKLE. It was 13TH. By Netflix. That matters” Twitter, (@ava, March 3, 2019,