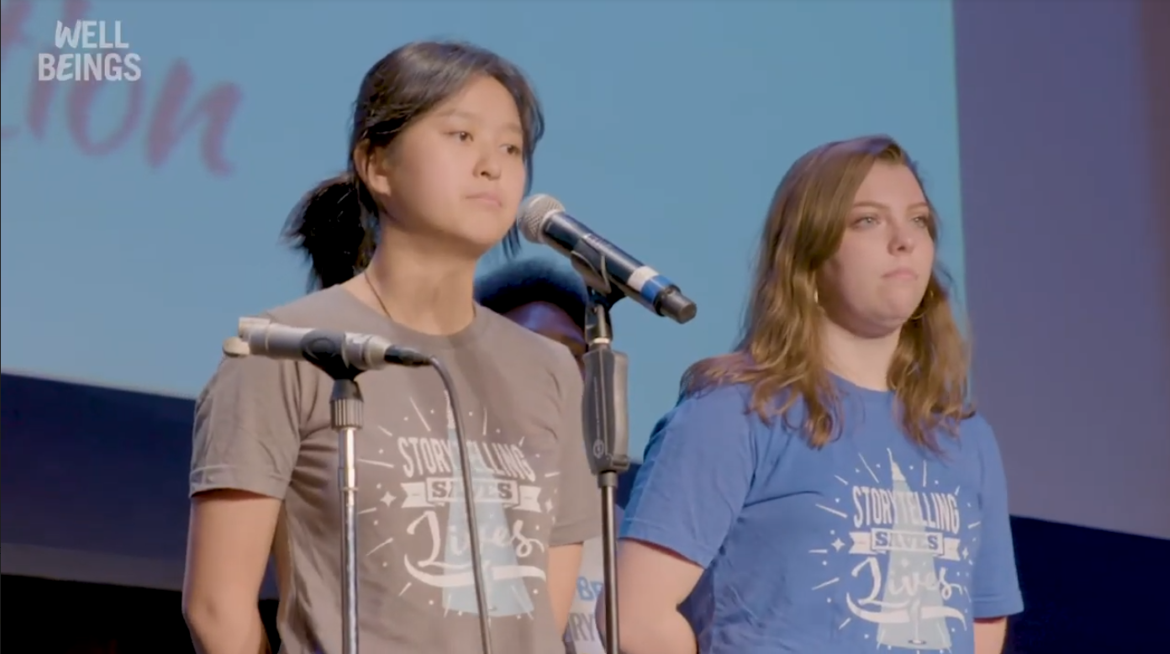 In the "Brave High" production, teens prepare for This is My Brave's high-school stage production, where they will share their stories about mental health.

Well Beings, a national public health campaign led by WETA in Washington, D.C., is rolling out with a digital-first content strategy for its first phase, a multipronged initiative focused on youth mental health.

The campaign involves multiple content partners, production of digital video and long-form documentaries, and a 24-city tour that has been complicated by the coronavirus pandemic.

The National Alliance on Mental Illness, a project partner that is participating in the tour, hosted a celebrity-studded virtual launch event last month. Matthew McConaughey, Kid Cudi, Billy Porter, Jewel and Bill Pullman were among the celebrities who participated, adding star power that helped to boost digital reach to youth through social media, said Mary Stewart, VP of external affairs at WETA.

WETA’s plans for Well Beings extend to 2028 and include two additional “chapters,” said John Wilson, chief national content officer. The campaign for youth that began this summer will build up to the 2022 PBS premiere of Hiding in Plain Sight: Our Mental Health Crisis, a two-part, four-hour program from Ewers Brothers Productions (The Mayo Clinic) and EP Ken Burns.

Hiding in Plain Sight is the “tentpole” of the youth mental health campaign, Wilson said. The documentary takes viewers into the lives of people with mental health conditions, interlacing their stories to build on each other.

Subsequent multiyear campaigns will focus on mental health issues for American adults and seniors and follow a similar arch, he said. The initiative for adults will culminate in April 2025, and the project focused on seniors is expected to run into April 2028.

To build momentum and engagement for Well Beings, WETA has flipped the traditional model for outreach campaigns, which typically ramp up a few months before the national premiere of a documentary series, Stewart said. The need for information and media resources on youth mental health is especially urgent, and documentaries produced for PBS can take years to finish, she said.

By launching the project website in tandem with station-based activities, Well Beings provides content for national audiences that can complement local productions and events on the needs that stations identify in their communities. “What we wanted to do was make something that has the power of hyperlocalism and yet the heft of a national site,” Stewart said.

The Well Beings website features a story wall of videos and social media posts; Brave Teens, a series of video diaries by teen storytellers who talk about their mental health journeys; and video segments from PBS NewsHour Student Reporting Labs.

Forthcoming digital content in development includes Brave High, an exclusive feature-length documentary on high-school students staging their own version of This Is My Brave, a storytelling project for individuals within local communities to share their mental health stories. Out of the Dark, a digital series from Redglass Pictures that uses single-person-to-camera storytelling about mental health, is expected to be released later this year.

The different productions enable WETA and its partners to “cast as wide a net as possible” to engage audiences of all backgrounds in content, Wilson said. By focusing on storytelling formats, they aim to help break down barriers to discussing mental health experiences, including the challenges of seeking treatment.

“People feel like they’re embarrassed or ashamed or unwilling to ask for help,” Wilson said. “… If we can’t remove that stigma, then we can’t get people the help they need.”

WETA is also developing two additional productions on mental health for release in April 2022. Healing in the Heartland examines health-care issues in rural communities; Life Unexpected profiles individuals who survived childhood cancer. Elizabeth Arledge, a documentary filmmaker who directed The Forgetting: A Portrait of Alzheimer’s and produced several films for Nova, is working on both programs.

The forthcoming Well Beings tour will involve regional or local NAMI chapters, according to Barb Solish, spokesperson for the alliance. NAMI has over 650 state organizations and affiliates, she said.

The tour will change thematically for each city, but most events will include mental health training, according to Stewart. Since public health rules to prevent the spread of COVID-19 vary so widely among states, Well Beings will produce a combination of virtual and in-person events.

The Well Beings team is working with interested stations to help tailor events to the needs of their communities. Stations will help identify local experts and knowledgeable stakeholders and, for in-person events, handle logistics of bringing in an audience.

Call to Mind, a five-year mental health content initiative from American Public Media, is working with public radio stations to create 90-minute programs for the first 12 stops of the tour. All the panels are currently planned to be virtual, said Managing Director Babette Apland.

The Call to Mind team and each participating public radio station will identify topics and panelists for their programs, which will include a moderated conversation and audience Q&A, Apland said. Call to Mind will consider whether topics from the tour events would be relevant to a national audience and may offer the programs for broadcast by other stations, she said. A podcast could work if the content is cohesive enough to be packaged into a series.

The tour is tentatively scheduled to host monthly events, Apland said, with possible breaks around periods of intensive news cycles, such as the November election. After the first 12 tour stops, Call to Mind will evaluate the tour’s impact and decide whether to continue. She hopes the partnership will help expand Call to Mind’s national profile.

Sponsors of the initiative include Otsuka, Kaiser Permanente, Bank of America, the American Psychiatric Association Foundation and One Mind.