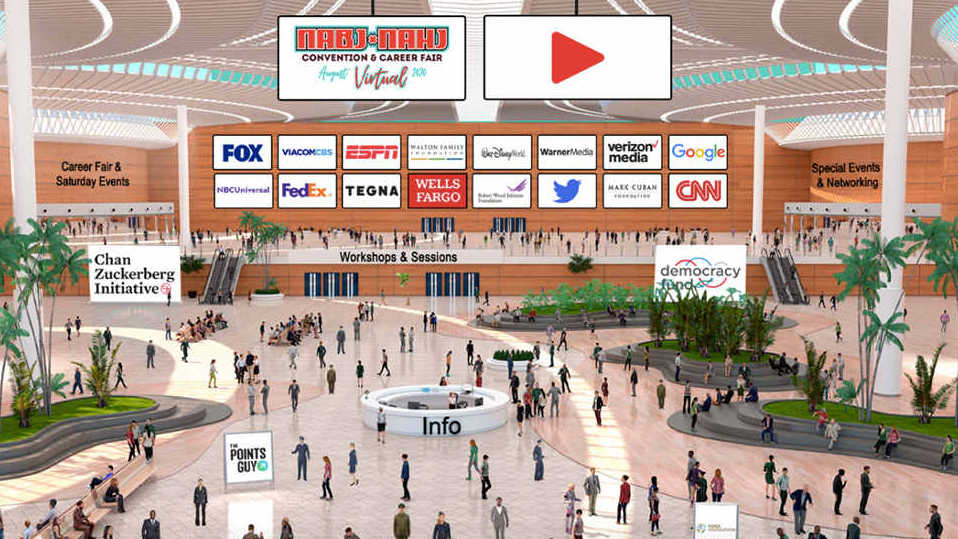 The convention lobby for the NABJ-NAHJ Virtual Convention and Career Fair.

Public media organizations tested networking online with the NABJ-NAHJ Virtual Convention and Career Fair Aug. 5–8 after the COVID-19 pandemic forced organizers to transform the conference to allow for remote attendance.

To help engage with journalists, Stacey Foxwell, VP of operations at NPR, made a virtual space of the networking area for public media organizations, known as the “Public Media Village.” Instead of booths squeezed onto a large convention floor, the virtual space, launched by event-planning platform vFairs, was equipped with illustrated booths, chat rooms and a system for video calls.

Foxwell started the Public Media Village in 2016 as a conglomerate of public media organizations that physically banded together with booths to create a presence at conferences for journalists of color, including the National Association of Black Journalists and National Association of Hispanic Journalists events. It also worked as a way to inform and recruit people of color into public media, according to Foxwell.

Before the village was established, she said, many public media organizations couldn’t afford to attend because of the high cost of purchasing a booth. This put smaller stations at a disadvantage for recruitment.

Foxwell said she established the village in an effort to educate people of color who are not familiar with public media about its mission and stations. She said that this is necessary because the NPR’s audience is largely white.

The village has become popular, according to Foxwell, who said she was forced to turn stations away this year because booths were limited.

This year, 16 stations hosted virtual booths that featured job openings, a description of the station and its mission, and a list of the station’s projects and initiatives. The interface also offered a “swag bag” of informational materials.

Six chatrooms associated with public media organizations were labeled “Think Public Media,” a catchphrase meant to encourage people to think of the organizations after the conference and apply to them, according to Foxwell.

Networking online was more difficult than in person, said Glenn Brown, manager of recruitment and benefits at Oregon Public Broadcasting.

Brown said that when he attends an in-person conference, he tends to approach and speak to shy attendees who are nervous about making the first move in networking. With the NABJ/NAHJ event, Brown could not see attendees, meaning he could speak only with those who initiated a conversation.

Brown said that attendees often did not respond when he messaged them in his station’s chatroom. That doesn’t happen in face-to-face interactions, he said.

“It’s harder for somebody to do that if you’re standing right there and you’re smiling and you say, ‘I know you’re curious. What can I tell you about this?’” Brown said.

Minnesota Public Radio Internship and Fellowship Program Manager Alicia Tran said that she experienced a similar dynamic in her chatroom. Tran said fewer attendees chatted with her at the virtual event than approached her booth at last year’s in-person conference.

“We’re struggling with that a little bit because we don’t get the same footprint that we would if we were there in one big village,” Tran said.

Participants said they were happy to get the chance to attend the conference at all.

Maria Mendoza, an intern at Houston Public Media and a rising senior at the University of Houston, said attending the conference online wasn’t that unusual since she has been adjusting to virtual work throughout the summer as a remote intern.

Mendoza, who was attending the conference for the third time, said that while she misses speaking directly with recruiters at the booths, she has taken the process in stride.

“It would be good in person, but I still get to talk to them through video chat,” Mendoza said.

No competing for space

Elise McGlothian, a seven-time NABJ conference attendee, is looking for a position in public media after being laid off from the American Cancer Society Cancer Action Network. She said that she was “grateful” that NABJ and NAHJ decided to go forward with a virtual conference instead of canceling the event because it helped her network.

McGlothian said that she was impressed by the virtual conference, particularly the “cute” cartoon layout of the convention floor and illustrated booths. She found that online interviews have their advantages. At physical conferences, sound levels on the convention floor can be overwhelming, and attendees have to compete for space in the hallways to conduct interviews.

“For me, being able to have one-on-one conversations just in my bedroom and it’s silent … I actually think that’s easier to manage,” McGlothian said.

Going forward, the administrators behind the Village want to expand their impact and hope to monitor how many conference attendees end up joining public media organizations after the events. They hope that conferences devoted to diverse journalist communities can help with recruiting talent in addition to educating attendees.

According to Think.Public.Media, the initiative established by NPR and organizations that participate at the conferences, many journalists of color have already ended up in public media due to recruitment efforts at NABJ and NAHJ events. In 2016, 36 people of color joined public media organizations as a result of recruitment, according to NPR’s Foxwell. Think.Public.Media did not gather similar data at conferences after 2016.

Laurie Spira-Savett, director of people and culture at New Hampshire Public Radio, said that she hopes that her station can become more diverse by hosting booths and disseminating information about potential jobs and internships.

“It’s part of a longer-term process of introducing the station to people,” she said. “We hope that once people see who we are that they’ll come back and check our website from time to time for future openings.”