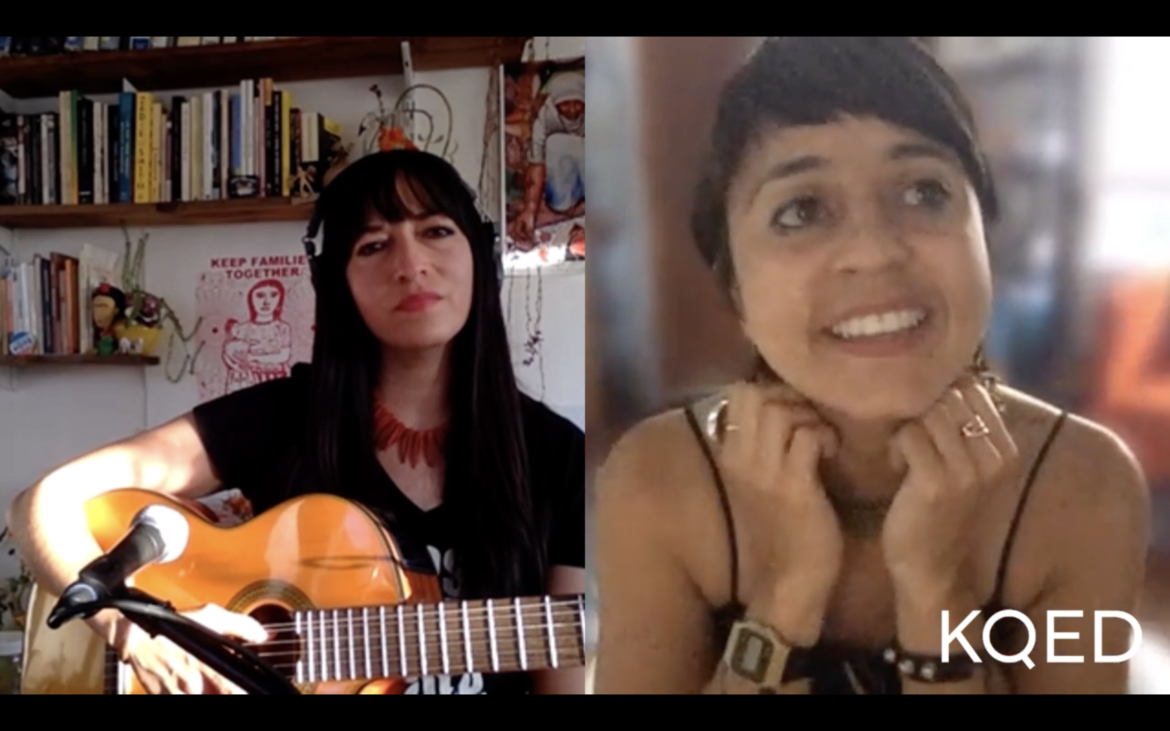 The festival, which features talks with politicians, journalists and community activists about policy and politics, drew more than 8,000 attendees for the three-day event last year, but the pandemic caused the nonprofit news outlet to change course.

“The reality was that there was so much uncertainty about what the rest of 2020 was going to look like,” Jessica Weaver, the Texas Tribune’s director of events and programming, told Current. “And we wanted to create a little bit of certainty in the midst of all of it and give ourselves time to craft a really awesome virtual festival.”

For this fall, the event’s planners have pivoted the festival from a three-day in-person festival to a monthlong digital event.

With the pandemic limiting large in-person gatherings, nonprofit news outlets and public media organizations that emphasize live, face-to-face events have been forced to rethink their strategies.

While organizations can move events into digital spaces, that may not be a perfect solution for connecting with audiences in ways made possible by in-person events. With many people working remotely, organizations are battling “Zoom fatigue” to hold the attention of their audiences. Moving events online also involves uncertain or falling sponsorship revenues.

As with so much during the pandemic, organizations aren’t expecting to go back to normal anytime soon.

“There’s a lot of uncertainty, to be sure, but we know that for the foreseeable future, our events programming, even when in-person gathering can resume, will likely be intimate, frequent, and hybrid (with a planned virtual or broadcast components) so that we can easily pivot should circumstances require it,” Ryan Davis, director of live events for KQED in San Francisco, told Current in an email.

Organizers of the Texas Tribune’s festival have been “rethinking every aspect” of the event, “from how people register to how people receive information about it to all the ways people actually experience the event,” Weaver said.

In reformatting the festival for online, Weaver said, the organization didn’t want to mimic the traditional festival. “We’re thinking about it digital-first in the same way that you would think about a digital-first news organization,” she said.

In addition to spreading content over 30 days rather than three, festival organizers are considering different ways to present content. Previous festivals have revolved around panel discussions around a topic. In the festival’s digital format, such discussions might take the form of two people on a screen at once instead of larger panels. The Tribune is also looking into offering podcasts or documentary videos tied into the festival.

“If you’re on Zoom all day for work, you don’t want to spend an extra hour of your free time doing the same thing,” Weaver said. “So we want this to be something that people want to do in addition to whatever is going on in our lives.”

Sponsorships have typically generated the most festival revenue, according to Weaver, and it’s hard to say whether that income will decline this year. “Barring outside circumstances, we’re still expecting a lot of support from sponsors,” she said.

Sponsorship wasn’t a factor in deciding to move the festival to 30 days, Weaver said, but expanding it to a month does give the Tribune “some space for opportunities that we wouldn’t have otherwise had in an in-person festival that moves so fast.”

Reimagining the festival for the digital space has “actually been a really good exercise internally” to think about what makes the festival “so special at the core? What is the identity of it?” Weaver said.

To replace the XPoNential festival, the station is airing full sets from past festivals that haven’t been made available previously every Friday through July. The station has previously shared clips of past performances but not full sets, GM Roger LaMay said.

During the weekend that the festival was supposed to take place — July 24–26 — the station will offer more archival footage on its website and commission artists who had planned to play at the festival to perform online.

LaMay said it’s important not to treat the digital events as “Oh, here’s a video.” “It’s more about, how do we create engagement around them?” he said. WXPN is looking to create merchandise around the festival and find ways to use social media “to do as many things as possible to create points of contact for people,” he said.

But LaMay doesn’t sugarcoat the loss of an in-person festival. Not only does it provide the station’s biggest opportunity to engage with listeners and members, it also generates content that the station can use on multiple platforms.

“Frankly, it’s not the same,” LaMay said. “It won’t replace the level of engagement, and it certainly won’t replace the money. But we’ll maximize it. … Our audience loves what we are and what we do and they understand what’s going on. And this will be the next best thing.”

The in-person festival usually sees its financial upside in sponsorship, LaMay said. Some sponsors canceled after WXPN scrapped the in-person event, but top sponsor Subaru committed to spending the money it would have devoted to festival sponsorship on other buys with the station.

“The sting really is in the loss of the ability to engage and connect with our listeners and audience and then the resulting sort of program elements that come out of that, which results in deeper engagement,” LaMay said. “The money certainly hurts, but it’s kind of the least of it in this case.”

Looking past the festival, the station has an in-person concert scheduled for Jan. 23. But “we hope to bring back Free at Noon in some way, shape or form before then,” LaMay said.

At least one station still plans to move forward with a live, in-person event in coming months. WJCT in Jacksonville, Fla., is selling tickets to a live performance in October at its WJCT Soundstage venue featuring ukulele player Jake Shimabukuro. The station declined to discuss the decision to move forward with the concert with Current but said in a June press release that ticket sales “may be restricted to ensure social distancing regulations are followed.”

Like other outlets, the station has turned to digital events. Since early April, it has put on 22 digital events using platforms such as Zoom, Facebook and OVEE.

In thinking about the kinds of content to create for digital live events, Davis said the station has looked to make events that “provide comfort, share usable information or instruction, create access to authorities responding to the pandemic (and more recent public unrest), and lift up voices uniquely affect by the crisis.”

But it has also looked to create “once-only experiences.” For instance, the station partnered with reporter Sam Harnett and his podcast The World According to Sound for an event where ticketholders received an eye mask “to disappear into soundscapes of life before quarantine,” Davis said.

While the digital events are free, the station has added an optional ticket price of $10–$20 for some events that weren’t partnerships with other stations or community organizations. About 10% of registrants for the events have paid for optional tickets, Davis said.

So far, more than 10,000 people have registered for the station’s digital events, and nearly 6,000 have attended, Davis said.

“The optional ticket offers modest revenue,” Davis said. “It can’t fully replace the more substantial ticket revenue that was our goal for this year; and we’re still finding our footing with how best to offer opportunities for sponsors of virtual events. But, as an experiment to see what kind of support our audiences are willing to offer this kind of virtual programming, it has been a surprising success.”

KQED has not yet scheduled any in-person events. Beyond following local health guidelines, it is also tracking research about public sentiment around live events using resources such as IMPACTS and the Audience Outlook Monitor, Davis said.

The station is looking into outdoor events or “site-specific, self-directed experiences that aren’t time-bound,” he said.

And when the time comes, “we know there will be a massive pent-up yearning for people to be together, and we’ll be ready to create those spaces for our community,” Davis said.

Amin Cyntje, director community engagement and live events at WBEZ in Chicago, said that even when in-person live events are able to return, “we expect some lag in audience comfort.”

“We are looking to state and local officials for guidance,” Cyntje said in an email. “When allowed, and if practical, we hope to introduce outdoor events before moving to indoor gatherings. We will ultimately make decisions on returning to IRL events based on public safety, our ability to ensure social distancing, if needed, and the comfort of our talent, events staff and volunteers who work our events.”

The station’s usual slate of in-person events includes a Podcast Passport Series, live podcast tapings of national and local shows, and live remotes of its midday talk show Reset. All in-person events have been canceled or postponed. The station’s first annual 5K race, which was scheduled for June, is planned for 2021. Until then, the station will continue to hold virtual events.

Since April, the station has hosted 11 digital events, such as author talks and a live production of its daily newsletter. During the events the station has been experimenting with Poll Everywhere to “take a temperature of the ‘virtual room’ to see how folks are doing and if our content is resonating with them”

“Virtual events make up for some missed IRL engagement opportunities but there’s no substitute for in-person gatherings where our audience can listen, learn and laugh together,” Cyntje said.